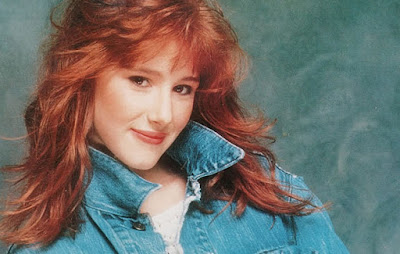 Yes that is a picture of 80s Pop singer Tiffany headlining Devlin's Domain. If that doesn't reel you in with curiosity I don't know what will. I assure you what lies ahead is just as disturbing, if not more, as everything else you'll find within the Domain. Come on in, I think we're alone now, there doesn't seem to be anyone around...

I can't speak for the rest of the world, but the USA is ridiculously obsessed with celebrities. I just spent hundreds of dollars at a convention getting autographs and photo ops with a bunch of washed up, grumpy, old, celebrities that don't give a shit about me. Of course my obsession was more with the characters they played and not the people themselves. I have no interest in candid photos of them going to get groceries or picking up their dog's poop. Believe it or not though, there are people out there that buy paparazzi magazines filled with the worst photos of famous people performing the most irrelevant tasks.

Recently celebrities have been using their popularity to influence people's opinions on current political issues. It's not an uncommon thing, but seems to be turned up a notch lately. I don't know if this is actually effective, because it seems like they are "preaching to the choir" for the most part. I don't see any merit to their opinions on these kinds of issues personally. Just because they're famous doesn't mean their opinions are more important than anyone else's. There probably are some mindless, gullible people out there that will let celebrities tell them what to think unfortunately. These are probably the same people that buy the Us Weekly magazines at the grocery store checkout line.

It's one thing to blindly believe anything a celebrity says, but there is another tier of celebrity obsession that is undeniably insane. It is often referred to as Celebrity Worship Syndrome and is broken into multiple categories. The least severe are Intense-Personal, which is where one may feel that they are soulmates with a celebrity, and Borderline-Pathological, which is where one would go to great lengths and lots of money to acquire personal belongings or minor objects used by celebrities. I can't imagine paying thousands of dollars for Mel Gibson's used toothbrush, but somebody would.

The Erotomanic form of CWS is especially bizarre. It is the least common form of CWS and the Erotomanics are the least likely to engage in a face to face encounter. It is when a person believes that a celebrity is in love with them. They really go off the deep end when they think that a certain celebrity is communicating with them through hidden messages in interviews, movie lines, or songs. Like most of the more extreme forms of CWS, it could be a result of schizophrenia, bipolar disorder, or depression.

Long before Brittney Spears and Christina Aguilera dominated the Pop music landscape, Debbie Gibson and Tiffany were singing other people's songs in shopping malls and being exploited for quick profits before being discarded completely in favor of younger faces. They were a couple of the first teen idols after the emergence of MTV, but have faded into obscurity and have been forgotten by most. A couple of one hit wonders that tried staying relevant by posing nude for Playboy and later starring in cheap SyFy Channel movies that nobody watched. 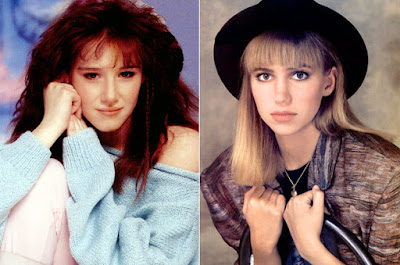 Tiffany would seem a very unlikely candidate for celebrity stalking, but as 50-year old Jeff Turner reveals in the opening of the film, he's psychotic and thinks that they are in love with each other. He claims to have kissed her, with no tongue, and brags about the restraining order he got after a physical encounter he had with Tiffany when she was 16 and he was 35. He seems very cheerful about the whole thing, which may be because he just found out that she just moved back to California where he lives. 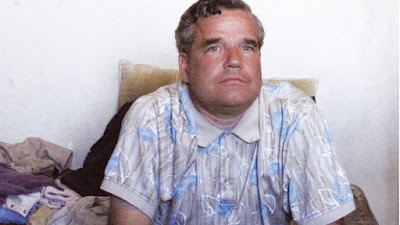 We jump over to Kelly McCormick, who is a 38-year old hermaphrodite from Denver, Colorado. We see some shots of her running through town and at the gym before seeing the inside of her house, which is a shrine to Tiffany. She claims to have been friends with her in 1989 and that Tiffany doesn't remember her. That doesn't stop her from being in love with Tiffany though and attempting to pose seductively against pictures of Tiffany that are covering her walls. It's pretty creepy actually. 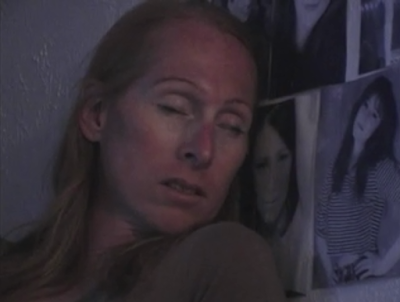 The documentary starts shedding light on some of Jeff's background and how he suffers from Asperger's Syndrome. It throws in some interviews with friends and family and they basically say he has mental problems. Kelly also suffers issues from being born intersex and dealing with people's reactions to that her whole life. She goes into more detail about the condition and what medication she needs to take. She also thinks she's a great runner even though she was winded after 30 seconds of jogging. The delusions are very apparent. 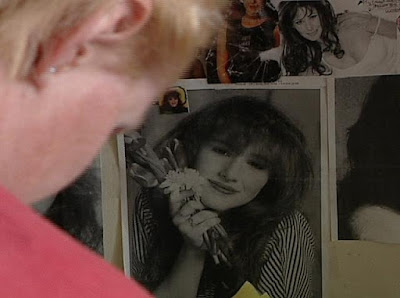 Jeff's friends admit that he has an unhealthy obsession with Tiffany, but don't believe he's a danger to her. They say it's basically a side effect of his disorder, as he obsesses over many different things. He shows off his collection books about stalking/stalkers and his newspaper and magazine clippings of Tiffany articles. He seems like a nice, well spoken guy, but seems like he could snap at any moment. One of Jeff's friends claims Jeff has connections to people within secret societies and is privy to information nobody else knows about. Jeff then shows off his bicycle helmet that he has hooked up to a crystal through a bunch of wires that he claims connects him spiritually to Tiffany. 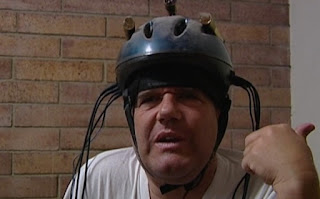 Kelly vents about her spiritual connection with Tiffany and how she had visions and a bunch of other hogwash. These people are fucking crazy. Kelly has an emotional breakdown over how she's being pushed out of Tiffany's life, because she is getting married. They're supposed to be soul mates even though Tiffany has no idea who Kelly is. There is an outdoor shot of Kelly wearing sunglasses where she looks a lot like Marilyn Manson. It's hard to decide which one is the crazier of the two. 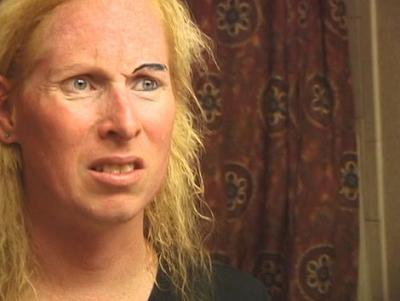 Both of these whack jobs claim to have talked with Tiffany privately on multiple occasions. Jeff walks around the beach where her concert is scheduled to take place and talks to her fans. He tells them all he is a friend of hers and tries to one up everyone who claims to be her biggest fan. There's a creepy encounter in the hotel where Tiffany is signing autographs and taking pictures and Jeff invades with nonstop conversation. I can't imagine how uncomfortable that was for her, but she still went and took pictures with him instead of having him hauled off by security. 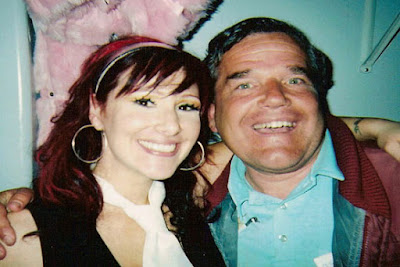 Closer to show time Kelly and Jeff meet and we find out that Kelly will be staying with Jeff on this trip. Definitely one of the oddest pairings I've ever seen. If they didn't have a common obsession I don't see them getting along at all. Kelly gets all dolled up for the show and the close-ups of her makeup application really made me nauseated for some reason. I mean, they zoom in on her eyeball while she stabs it with eyeliner. Not the best makeup job I've ever seen. 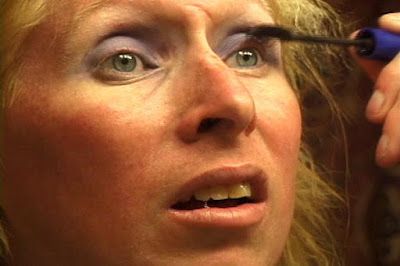 This was a very informative look into the psyche of some of the most celebrity obsessed people. I don't really understand it any more than I did before, but it's obvious it's mostly attributed to mental disorders. Jeff seems to be coping with his issues well, but Kelly is just a sad and lonely disaster. This was filmed in 2008 and there's no telling where these two are now, if they're even still alive. Based on what I've seen here, if they're still alive then they're still fucking crazy. 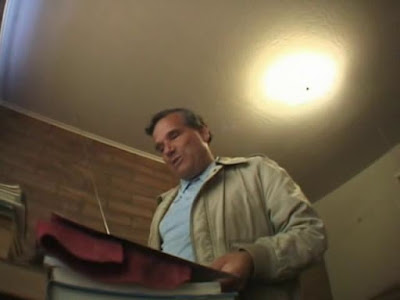 IMDB has the film rated at 6.8. It's not really the most polished or entertaining documentary, but it is definitely interesting and gets points for weirdness. My score for this is 6.5. I've watched it twice so far and that's enough for me. At least until I have to show somebody else. I told you it was disturbing. If you want more then check out the next edition of Devlin's Domain.

About Me: I have a couple of different aliases, but for this column I will use my middle name. I am Devlin and I currently reside in Atlanta, GA. 33 years of age and still feeling immortal. Former Rockstar, current Pro Wrestler and hell, I'm still a Rockstar at heart. I got my first taste of obscure cinema when I was about 8 years old. My Dad would take us to the video store every weekend to stock up on classic horror films to watch on his projector. They were mostly harmless, PG-rated horror films like the great Universal monster movies. Then one night he rented a movie for himself to watch after we had gone to bed. I was so intrigued by this film that I wasn't allowed to see. I begged and begged and he eventually caved. That night I was exposed to a film unlike anything I had seen before. Ever since that night I wanted to find more films that gave me that same sensation. I wanted to feel shock and disgust. I found my place in the Horror aisle. The film I watched was Faces of Death. Thanks Dad.www.facebook.com/DevlinValek
Posted by Devlin at 12:43:00 PM