Are You Still Not Watching Star Wars Rebels? 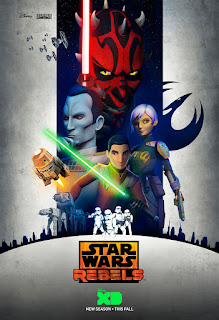 Back in May last year I strongly encouraged you to start watching Star Wars Rebels. In case you missed it or just want a recap of why you should have started watching last season you can do that here. Some of you may have listened, but some of you likely didn't. I get it; we're all busy, and there's so much else to watch that cartoons can sometimes fall by the wayside. Well if you didn't listen to me last year let me try again because as good as season 2 was season 3 has been downright great. And one word: Thrawn!

The third season started last September, and as of this writing there are only 2 episodes left. So if you're behind you have a few weeks to catch up before the finale the the end of February. And from the looks of the mid-season trailer I don't think you'll want to miss it. I know at least one person who hasn't even started the season yet so I'll keep clear of spoilers as much as possible, but I can't sell the show without giving out a little information. 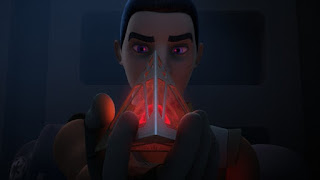 Last season Maul tricked our young hero Ezra into helping him steal a Sith Holocron which somehow gives power as well as the usual informative stuff a Holocron would contain. Thanks to some quick thinking by our heroes Maul got screwed, and Ezra got the Holocron. At the start of the third season Ezra is using the Holocron with some dangerous side effects. There's also a Jedi Holocron, and if Maul get his hands on both Holocrons things could go really badly for the rebels. Ezra has lots of magic Jedi visions that end up leading him to think that the rebels have to find Obi-Wan Kenobi to save the alliance. 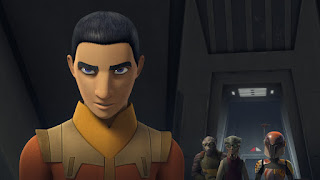 In general the Rebel Alliance is getting stronger all around, but they're walking a fine line by seeking more power. Sure power is good, but everything has a price. Some old friends show back up, but they also make a lot of new allies. Wedge and Hobbie are students at an Imperial academy that defect to the rebels side (I know that the EU has a much different back-story for Wedge, but we're in Disney times now people. Let it go). As far is bad guys go there are some old and new faces in there too. Maul is back, but they made the wise decision to leave out Darth Vader this season. I love Darth Vader and all, but since they've added Grand Admiral Thrawn into the mix I'm fine with him not being around anymore. I personally find Thrawn way creepier than Vader. I had really hoped to interview Timothy Zahn at Dragon Con last year to ask how he felt about finally seeing one of his most iconic characters on screen. Sadly, it was not meant to be, but since he's got a new Thrawn book coming out in April I've got my fingers crossed for this year. Thrawn doesn't really actively do much to the crew of the Ghost. He instead spends his time following them to see how they react to the situations they get into. He watches how they respond to threats, and is clearly working on a long game here. He lets them escape so many times that he just has to be working towards something big. I can only speculate that when he does make his move it's going to be brutal. 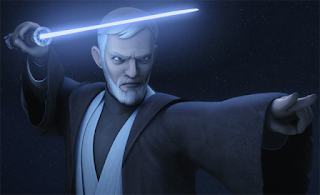 Just like the first few seasons there are throw away episodes that don't really advance the story. In particular this season they try to help a bunch of idiot kids who are flying around in a broken spaceship taking on the Empire by themselves. Half an hour of convincing kids that they can't take on a Star Destroyer is way too much. "You don't want to come with us? Okay, well there are two or three Star Destroyers on their way. Have fun dying a quick, painful death. Bye." I am a heartless bastard though so I guess it would have only made for a five minute show if I were in charge. On top of the returning cast of excellent voice actors they have some great guest voices as well. Tom Baker (the 4th Doctor Who), Sam Witwer (he did the voice of Starkiller in The Force Unleashed video games), Forest Whitaker (reprising his role as Saw Gerrera from The Clone Wars and Rogue One), and best of all Lars Mikkelson (brother of Mads who is one of the best creepy bad guys ever) as Grand Admiral Thrawn. But if all that hasn't convinced you take a few seconds to watch the mid-season trailer on youtube. If you don't have those seconds I'll sum up the end (since that's the most exciting part anyway) Obi-Wan is sitting in front of a fire, and he looks up to see Maul and draws his lightsaber. You know that's going to be a great show down. Jedi may be all peaceful and shit, but I'm certain that he's still like some revenge. I, for one, want to see that revenge. "I cut you in half too quickly last time." Awesome.

So hopefully I've finally convinced you to get on board with Star Wars Rebels. If not, message me and I'll keep trying.