A couple of years ago I sold all of my Mattel wrestling figures in one shot. I decided that I had to call it quits because I’d rather plunk down twenty bucks for a monster or a superhero or a robot than for a guy in his underwear (He-Man and pals notwithstanding). I still follow what comes out and if they release Steven/William Regal figures then I am, by God, going to buy them. But I don’t want to devote my money or valuable space to a whole wall of plastic grapplers.

That being said, if a company is clever enough and puts out toys that have just the right gimmick – like the awesome WWE Zombies – I just can’t resist.

Mattel has, once again, hit my sweet spot with these (unfortunately) Walmart Exclusive Retro figures, which are based on Hasbro’s WWF figures from the 90s. I didn’t collect them back then, but years ago I happened across a thrift store that had bags full of them for three bucks apiece. A collection – and a new toy love – was born.

The Hasbro WWF style is totally silly and seem to be loosely based on Hulk Hogan’s Rock N’ Wrestling, despite the fact that the show had gone off the air four years before the figures were released in 1990. They have limited articulation and each one sports an action figure that may or may not be appropriate to that character. But they’re charming as heck and in their own way are fantastic likenesses of the grapplers of the era.

Side Note: I’d be willing to bet a dollar that most casual observers would say these are 80s toys. Any time I write about the Hasbro WWF figures I have to double check to make sure. I feel so strongly that they were a part of my childhood, but I was 14 in 1990. Which actually explains why I didn’t ever buy any when they were on the market. I’m sure I thought they were silly. Unlike the Teenage Mutant Ninja Turtles I was collecting at the time.

I don’t actively hunt the Hasbro figures, but when I see ones I don’t have for a reasonable price – at Joelanta, for example - I buy them.

Mattel first showed us these throwback figures at last year’s Toy Fair (I think). I knew I had to have them. Hopefully we’ll see more in a few weeks.

Thanks to our pal, Chris DePetrillo, I knew that these had hit and started hitting Walmarts a little harder than usual looking for them. I lucked out and found all four figures from the first shipment wave after coming up dry several days in a row. I was actually looking for their Exclusive Star Wars Black 3.75” Scarif Stormtrooper at that point, expecting that the WWE figures hadn’t made it to Georgia yet.

You’ll notice that there are only three figures in this review, though there are four in the first wave of shipments. That’s because the fourth figure is Roman Reigns. I may be a slave to collecting, but I don’t buy characters I’m not interested in (unless he had come with a Braun Strowman build-a-figure part). You might also notice that there are actually six figures on the back of the card. Undertaker and Ultimate Warrior are apparently shipping later, which is an annoying thing that seems to be happening lately. Initial carded Madballs shipments from Just Play did not include Horn Head and Slobulus; they’re on the way now.

Better late than never, I suppose (thinking of you, Dani Moonstar). 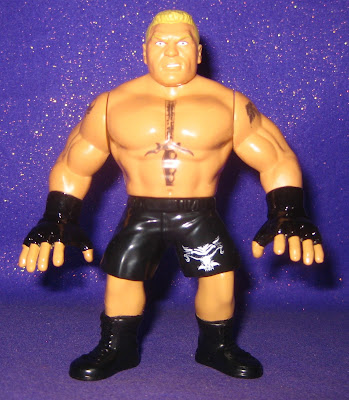 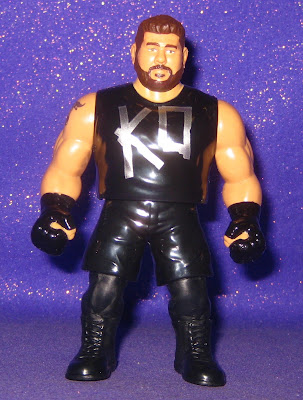 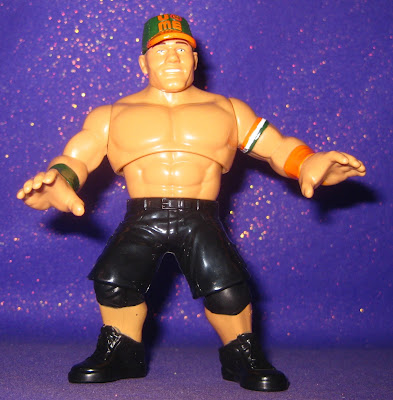 These are goshdarn freaking delightful! LOOK AT THEM!

At a glance these are perfect facsimiles of the Hasbro WWF figure style. The proportions, amount of detail, and paint seem just right. But it’s going to take closer inspection to see if they truly capture the magic of Hasbro’s seminal Superstars. 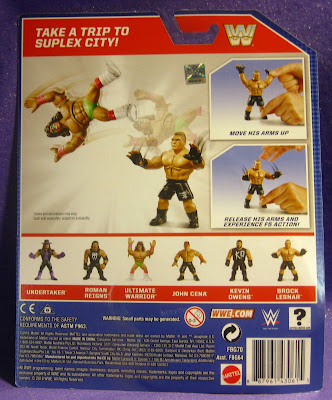 Mattel used the same blister card style that the original figures had, which was definitely a key to selling these. They missed a few details like the signature and using a picture of the figure rather than an illustration, but it all works and honestly looks a little classier than the old figures. But also less fun. But they still get credit for almost nailing it. And I can’t care too much because I am absolutely opening these up. 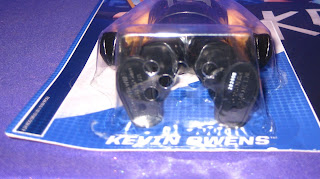 There are holes in the bottom of the blister to ventilate a strong New Toy Smell. It's still there when you open them. 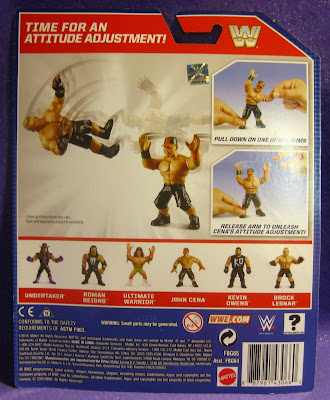 The back depicts the figure’s action feature and the other available figures. Classic cardback.

Kevin Owens and John Cena are dead-on (cartoony) likenesses, while Brock Lesnar merely achieves “looks like Brock Lesnar, mostly”. The difference maker will be if Mattel releases a Paul Heyman. 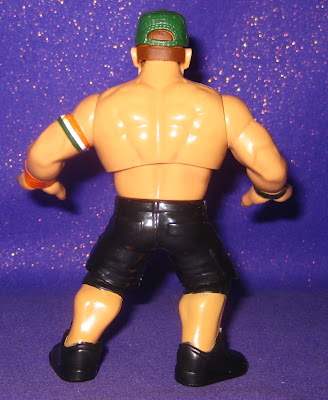 Cena has his signature hat on. Normally I wouldn’t like a non-removable hat, but these figures are a whole different reality from the norm. They come from a magical dimension where Hogan wrestles in a shirt, Sgt. Slaughter keeps his hat and sunglasses on, and Jake the Snake finishes his opponents with a “Python Punch”.

Things are different here. Cena can keep his hat. 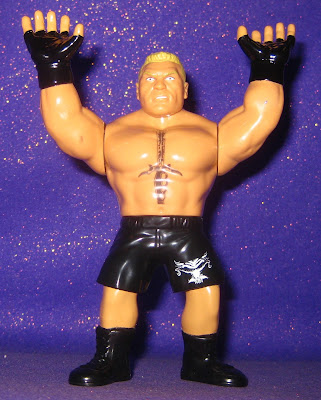 Each of the figures features a unique sculpt that accurately represents the wrestler. Lesnar is noticeably huge and scary. Cena is jacked up. Owens… has a shirt on. The style is unbelievably faithful to what Hasbro did. The musculatures are cartoony and exaggerated and they are all in different fighting stances, ready to rumble.

I’m very impressed with the gear. Mattel didn’t cut any corners – the boots, gloves, kneepads, whatever are all sculpted parts with just the right level of detail. Even Cena’s trademark armband (the one AJ Styles – and oh, how I want an AJ in this line – hilariously wore as a headband) is an actual sculpt and not just a paint job.

Speaking of paint, the paint apps on these guys are great. Not in the context of modern toys, but as far as capturing the look of the Hasbro line and being precise and accurate. 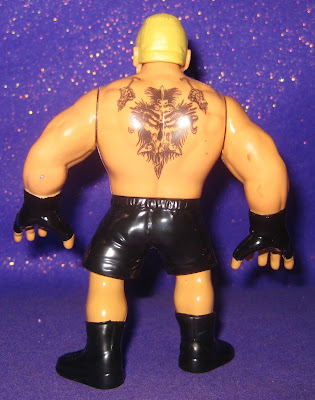 Lesnar has all of his tattoos and they look darn good. Mattel used a faded grey rather than outright black so that they’d have the right look. His face and hair are tight and clean. The only thing missing here is the Jimmy Johns logo on his shorts (and Paul Heyman). 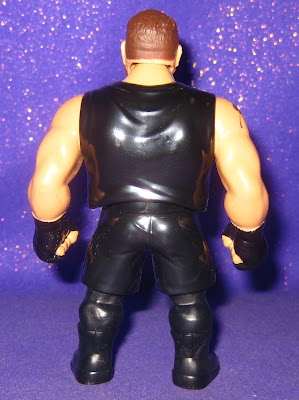 KO didn’t get quite as thorough a tattoo treatment as Brock, as he’s missing the “EVIL” tattoo on his left forearm. But the duct tape-look “KO” on his shirt is solid and his hair and facial features are applied perfectly. And he does have the bull on his right shoulder. 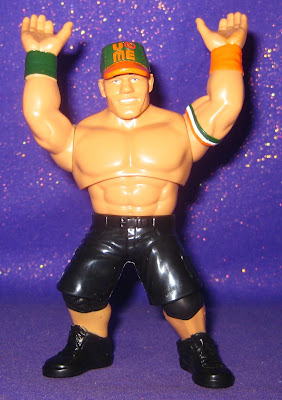 Cena is the most colorful of the three with his hideous orange and green gear. All of the colors stay where they are supposed to. There’s no bleeding and everything is correct. The lettering on his hat is particularly nice. I kind of wish they’d gone with the blue jorts, but Cena wasn’t wearing them at the time this figure was designed.

Side Note: Speaking of Cena, he has got to be geeking out over these. I don’t know that he’s a toy collector or anything, but we all know when he grew up and how big of a fan he is. I bet he had ALL of the Hasbro figures. 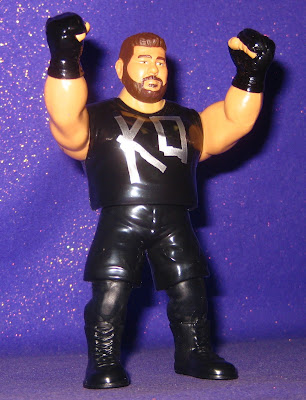 Finally – and I hate to point it out – there’s the one botch that keeps these figures from being absolutely perfect. The skin tone is wrong. The Hasbro figures are much brighter – pinks and oranges almost. These are all a much more natural skin tone. As such, they stick out like sore thumbs from my Hasbro collection. I still think they’re awesome, but I sure do wish Mattel had gotten that right. As tremendous as every other aspect of these is, it makes it all the worse that they blew such a big and easily noticeable element.

No accessories. Tables, ladders, or chairs might have been nice, but in all honesty I don’t need anything. None of these guys has a specific thing that they carry to the ring (except for Brock, who has Paul Heyman), so I’m good. But if they do Kevin Owens’s best friend Chris Jericho he had darn well better come with a scarf and THE LIST. 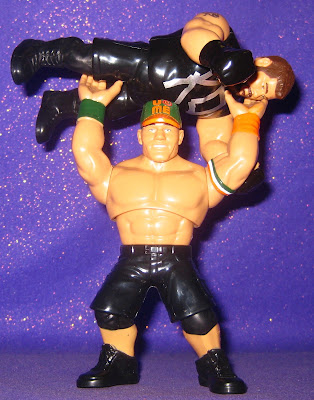 While these have minimal articulation, they are fun TOYS. The heads are on ball joints and the shoulders and waists swivel. But the big draw is the action features. Each figure has a spring-loaded (or something) feature that very, very (in some cases barely) approximates the character’s finishing move.

John Cena has an abdominal gimmick that springs side to side and sort of does an Attitude Adjuster when you place a figure in his hands over his head. It works and it’s fun to do. 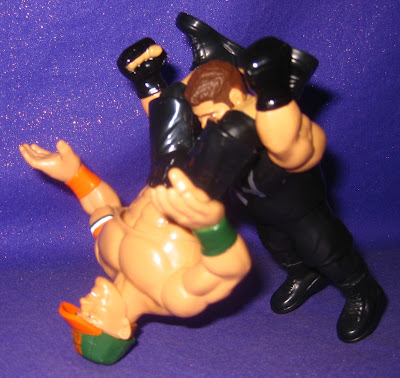 Kevin Owens has an abdominal gimmick that springs the other way. Since the figures don’t bend at the waist (and shouldn’t), it doesn’t really look like the Pop-Up Powerbomb (a terrible finisher with an equally terrible name), but it’s still fun and works okay. OK. KO. 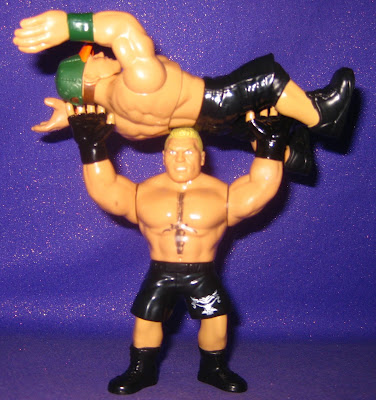 Lesnar’s move doesn’t really look like anything that Brock Lesnar does. His arms are spring-loaded and he basically just throws other figures. It looks nothing like the F-5 or a suplex of any kind. But it’s the most fun feature of all three and works super well.

These are fantastic. At $9.99 apiece I feel like they’re a steal. For unique sculpts with action features and a HUGE nostalgia factor, I would call these some of the best figures on the market right now for the price. I will buy every single one they make of any wrestler I even remotely like.

If you’re a fan of wrestling or old-school toys, these are worth a look. I wish the skin tones were different, but they’re still awesome. And once I’ve got more of these in my collection, these three won’t seem to stand out so much.

Cena, Lesnar, Owens, and Roman Reigns are in Walmarts everywhere now. From what I understand Undertaker and Ultimate Warrior should be hitting in time for the Royal Rumble.
Be sure to follow me on Facebook, Twitter, and Instagram for all of the latest toy news and live reports from the sotres that carry them!

If you enjoy WWE, toys, or Needless Things, you might enjoy SupportPhantom.com.

Posted by Phantom Troublemaker at 3:04:00 AM