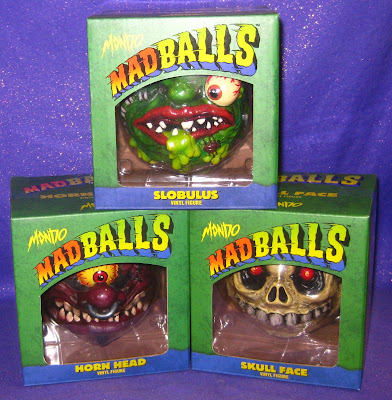 We are living in truly strange times.

After first being released over thirty years ago and receiving a brief revival thanks to Art Asylum in 2006, Madballs are back! But they’re back in a much bigger and more widespread way than I ever would have anticipated.

Early last year Mondo announced that they had licensed Madballs from American Greetings and would be producing vinyl toys not just of the original Madballs, but of other pop culture characters in the Madballs style. The first example shown was a Madballs version of Venom, the Marvel Comics character.

I was immensely excited by this news and preordered the first series – the three figures I’m looking at today – as soon as they went up on Mondo’s website. At the time they were estimated to ship in August.

As the year went on, there were even more surprises in store for Madballs fans.

In June, American Greetings announced a partnership with a company called Just Play that would produce a new line of Madballs that were actual toys for kids. Just Play has all-new designs for the classic Madballs characters and will be releasing new balls, toys, playsets, and even a series of animated shorts!

This, to me, was the best possible Madballs news. Collectibles aimed at people my age are nice, but are going to be expensive and potentially a pain in the ass to get. Actual toy lines, on the other hand, are designed to sell to a mass market and to essentially perpetuate franchises. Niche collector lines don’t have to worry about supply, consistency, and longevity as much as a real toy line that is battling for shelf space at Walmart.

Not everyone loved the new designs from Just Play, but I do. They’re updated to what I think are modern kid sensibilities and my son was much more enthusiastic about them than he has ever been about the original designs. In the toy business, evolution is a necessity.

Finally, we learned that Kidrobot was going to be producing items aimed at collectors under the guiding hand of artist Frank Kozik. This was the most baffling announcement, as it seemed to be horning in on the business that Mondo had signed on for.

In record time, Kidrobot got a line of blind boxed Madballs keychains to market and very quickly followed up with “medium” vinyl figures (about 6” in diameter – almost twice as big as traditional Madballs) and blind boxed “mini” figures (which seem to be about the size of the original Madballs; I find it odd that Kidrobot doesn’t define their size on the order page).

I ordered six of the keychains as soon as they were offered – for immediate sale, not preorder – mainly because I was so excited for new Madballs product. I did not actually need six keychains. They arrived before my Mondo Madballs.

The keychains look great, but they’re keychains. They’re gonna end up in a drawer because I don’t know what else to do with them. I honestly probably shouldn’t have bought them. As a matter of fact, if I hadn’t bought them, I might be more willing to order a few of the mini figures. I haven’t seen them in person, but I don’t totally love the online pictures. They look a little amateurish. And committing to blind box figures at ten bucks apiece is not something I like doing. I think the price would be perfectly fair for carded figures, but the whole blind box thing is a huge turn off for me.

My Mondo figures did eventually arrive just before Christmas. Between those, Kidrobot’s surprise offerings, and the new toys from Just Play (which should be hitting Walmart and Toys R Us literally any day now), we are flush with Madballs product and I couldn’t be more excited.

I wasn’t crazy about my experience with Mondo. The basic attitude of the website seems to be, “Give us your money and we’ll send your stuff whenever it’s ready”. Don’t expect updates or notes when ship dates aren’t met or anything else. Now, I did email them at the beginning of November to ask what was going on with the Madballs and got a very prompt response, but that was after months of wondering what was going on.

Additionally, a set of Madballs Christmas ornaments were offered at the beginning of December. It was made clear that they weren’t expected to ship until January, which is fine because I expect there to be many more Christmases. What was not fine was that a couple of days after I preordered them from Mondo, Middle of Beyond put them up for actual sale and had them shipping before Christmas. There was some dirty pool somewhere in this deal, and it seems to have been from Mondo.

My ornaments have not, as of yet, shipped.

These collectible figures from Mondo look straight-up classy, which is an odd thing to say about Madballs. From the boxes to the interior casing to the peek at the figures themselves, the presentation is exciting. These were twenty bucks apiece (or $55 for all three) and I have to say that they look like $20 items. 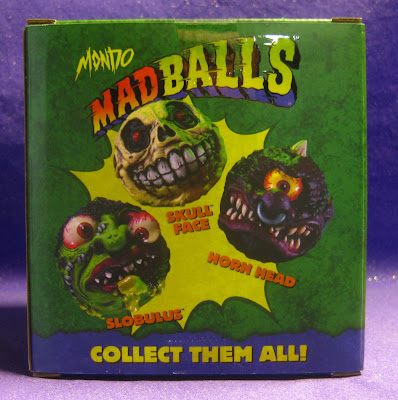 The boxes are gorgeous. They sport flat backgrounds with glossy graphics, a combination I always like and feel adds class to a product. The printing is bright and clear. Each box makes the products look like exactly what they are – fancy versions of gross kids’ toys.

I love how the front window offers just a peek of the figure. Inside, there is a two piece clamshell holding the ball in place. The packages are completely resealable aside from the tape you have to cut to get into them. That’s a big win. 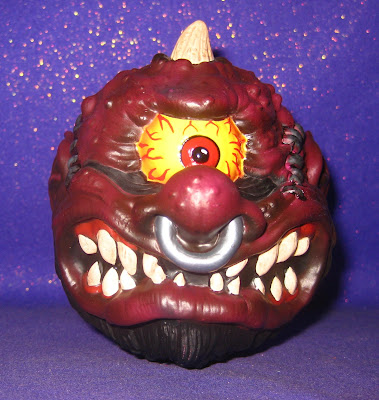 While each of the characters is wildly different, I’m just going to run them down as a whole and point out a few specifics here and there.

These are like high definition versions of the Madballs I had when I was a kid. I don’t have any of the originals anymore, so I’m having to go off of memory, but these Mondo figures seem to have more fine detail and texture than any of the toy versions. That makes sense because the vinyl is a better medium than foam for such things. Not only that, the paint apps are absolutely gorgeous. 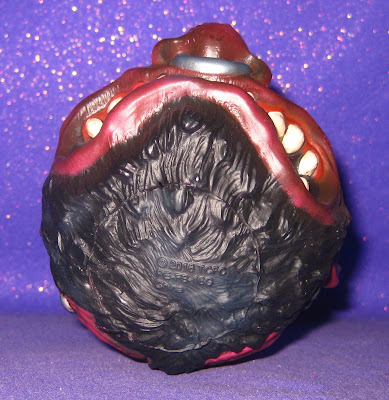 There’s a bit of unavoidable flash around the production stamp on the bottom of each figure. Mondo kept it to a minimum and it doesn’t detract from the in-hand or front-on look of the Madballs at all. Otherwise from every angle these are incredible figures. 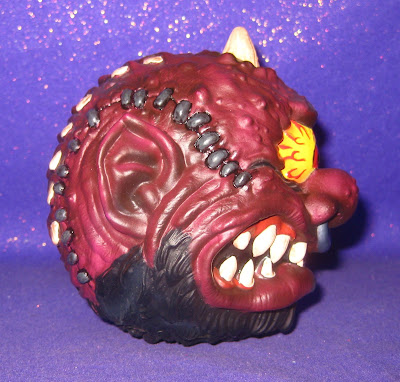 Horn Head was never my favorite Madball. When compared to giant eyes, skulls, and slobbering monstrosities with goo everywhere his cyclops/unicorn act just didn’t compare. But Mondo’s take on the guy ups the ante in every way. With distinctive fangs, a thick beard, and overall better proportions this Horn Head achieves true monster status. 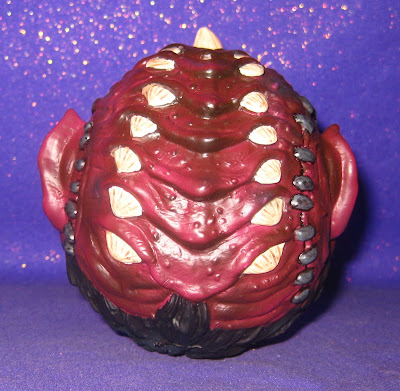 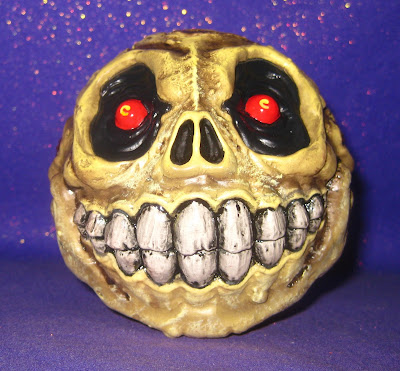 Skull Face’s game has been upped, as well. The 2006 version had a tongue that I never liked. Mondo wisely chose not to incorporate that – it seems that all of these are enhanced versions of the original designs and mostly ignore the Art Asylum relaunch. 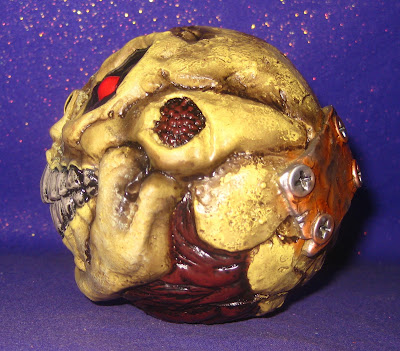 Mondo went all-out on the gristle and gore on this one, with brain and neck muscle exposed in a much more graphic manner than the original character. This update goes far beyond being “just a skull” and has made Skull Face more of a unique character. 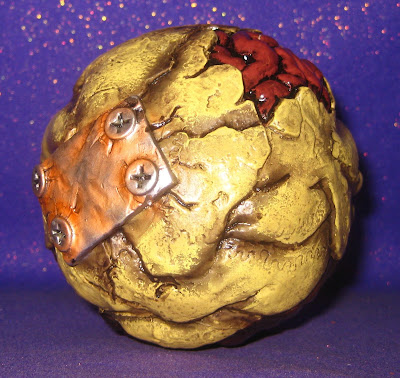 The paint apps go a long way toward defining Skull Face, with tons of shading and dark washes to bring out all of the sculpted details of the skull and the meaty bits. I particularly like the deep, glossy black of the eye sockets surrounding the red “pupils”. 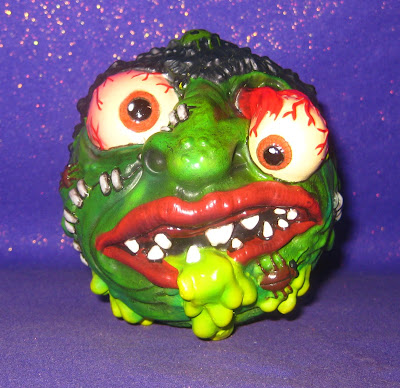 Slobulus is the crown jewel of these three Madballs. He is probably the best representative of not just the Madballs toy line, but of what 80s gross-out toys were all about. He’s slimy, malformed, possibly diseased, and almost uncomfortable to look at. Any one of Slobulus’ defining features could have been enough on its own – the slime bubbling out of his mouth and stitches, his ghastly green skin, or the eyeball hanging by a thread of gristle down to his cheek. But no – Slobulus is just one huge ball of nasty bits. 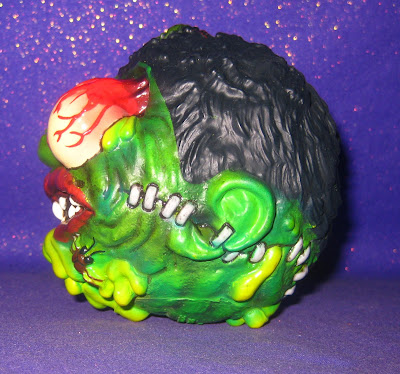 I love how the stitching on this one runs all the way around the head – from nose to cheek. The eyeballs and slime have a glossier finish than everything else and look great. I wasn’t a huge fan of bugs being on Madballs because 1) they seemed like extraneous design elements that actually distracted from the characters’ inherent grossness, and 2) I hate bugs. But the lil’ roaches on Slobulus only help to define what a reprehensible brute we’re dealing with here. 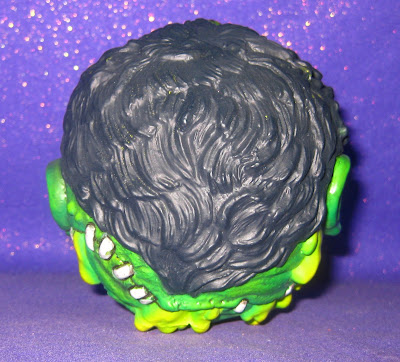 The back of Slobulus’ head might seem slightly dull, but the sculpt is so messy and matted that I am grossed out just by the idea of what kind of head of hair this guy would really have.
Each of these figures is a thoroughly satisfying representation of a “best case scenario” for the character. The designs are fantastic and the sculpt, paint, and final execution are flawless. I might not have loved Mondo’s “you’ll get it whenever” presentation, but I can’t deny that the results are great. 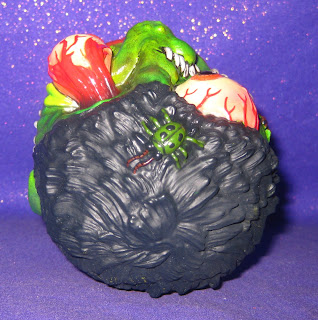 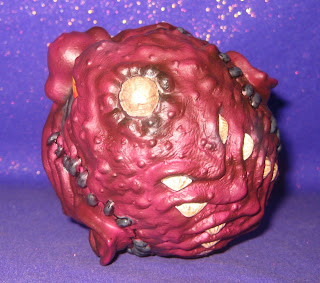 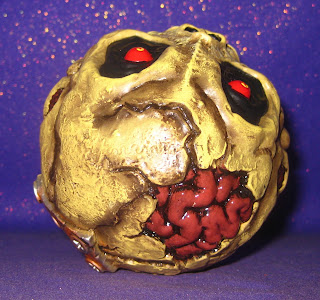 They’re balls. I’m not going to throw mine around because they cost $18.33 apiece, but I could if I wanted to. And it would be fun. 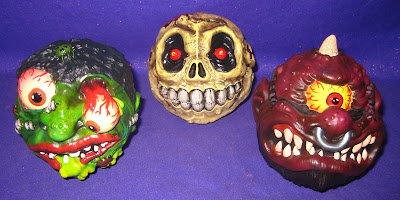 Mondo’s Madballs are works of art. I sort of understand the fascination with vinyl collector toys because of these.

You know what the best comparison is for them?

When you get your hands on a toy you had when you were a kid and it doesn’t look how you remember. The sculpt isn’t as good, the proportions aren’t as realistic, or it just doesn’t look as good, somehow.

These Madballs are how you remember the originals. They didn’t look anywhere near this nice, but your brain probably saw them this way. These are the idealized Madballs that have been in my 80s gross-out toy-loving brain for decades. They’re priced as collectibles and are worth it, but are sturdy and definitely great toys.

I don’t know what the future is for Madballs from Mondo. They haven’t announced any further releases and haven’t even put the Venom Madball up for preorder. The combination of the lack of news and of Kidrobot’s very similar offerings has me speculating about American Greetings’ satisfaction with Mondo’s ways.

Personally, I would love it if Mondo produced reproductions of every single original Madball. I’d skip the more specifically sporty ones, but I would buy all the rest. I’d just like for them to be a little more timely with the production and release schedule. Whatever the case, I expect to know something after Toy Fair this year, the anniversary of the original announcement for these three.


Just for fun, here are pictures of hot girls in Slobulus dresses: 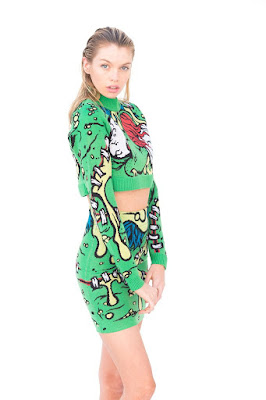 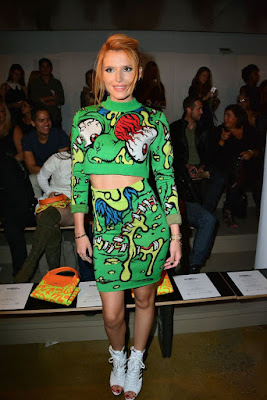 If you enjoy toys, toy collecting, or Needless Things, you might enjoy SupportPhantom.com.