Devlin's Domain - Perfume: The Story Of A Murderer 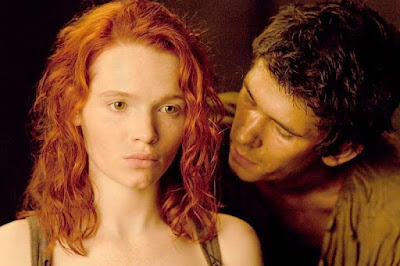 The entertainment industry has a few restrictions as far as what senses they can stimulate for your enjoyment. For the most part they focus on your sense of sight and sense of hearing. That leaves three senses totally unattended to, unless you're counting the theater popcorn. But what if you could smell a movie with your eyes? Weird, right? If you're interested then proceed in the Domain.

Believe it or not people were smelling movies before they were hearing them. Before sound was available for film, theater owners would use different methods to generate scents into the theater. Some would soak cotton in rose oil and place it in front of a fan for example. Others would literally just spray perfumes during different scenes. These were early incarnations dating back to the early 1900s of course. Eventually somebody would come along and develop a system for theaters to use for this effect.

In 1969 Hans Laube created what he called Smell-O-Vision , which was a belt of perfumes arranged in order of release and wound around a motorized reel. These were placed beneath the theater seats and were said to be as accurate and efficient as a soundtrack. It was only used for one movie though, a mystery-comedy titled Scent of Mystery. The reception for Smell-O-Vision wasn't great due to technical problems. The experience differed depending on where you sat in the theater. Even after working the kinks out, the product wasn't able to recover.

The gimmick of smelling your movie had disappeared until 1981 when the whacky John Waters came out with his film, Polyester. Odors were an important part of the film so, inspired by Scent of Mystery, he developed Odorama. Odorama was just a scratch-n-sniff card with 10 numbered scents that would be cued on screen. The DVD release of the film actually comes with a working Odorama card. To my knowledge this was the last scented film experience.

2006 comes around and there's finally another film that could use the Smell-O-Vision gimmick, but the expense isn't worth it. What is a filmmaker to do? Tom Tyker knew exactly what to do. He used sight and sound to communicate smell. How the hell he managed that, I don't know. This guy is definitely an artist and brings Patrick Suskind's novel to vivid life. This is...

Perfume: The Story Of A Murderer


Ben Whishaw plays the main character and notorious murderer, Jean-Baptiste Grenouille, who is being sentenced for his crimes at the beginning of the film. The film then jumps to narrated flashback of Grenouille's life, starting at birth. He was born in one of the worst smelling places imaginable, a French fish market. His mother worked at the market and goes into labor while gutting fish. She fell beneath her market stand to push the child out. The poor kid was born onto a pile of fish heads and maggots. The mother was a bit of village whore and had been pregnant numerous times. The children were always stillborn, so she assumed this one was and left it in the pile of fish remains to be tossed away later. The imagery for the baby's surroundings is disgustingly beautiful and really gives you a sense of the absolutely filthy stench of the market. 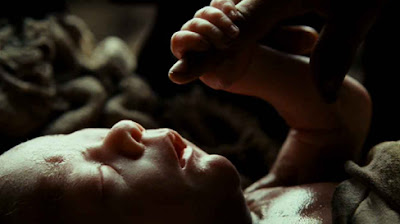 Overwhelmed by the smells all around him, the baby let's out a cry that alarms the people in the market. The mother runs away from the child and is put to death for trying to kill the child. Jean-Baptiste is then taken to an orphanage to be raised. Right off the bat the child's superhuman sense of smell is made known. He grows into a detached outcast and still can't talk by age 5. But he can identify objects by their scent and can reproduce an environment in his mind just by closing his eyes and smelling. Being seen as a burden, he is sold off to work at a tannery. The physical work toughens him up and he survives longer than most expected. he is eventually chosen to make a delivery to Paris, where he enters a whole new world of odors. The camera guides you to all the places his nose travels. 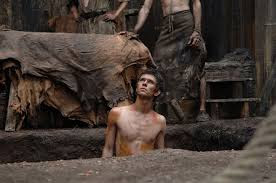 He comes across a perfume store and gets lost in all the different smells that are being sprayed around. One particular smell sneaks up on him from the street. He is immediately obsessed and finds that it is coming from a red haired girl. He follows her and she is scared off by his awkwardness. He keeps following her and trying to sniff her. She cries out for help so he covers her mouth and ends up accidentally suffocating her. Like a true creep he mounts her corpse and takes long whiffs of her dead body. Eventually the scent fades and he is overcome with the desire to regain her scent somehow. 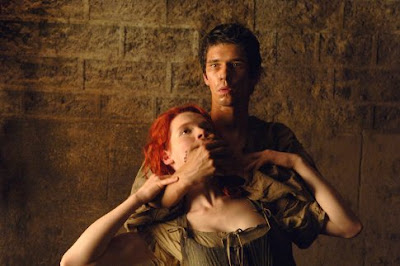 After making a delivery to the perfume shop owned by Baldini, played by Dustin Hoffman, Jean-Baptiste is given a job because of his amazing ability to identify and create smells. He revitalizes Baldini's business by helping him create new formulas and asked in return the secret of preserving scents from objects. Baldini explains that perfumes are harmonies made up of 12 scents or notes and a possible 13th note. Jean-Baptiste must learn a different method of distillation for the scents he wants to capture though. He finds out that he can learn the method in Grasse and sets off on a quest with a little detour. 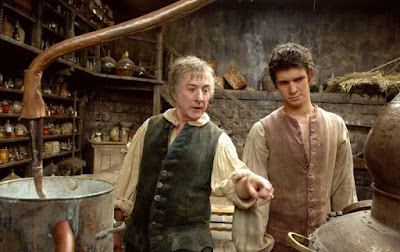 In Grasse Jean-Baptiste learns the scent preserving process called enfleurage from Madame Arnulfi. He meets a wealthy man named Antoine Richis, played by Alan Rickman, and his red haired daughter, Laura Richis. He decides Laura will be the 13th note in his perfume as she reminds him of the red haired girl he had killed. He embarks on a killing spree to gather 12 female bodies for his perfume. There pretty graphic images of the process he uses to contain their body scents. The city goes into panic when they start finding the naked corpses dumped around the city.

Antoine and his daughter flee the city for fear she may be the next victim. Like a basset hound, Jean-Baptiste tracks her down with his ubernose and stakes out by the inn they are staying in. He sneaks in late at night and kills her. He manages to finish making his "13 dead bodies perfume" before the cops bust him. This puts us back to where the movie started with Jean-Baptiste on trial for all these grisly murders all over the city.

He manages to sneak his perfume bottle into the execution. Before being laid on the wooden cross with his face turned towards heaven, he slips the bottle out and opens it. The initial scent causes the jailors to back away from him long enough to dump the bottle on his head. What happened next was totally worth the buildup. The entire  city who had gathered for his execution is thrown into pure ecstasy. They start to go completely mad and stripping their clothes off and engaging in the biggest damn orgy I have ever seen. That must have been a hell of a time filming. If you haven't figured it out yet, you need to watch this movie! 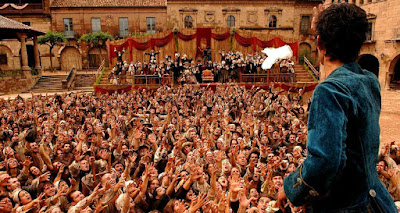 The cinematography is absolutely exquisite and even though some of the scenes are dark, the colors are still popping. The acting from everyone in the film is on point. The set design and costuming are tiptop. I can't find anything to complain about. They managed to make a serial killer movie with a minimal amount of violence and maximum amount of art. I've read some negative reviews on this film and I just don't get it. Perhaps they were expecting something different than they got, as in the case of The VVitch. 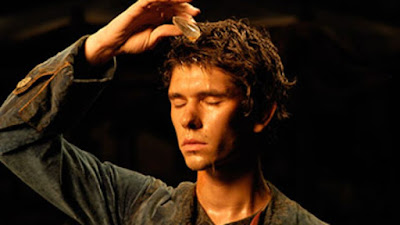 The official IMDB rating for this gem is 7.5, which I will raise to 9 without hesitation. Truly a great cinematic feat that deserves to be viewed by all. No other film that I can think of gets to your nose through your eyes like this one does. The story itself was actually the inspiration for Nirvana's "Scentless Apprentice". Little known fact for you Nirvana fans out there.

There's still plenty more films to cover and I am sure to bring up something odd, disturbing, or obscure in the next installment of Devlin's Domain.


About Me: I have a couple of different aliases, but for this column I will use my middle name. I am Devlin and I currently reside in Atlanta, GA. 33 years of age and still feeling immortal. Former Rockstar, current Pro Wrestler and hell, I'm still a Rockstar at heart. I got my first taste of obscure cinema when I was about 8 years old. My Dad would take us to the video store every weekend to stock up on classic horror films to watch on his projector. They were mostly harmless, PG-rated horror films like the great Universal monster movies. Then one night he rented a movie for himself to watch after we had gone to bed. I was so intrigued by this film that I wasn't allowed to see. I begged and begged and he eventually caved. That night I was exposed to a film unlike anything I had seen before. Ever since that night I wanted to find more films that gave me that same sensation. I wanted to feel shock and disgust. I found my place in the Horror aisle. The film I watched was Faces of Death. Thanks Dad.www.facebook.com/DevlinValek