Another Night with Netflix - Animal 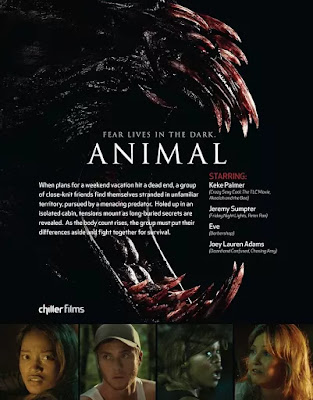 I have to say that I have a love/hate relationship with Netflix. I love being able to binge watch a show anytime I want, and tear through a whole season of something in just a few days. I hate it because after watching all of the things that I really wanted to see I find myself watching something like Animal just because it's there. Sure there are a bunch of shows on my list, but there are plenty of times where I have 90 minutes to kill. I'm a binger, and sometimes I need something I can easily finish in a night.

But I liked Feast a lot, and the monster on the cover looked a hell of a lot like the monster from Feast. If you don't know it or haven't seen it Feast was a creature feature from 2005. It was produced by Wes Craven, Ben Affleck, and Matt Damon. It starred pretty much no one, but Balthazar Getty and Henry Rollins were in it. And if I can diverge for a second, I honestly thought that Balthazar Getty was dead. Or is it Edward Furlong that I thought was dead? I'm seriously confused now since they're both alive. It also had Jason Mewes (of nothing besides this and Kevin Smith movies) dying horribly so that was good too. It was gross, and funny, and unexpected. The sequels were shit, but that shouldn't come as a surprise to anyone. So yes, I watched a movie that came out in 2014 based on nothing other than the fact that it looked kind of similar to a movie that I enjoyed in 2005. That, and the well established fact that I'll watch almost any horror movie at all. This has led me to some truly great movies, and it has also led to watching some truly awful trash. 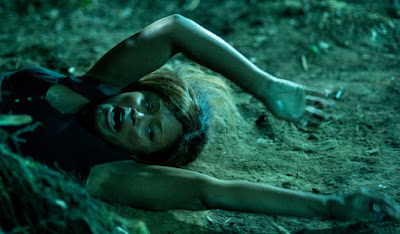 While Animal isn't awful trash it's certainly not good. It's not original, not terribly fun, or even remotely scary. I had no idea what to think when the first two minutes were credits over a black screen, but after that we almost immediately get rapper Eve get ripped apart. You can see how I was already torn. Maybe I'm a snob, but I like a little "gotcha" before the credits start. Or even better is credits running across the opening action. I've seen so many horror movies that I expect something to pull me pretty much right away. So after that Joey Lauren Adams (also of pretty much nothing besides Kevin Smith movies), her husband, and the guy who was Eve's husband run to a cabin to hide from this monster who may or may not have been created by the government. I guess it doesn't matter, but if you're going to go serious you should probably explain where the monster comes from a bit better. Maybe they weren't trying to go serious, but then that's another sticking point. I can't tell if they were going for silly or not with this movie. There were definitely parts that were goofy, but it's not clear if that was intentional or not. I need to know where I stand with a movie, that's all.

Moving along we next get a bunch of teens tromping out into the woods for a hike. If teens stopped going to the woods I think the horror industry would just break down completely. I hear that a few of them are teen stars of some kind, but I'm too old to know or care who they are. Aside from the over the top gay friend they're all pretty bland. None of them have a right to live through this, and either of the two main girls could have easily been "the last girl" without changing anything important to the plot. Although it might have made a nice change for the sassy gay friend had been the final girl. Unfortunately they made him so sissy that not only could he not be a final girl, but you kind of have to wonder why he's out there hiking with the rest of the cast anyway. I'm absolutely not saying gay men can't hike, but this particular caricature of a gay man would not be hiking in the woods. Anyway, the kids start getting chased around by this monster, and find their way to the cabin in the woods where our earlier survivors are hiding. And here again it gets a lot like Feast as they have to overcome personality differences and survival instincts to try and work together to survive. People argue, turn on each other, and get picked off one by one. Not that Feast is the only movie to ever use this trope. I'm well aware of how often this has been used in movies of every genre, but since Animal has so much resemblance to Feast that's what it reminded me of in this instance.

Eventually almost everyone dies, someone (possibly) gets away, and everything turns out pretty much how you think it would. It was clearly left open for a sequel, but they probably would have done that by now if they were going to. I will say that the production value was good, the creature was well done, and the score was decent. Like I said - it wasn't the worst thing I've ever seen, but it was very very very far from the best. It was better than Feast 2 though that's not saying much. So if you liked Feast and wanted more than Feast 2 had so offer then I recommend Animal. It doesn't have the death of Jason Mewes or Henry Rollins in pink sweatpants, but it does have Joey Lauren Adams getting killed so that's something at least. It really doesn't take much to make me happy sometimes. I'm not sure if that's a good thing or a bad thing, but it's a thing so it'll have to do until the next time I'm out of stuff to watch.