What's Next for The Walking Dead? 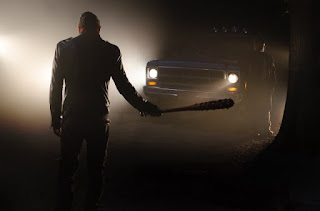 I know that hating The Walking Dead is the cool thing now. Phantom has been hating it for a while so he's ahead of the curve. What a trendsetter! I don't hate The Walking Dead. I've put a lot of time into this show, and I really want it to be good. After two 90 minute episodes in a row that gave us probably a total of 60 minutes of decent content though...well I'm not mad, I'm just disappointed. 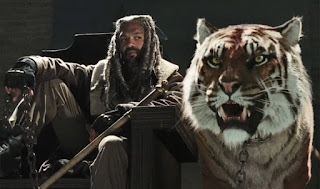 Do you remember the excitement when the show was first announced? I was reading the comic at the time, and remember thinking that it would be a good movie. The idea of it being a TV show never occurred to me because it just didn't seem like anyone would ever make a TV show about zombies. Maybe you weren't as excited as I was, but oh how times have changed. We've been through so much, and I just feel like the show owes the people who've stuck with it a little bit more by now. I'd say the season started off well, but that would be a lie. We waited too long for deaths that weren't surprising. We all knew Glenn was going to die, but I guess Abraham was meant to throw us off. After that supposed trauma we've had seven more episodes, and nothing else has really happened. Negan has gone from being a great new bad guy to being an obnoxious ham, and Rick has had two more personality switches. Is the entire show going to be about Rick switching between pussy and bad-ass? 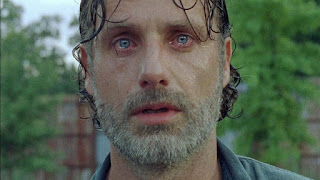 So after the horror of people being beaten to death in a really gruesome way we get Rick doing that crying stunned face that he's perfected over the years (I've included several examples since someone I work with tried to tell me that the crying face wasn't as bad as I was making it out to be), and Daryl being captured and turned into a little bitch. I don't care about Dwight or any of the Saviors even a little bit so showing his struggles was boring as shit. Carol has gone off to be alone yet again, and I feel like we haven't seen nearly enough of The Kingdom for us to be at the "let's go get Negan" place we arrived at the other night. The tiger isn't the best CGI ever, but it's a fucking tiger. It should be ripping up zombies and Saviors right and left. 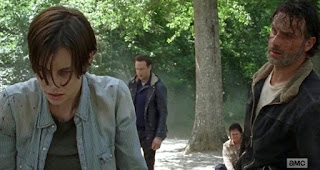 When everyone started gearing up to go off individually and try to get Negan I assumed something was going to happen soon, but everyones' revenge plans just sort of fell apart. Rosita has been killing zombies for years, but can't hit a man 2 feet in front of her. Michonne knew that they were outnumbered, but wussed out for a reason that was only briefly touched on and not explained to my satisfaction. Daryl just snuck out of the Savior compound without taking anyone out along the way. Coral was so close to being the bad-ass this season needed, but for some reason having his gross eye-hole exposed took away his balls. The first half of this season dragged out for so long that it seems odd to have tried to cram all of the real story into the mid-season finale. Oh, and capping it off with the death of someone that was actively trying to bring Rick down and the whiny fat lady that no one cared about was a huge disappointment. And honestly, trading Daryl for Eugene seems like kind of a win for the group. I'll admit that when Negan was holding baby Judith considering killing Rick and Coral and taking over his life Mr. Tibbs and I said "yes, do that right now". We then proceeded to do a "gesture-off" to see whether Rick or Negan had the better exaggerated moves. I did the constant strained neck and shuddering head tilt of Rick while Mr. Tibbs did the shoulder swinging and torso thrusting of Negan. Negan won, and I'm certain we looked like idiots, but I'd also like to see what happened if either actor were forced to work without moving. I don't think they could do it. Anyway, Rick and Coral dying would certainly be exciting, and I would be happy to see Carol get off her ass and take revenge. Something has to get her going again because she's been flipping between two modes as badly as Rick. 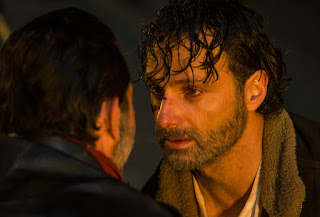 I can only assume that the show runners have something big planned for the back half of the season, but they shouldn't have to. We shouldn't need it because the episodes should be set up to maintain our interest. I'm tired of having to tune in several months later for more of the same. They've had years to learn things like pacing, and the building of suspense. They just seem to have forgotten how to use them. So what needs to happen to get this show back on track, and maybe get old fans involved again?

1. Everyone stop crying all the damn time (especially Rick). Maggie gets a pass for now since she watched the father of her child get his head squished, but everyone else needs to suck some shit up for a change. We're 7 years in to the zombie apocalypse. If you haven't gotten all of the crying out of your system by now you shouldn't even be alive anymore. I would think that after a certain point a sort of comfortable cold numbness would be all that you could feel, and little things like yet another psycho threatening your life and killing a douche who was trying to betray you anyway would kind of just roll right off you.

2. Remember that people have been watching the entire time, and haven't forgotten the first time Carol went away, or Woodbury and Terminus, or those other 5 times Rick went to pieces. Yeah you've been on the air for a long time, but don't insult my intelligence by expecting me to pretend that I haven't seen this before. I used to wonder if Robert Kirkman really meant for the show to end up like this, but then I remembered that he's insanely rich now so probably doesn't care what happens as long as he stays rich. 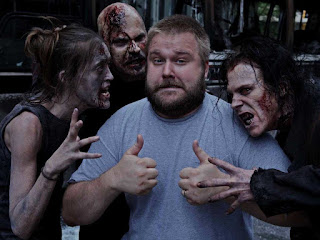 3. Stop splitting up the group into so damn many parts. It's really tough to keep up with who's doing what when we don't see them for several episodes. I forgot Tara was even alive, but then when she showed back up I remembered that I didn't really care. It's only because of the comics that I want to see more of The Kingdom. If it was just based on the show I wouldn't give a shit. One episode in The Kingdom shows the tiger for a few seconds, and then Carol is just hanging out alone eating fruit the next time we see her in their compound.

4. Stop telegraphing everything. We get it; Gregory is a dick, and Maggie is going to end up in charge of Hilltop. I don't need three episodes of build-up to get the point. We also knew that Dwight was going to help Daryl escape so that he can eventually have some sort of redemption. We knew Rick was going to cowboy up, and get the band back together. Carol is going to get back in the game because she always does, and she and Daryl will probably have another tearful reunion. Unless they skip that due to the fact that Rick and Daryl already had their bro-down crying time.

I'm not giving up on The Walking Dead. I'm involved, and invested in the show. I want this show to work, but I need it to give me something in return. At least keep putting more zombies in the show. That scene with Rick and Aaron at the lake full of zombies was cool. Like Tara, you almost forget that they're around sometimes. That's not a good thing for a show based on the zombie apocalypse, and not much else to hold my interest. So I'll tune back in for the rest of the season, but it better be worth it dammit.