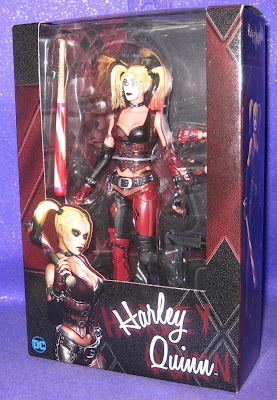 “Over the last few years Harley Quinn has become one of my favorite characters.”

Is a statement that pretty much every comic book nerd in the world would make, except they wouldn’t admit to the “last few years” part. They’d claim she was their favorite from the start.
Don’t get mad at them. It’s not their fault. That sort of thig comes from the toxic environment created by the self-appointed gatekeepers of our pop culture. You almost have to qualify every statement you make about your fandom, lest some hoary hobgoblin emerge from the nerd strata above yours to crush you with their psychopathic, encyclopedic knowledge of the matter at hand, thus proving that your fandom is fraudulent and that they have once again triumphed over a lesser being.

This sort of thing is why I don’t discuss Doctor Who in public anymore.

But I’ll come right out and say that I’ve only really appreciated Harley in the last few years. The combination of the Arkham games (that essentially treated her as the main antagonist), Palmiotti and Conner’s comics, and a sudden glut of nice-looking merchandise combined and swept me up into Harleymania, brother. Whatcha’ gonna do?

So now I’ve got a shelf of Harleys similar to my shelf of Batmans and I buy any Harley Quinn figure that catches my eye. Within reason.

This figure is one of NECA’s Christmas surprises for 2016. The other is a Batman Begins figure in the same scale. I don’t know that they’re necessarily Toys R Us Exclusives, but that’s the only place I know of to get them right now.

When I first saw this figure my first thought was that I already had the DC Collectibles version. This NECA Harley looked like an upgrade, but did I really need the same costume again?

Then I went and looked at that DC (at the time) Direct figure. 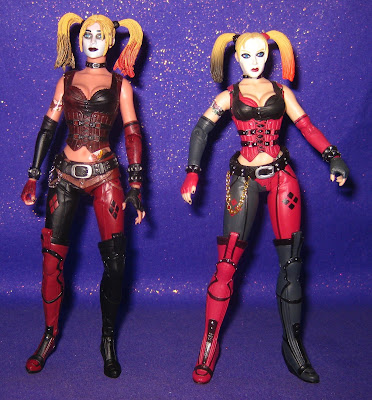 WOW. It’s amazing the difference a few years can make. The DCD Harley is downright primitive. Credit where it’s due, if they made this Harley now it would probably look as good as NECA’s, but it would also cost nine dollars more. 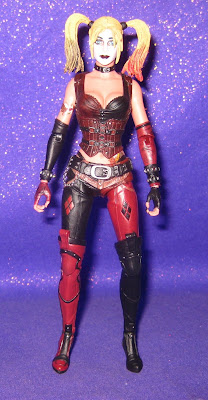 If you do find these in the wild – and you should, barring scalpers; they come in cases of eight – you’re going to want to examine them closely. There were two areas of wild variations on the figures I looked at. The paint on the faces was crazy. The makeup looked vastly different from figure to figure, to the point where one didn’t actually have any white on its nose.

The other problem spot was the belt/pants piece. It’s a soft plastic overlay and it was glued out of position on every figure. I got the one that it was least crooked on. More on that in a bit.

Otherwise, this is a gorgeous figure. The sculpt and paint are wonderful and the proportions are far more realistic than the DCD version. Not to mention the hugely superior articulation.
Which I will mention later. 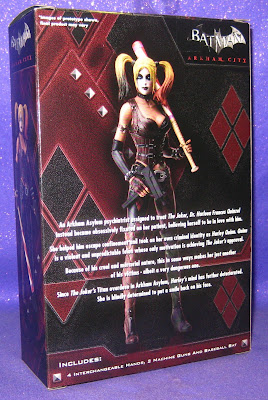 The box is my favorite one of these so far. Rather than just lifting the look of the Arkham games, NECA created a very Harley-centric aesthetic. Her trademark diamonds are all over and the graphics have a leather-like texture to reflect her costume. I like the logo quite a bit, as well. The scrawled letters under the fancy “Harley Quinn” is a nice touch.

The back features a bio – something the DC Direct/Collectibles lines lack – and the bottom of the box has creator credits. My pictures of these turned out unbelievably shitty, so just check it out when you see one. 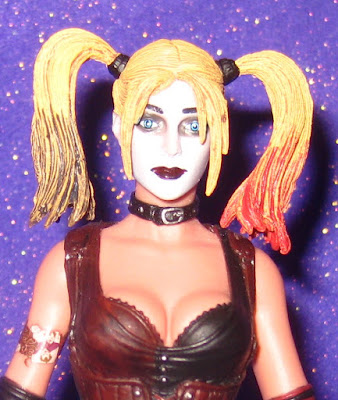 With this version of Harley Quinn the starting point is the hair. Those ponytails have become the signature look for the character, which makes since because they are a nod to her original costume’s headgear. The sculpt here is excellent, with enough fine detail to look right for the scale. The way the ponytails hang looks great and the bangs create a great profile. The paint on the hair ties doesn’t bleed out onto the hair. The hair itself is the right shade of blonde with great blending at the ends of the ponytails.

The face sculpt looks just like Harley from Arkham City. It’s oddly blank, but that’s just how that game was. There was definitely some uncanny valley action going on with her facial expressions and dead eyes. Things got much better by the time Arkham Knight rolled around. The makeup on the figure I selected looks great. The white face paint isn’t as heavy as these pictures make it look. NECA managed to make it look like Harley has greasepaint or maybe even white pan cake on. The lipstick is glossy and placed perfectly. The eye shadow is “smoky” or whatever. Looks good.

The sculpt of the collar has clean, clear details. The buckle and studs are painted precisely with silver. 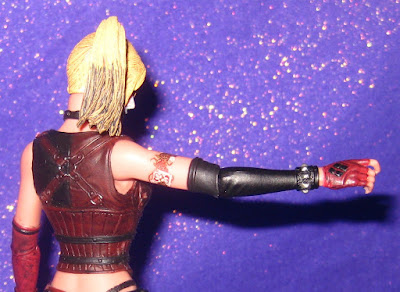 The arms are clad similarly in sleeves, fingerless gloves, and studs. The studded bracelets are nicely detailed with texture and depth. The diamonds on the backs of the gloves are sculpted and not just paint. There’s a lot of fantastic work here – even her fingernails are painted. The armband tattoo on the figure’s right arm is amazing. Not just the intricacy of the design or the multitude of colors used, but the way it is slightly faded into the skin to look more realistic and less like a paint app. 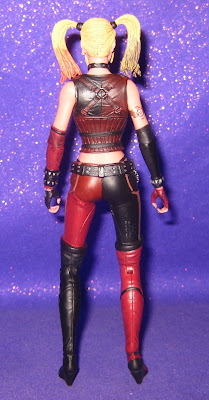 Harley’s corset and top are super busy. Lots of buckles, straps, stitching, and laces. NECA got it all. The depth of detail is impressive. It almost looks like separate layers and pieces. The great paint job helps with this. Each piece is carefully colored and every stud and buckle has a thick coat of silver to stand out. 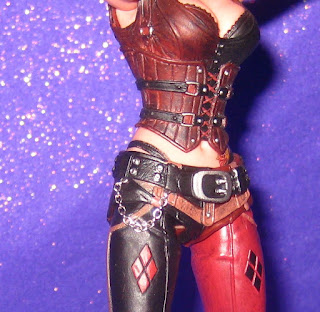 The lower abdominal piece is soft plastic and covers the hip joints. The sculpted layers are impressive. Harley’s oddly dated thongderwear is sticking out of the top (Arkham City was released in 2011 and Lita had switched to more conventional underpants at least six years prior) and this is where you will notice things being slightly off-kilter. The sides of the thong had greatly varying degrees of visibility on the figures I inspected. The one I got was the closest to being level. The skewedness didn’t look like it affected the leg openings too much, just the top of the pants. The chain is an actual chain, and that's great. 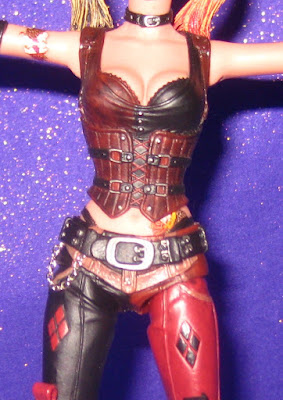 Harley’s hip tattoo looks just as good as the one on her arm. The paint on the crotch piece is excellent compared to what I’ve seen on soft plastic and rubber on other figures. The straps hanging down onto the legs also look oddly better than the same design in other figures. Also, most figures have boring pants. I’ll usually just say, “The pants look fine”. But these pants have seams and sculpted diamonds and an asymmetrical paint job. They look great.
Harley’s boots are every goth girl’s dream. They’ve got thick platforms (rather than heels, which is great), lots of seams and trim, and studs. 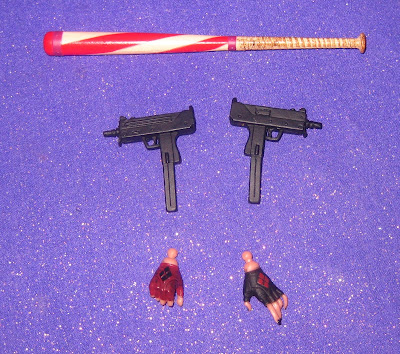 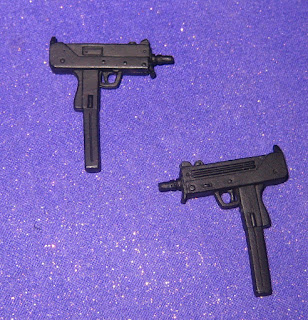 The pistols are your classic Uzi-looking guns. They seem a bit large, but whatever. The sculpts are oddly soft. I feel like the edges should be a little harder and that maybe these would look better glossy. They’re not bad, they just seem off to me compared to what the figure looks like.

The bat is just a nicely sculpted baseball bat with a great paint job. It’s great. 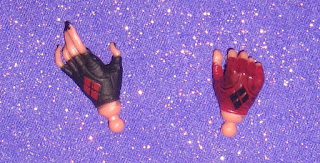 The extra hands are posed to hold the bat. They look great and switch out easily. The pegs are sturdy and short, so you don’t have to worry about breaking them. 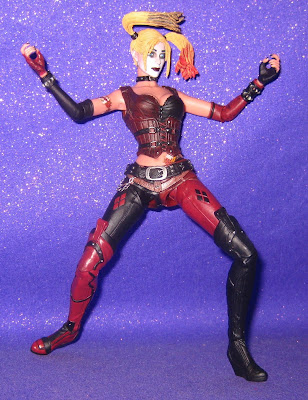 NECA’s Harley has already owned DCD’s with looks alone, but there are a good number of useful articulation upgrades, as well.

Since this is a new and different figure, here are the points of articulation:

On the one hand I really wish NECA would develop some better ankle articulation. On the other hand, this figure is more poseable than ninety percent of the DC Direct/Collectibles figures I own and their Arkham City Harley doesn’t even have ankle joints. The minimal movement of this figure’s is a step up.

Everything else works great. Her head has an excellent range of movement that is not impeded by the dangling ponytails because they are on swivels! I love that.

The elbows could bend a bit deeper, but they’re okay. For the most part the arms are very good. The torso joint is the one I’m really impressed by. You have to carefully loosen it up, but once you do it becomes a really dynamic point of articulation.

The hips and knees are good. You can do as much with them as the relatively static ankles will allow. To the naked eye the crotch piece does a very good job of covering the hip joints, which are pretty good. 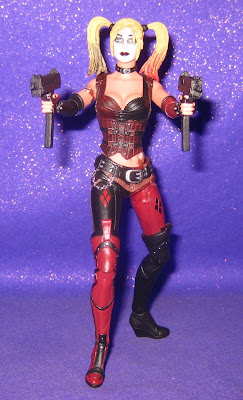 Between the fancy new joints and the accessories, this is one of those figures that's probably going to linger on my desk for a while. Next to Batman. 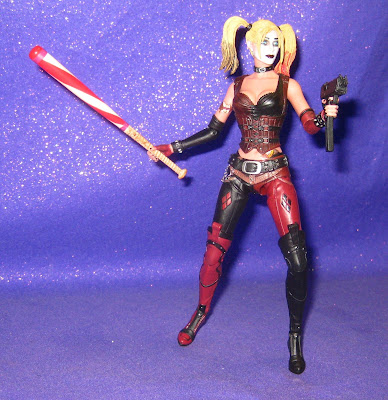 Ankles aside, this is a great Harley Quinn. If you can get one with good makeup like mine, you’ll be happy to have it.
4 out of 5

If you enjoy toys, toy collecting, or Needless Things, you might enjoy SupportPhantom.com.
Posted by Phantom Troublemaker at 11:00:00 AM