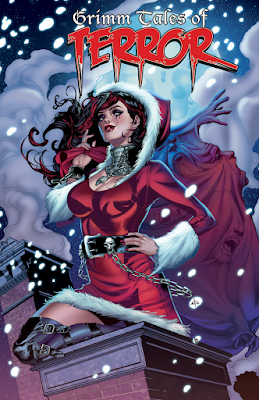 In this Comic Book Wednesday I’m taking a look at the Grimm Tales of Terror 2016 Holiday Special. It’s available today at your Local Comic Book Shop!

Merry Christmas and happy holidays – it’s time to return to Zenescope’s Grimm world for four tales of Yuletide terror (and one wraparound story)! Each of the stories represents a different aspect of the holiday season; ones that we’re a familiar with. There’s a mall Santa, the office Christmas party, the temptation of peeking at gifts, and caroling. What could possibly go wrong with Christmas carolers? 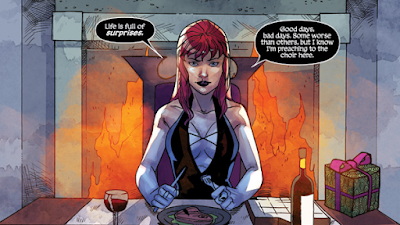 This is the story that ties the rest of the shorts together. It’s not so much a story as it is the narrator addressing the audience and laying out themes that lead into each tale. Sometimes the writer strains a bit to make this happen, but it all works in a Tales from the Crypt kind of way.

The narrator is the common element from the Grimm Tales of Terror series. She’s like the Cryptkeeper, only not dried up and gross.

The art is solid, with the colors being particularly nice, but the cinematic look of the panels is what I liked most. I could really visualize these camera angles moving around in a live action setting. The progressions of the characters actions as she’s talking make sense, too. Very often artists don’t worry about telling a visual story as much as they do making splashy panels. Each panel leads into the next here while providing cues as to what action is taking place and why we’re seeing it.

After the two opening pages, each of the interstitial sequences only takes up a page and gets a brief story across until the big finale of this piece, which is, indeed a finale. 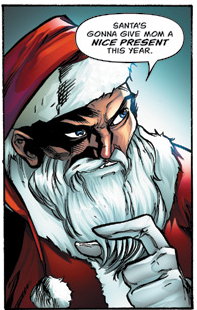 If they’re not absolutely perfect – real hair and beard, high-quality tailored suit, rosy cheeks – mall Santas can be pretty creepy. Zenescope knows that and is using it to make your skin crawl.

Some of the panels lack any kind of background, but I think it’s mostly because of the economy of space, here. When you are telling a story that requires as much information as this one does in eight pages, you have to make things tight. Lots of narrow panels.

Otherwise the art is solid and consistent. Characters’ facial expressions are good and they’re recognizable from page to page. The look is a little cartoony, but that allows for a lot more dynamism throughout the story.

The twist is visible from a mile away, but it’s satisfying.

This one is about an office Christmas party where the characters refer to the gift exchange as a “Pollyanna”, which I have never heard before and had to look up to discover it is a regional term from Southeastern Pennsylvania and South Jersey. On the one hand I don’t know how wise it is to use a colloquialism with such a small base in your internationally published comic book. On the other hand, I suppose if these are Jersey girls, that’s what they’d say.

The story plays out more like a traditional Tales/Vault-type narrative. As a matter of fact, I think this one would work much better as a half-hour TV episode. Once again, there’s a lot to get across in eight pages. Pollyanna would have benefitted from more backstory and character interaction. You have to make some jumps to get the point of what’s going on.

The art reminds me a lot of the EC stuff. If the colors weren’t as glaringly modern, I could see this fitting in with some classic horror stuff. I also like the 80s setting, though it isn’t utilized for much more than a mention.

Remember that last day of school before Winter Break? The excitement of the impending vacation mixed with the dread of one more day spent in the hell that is the public education system?

Kevin isn’t interested in doing all of that. He manages to convince his parents he’s sick and start that Christmas vacation a day early so that he can search the house for presents.
The story itself is good, but feels truncated like the others. I realize these shorts aren’t necessarily intended to be character pieces, but I found myself wanting to know a little more about these people in order to fully appreciate their situations. The end of this one falls a little flat because as the readers we don’t really have an idea of how the outcome affects the family.

But the biggest problem with this one is Kevin’s age. His parents say that he is twelve, but in several panels he is drawn looking about the size of a five-year-old. There are some serious anatomical issues going on. In other panels without Kevin’s parents around for reference his proportions look entirely different.

Due to the lack of perspective on the family and the weird proportion issues with Kevin this was my least favorite of the stories. It’s strange, too, because otherwise the art is good. 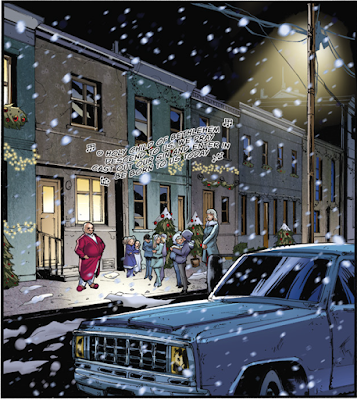 The final story involves Christmas caroling and an old grump. It’s a little more atmospheric and creepy than the others. The art is solid and the story has a nice tension to it. If you’ve read these kinds of horror comics before or watched Tales from the Crypt or Darkside you know where this is going. But it’s still a good and satisfying read and the art is great. I love the lurid colors towards the end.


All in all, the Grimm Tales of Terror 2016 Holiday Special is a gruesome, fun read for the holidays. If you can grab a copy at your Local Comic Shop you should.

If you enjoy comic books, Christmas, or Needless Things, you might enjoy SupportPhantom.com.
Posted by Phantom Troublemaker at 11:00:00 AM