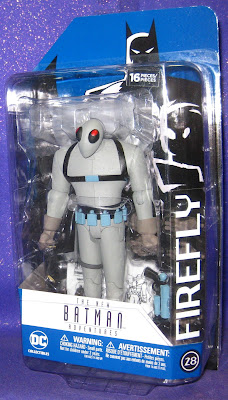 Firefly is a character that I honestly don't even remember being used in The Animated Series or The New Batman Adventures all that much. I like his design but I could swear he wasn't on more than one episode. But he's cool and he has a history from the comic books and is definitely more badass than Killer Moth.

I don't have any attachment to him as a villain because honestly I just haven't seen a lot of the guy. He recently reappeared in All*Star Batman and I like the redesign from that, but maybe that's because I don't have much attachment to him. It's not like I have expectations.

As this line goes on I get more excited about non-Batman related characters, but there are still quite a few residents of Gotham City that I'll be happy to see and oddly enough Firefly was one of them. He has a cool design and the fact that he was featured in the Arkham games makes me like him more as a character. I wouldn't call him essential but just looking at this figure makes me glad I got it. He's another one of those that once I had him in hand I remembered why I like this line so much. The design is simply fantastic for this format. 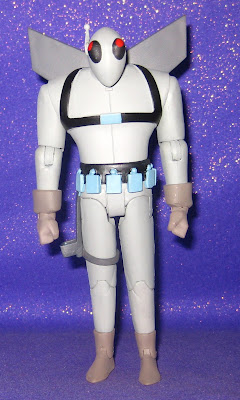 He's sleek and big I'm surprised at his proportions - he's larger than I thought he would be and he has big, creepy hands. His head is also creepy. It's very Mothman-esque, which is fine and appropriate. His little tiny wings are making me laugh. 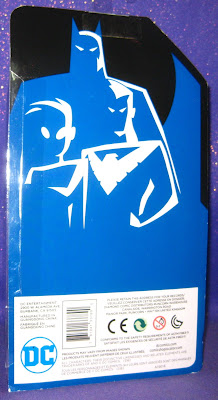 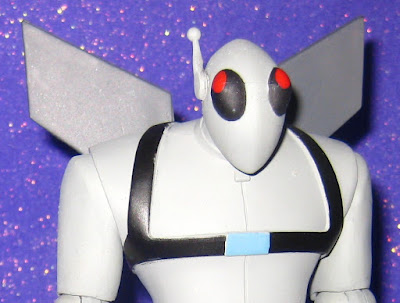 Firefly's helmet is really cool and specifically moth-like. The eys sport a really solid paint job - the black is flat and well-placed. The red highlights are a little odd because he looks like he's kind of looking up, but it's okay because it does give him this alien look. The figure actually comes across as creepier than I remember him being on the show. That's probably due to it looking so alien and as you know, I do not like aliens. The antenna on the side of his helmet is distinct and has a nice sculpt. 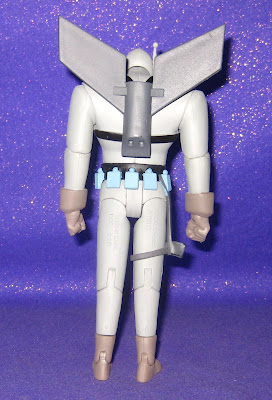 His torso is thick. I don't know if off the top of my head I would have thought of Firefly as being this large, but it's kind of cool. It gives the figure more presence and more distinctness among a lot of sleek, slender characters. The straps holding his jetpack on are a raised sculpt and the paint on them looks good. This figure just has a really appealing and distinct profile. I dig it. 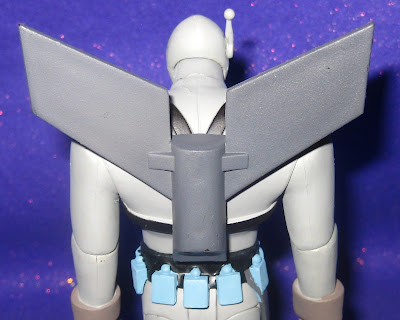 Firefly's jetpack is basically a little canister with a couple of flat wing things on it. I realize in my head I'm thinking of Killer Moth's wings, but I feel like Firefly's wings should be larger.

Obviously I am wrong.

There is a hole in the bottom of the jet pack that makes it look like there should be a flame effect, but there isn't one. The belt is a separate rubber piece that is attached to the holster. It looks great and all of the fuel canisters or whatever those are are distinct and the paint is applied well. 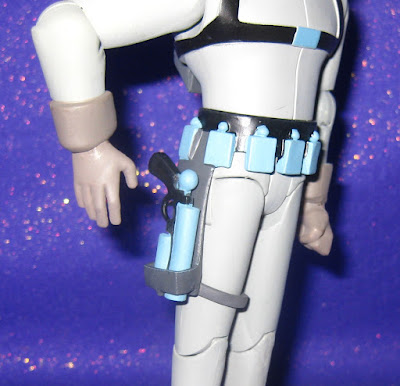 The gun fits nicely into the holster and sits much better than I thought it would. 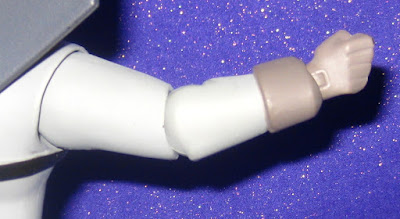 Fireflies gloved hands look good. They're thick and I like the cuffs of the gloves and how distinct they are in the sculpt. 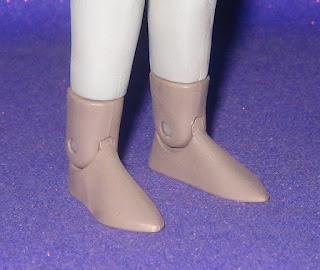 The boots are just these little booties. Not much to say about them. I appreciate that they are sculpted to look like boots and aren't just a paint job. By which I mean the top of the boot is separate from the leg of the figure. Otherwise they're just straight-up plain matte plastic, which is just fine. 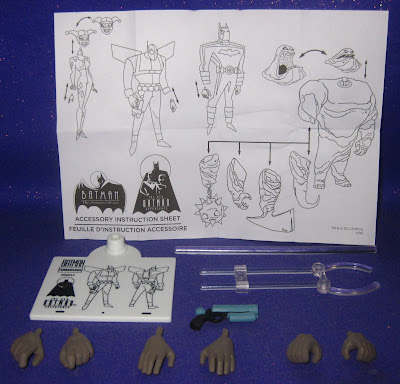 Firefly comes with six extra hands, his flame gun, and a stand. 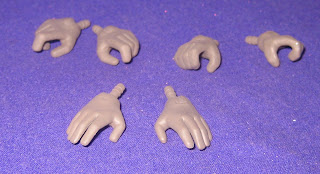 The hands all look great. I'm going to comment once again on how large they are because it just seems weird. Compared to the tiny hands of the other figures in the line he's like some kind of giant handed freak. These switch out easily and are posed to grasp or just be neutral. There's one pair that I can't quite figure out because they don't seem specific to any of the accessories - by which I mean the flame gun, the only accessory – but are these random open hands. But better too many than not enough. 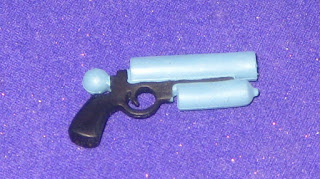 The flame gun is cool but I don't quite understand where the fuel supply fits into it. This is accurate to the character design, you just don't think about it as much watching a cartoon as you do when there's a 3D thing in your hand. I guess maybe those cartridges on his belt just plug into the gun. That's not visually apparent, but maybe that's what's up. Whatever the case, it fits nicely into his hand and has a solid bit of paint on it. 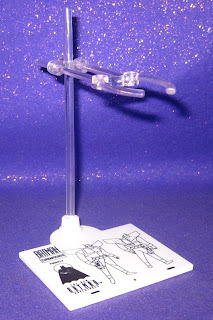 The stand is the big, clunky thing that I’ve come to resent but also realize that there’s no way around using them. After taking all of my figures off of the stands, I’m now going to have to dig back into storage and pull them all out. I still wish they were black instead of white. 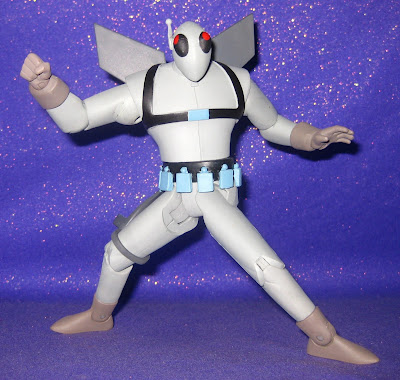 Fireflies joints all work fairly well. As I've mentioned he's kind of a bulky figure for this line, but his shoulders, elbows, and wrists work better than you might expect them to considering how thick they are. He has the ugly hips that all of these figures have, but what are you gonna do?

I'm definitely disappointed in his head articulation. It just swivels around - there's no up and down or side-to-side movement at all. It very much limits the types of poses you can get out of the figure. Any character that flies should at least have the ability to look up and down. After Killer Croc's strange head, I don't see why they couldn't have done a better job with Firefly. 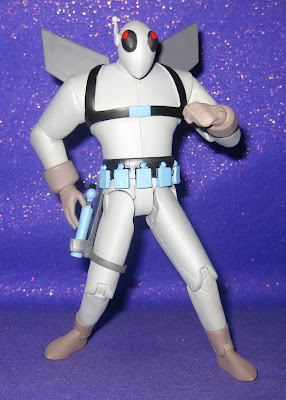 I'm a little surprised at the lack of accessories on this one. Obviously he had to come with the gun, but I feel like he should have come with some flame effects. That's not something that has been done in this line, but both the gun and the jetpack have hollow portions that look like a flame effect should fit into them. Considering the amount of accessories that other figures in this line of come with I feel like Firefly could have used a couple more. Flame effects are really the only thing that would have made sense.

As is this figure looks good but I can't say he's a whole lot of fun. 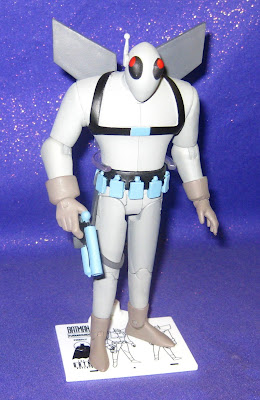 Despite the flaws that I see I do like this figure. Firefly has a great profile and he stands out from the rest of the line. I'm happy that he'll be on my shelf. He's not exactly a whole lot of fun, but I have to admit that this line for the most part is more about aesthetics, despite how much articulation DC collectibles crams into each figure.

Firefly is not a must-have. He's cool and I like his look but you could probably safely pass on him and still be happy with your DC animated collection.

If you enjoy toys, toy collecting, or Needless Things, you might enjoy SupportPhantom.com.
Posted by Phantom Troublemaker at 11:00:00 AM