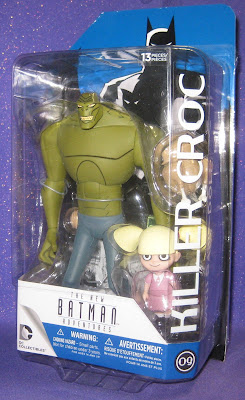 I have a love/not-totally-satisfied with relationship with DC Collectibles’ animated line.

You guys already know I hate the hip joints on these. That’s on record. At first I was okay with the huge stands because they seemed classy and had the neat-o character references on the bottom (though I thought they should be black plastic, not white), but now that I’ve got a few shelves full of figures they just take up too much space. I boxed up all the stands to make space and now I have a handful of figures that just won’t stand up. The joints are looser now than when I reviewed them and of course there’s also the domino effect to consider. So every time I go in the room they’re in there are at least a couple of figures knocked over. Phantasm, Creeper, and Nightwing are the worst. Poison Ivy won’t even stand without aid, so she’s sitting on the Batmobile.

Don’t get me started on the whole deluxe Batmobile thing.

But I do love the line for what it represents. And every time I get frustrated with it or start to feel like too much time is passing between releases, a new batch of figures hits and gets me excited all over again. Despite the stupid hips.

I’m pretty picky about Killer Croc. In general I don’t care for him being too monstrous, though I do like the Arkham video game version because it fits with that aesthetic. I prefer he be mostly humanoid with some reptilian features, at most stretching what you might see in a freak show. The Suicide Squad version was pretty solid. This animated version is also within the bounds of what I like. In general I tend to prefer the Animated Series looks of these characters, but in this instance the New Adventures is far superior. The original Killer Croc design was too damn weird. 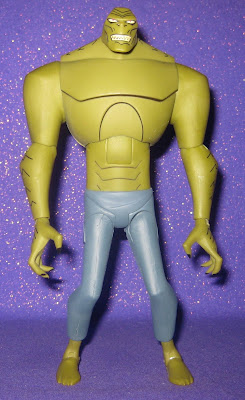 Croc and Baby Doll both look great. Crocs proportions are awesome and the inclusion of Dahl in the box is pure bonus. This is one of those figure sets that got me excited about the line all over again. 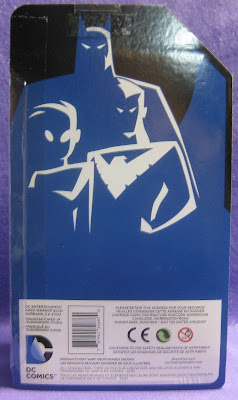 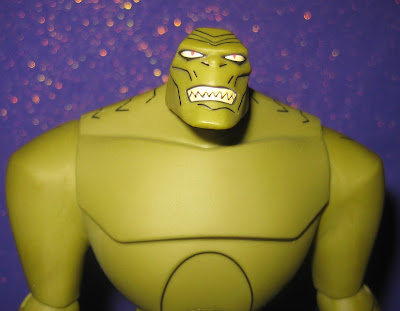 From the front Croc’s head looks great. The designers captured his reptilian look well and chose an appropriate expression for the face. It’s neutral but expresses savagery and intelligence. He doesn’t just look like a monster. The paint is applied nicely and I particularly like the dark apps in the sculpted lines. 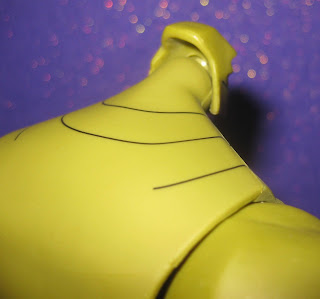 From the back, not so much. I get that they wanted a good range of motion, but it takes something away to see that hollowed-out bowl. I think I’m just going to have to get over things like this as necessary evils of the aesthetics of this line. There are a few instances where the design has been hampered by the needs of a 3D plastic figure. It’s just how it is. 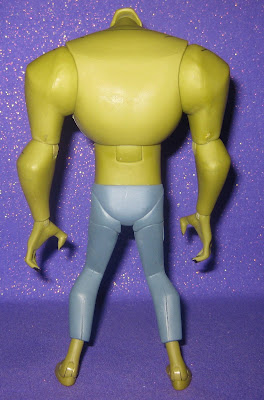 I absolutely love Croc’s profile. The massive upper body and arms on top of the narrow legs looks great and makes this figure stand out on the shelf, not to mention towering over the other figures. The dark lines painted in certain areas create the impression of scales without having actual scales break up the smooth lines that give the animated look. I’m not sure if I’ve mentioned it before, but I also really like the texture and flatness of the plastic DCC uses for these. It works very well for the look. 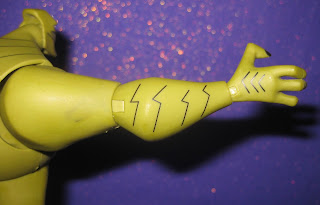 Crocs’ articulation is worked into the design nicely. None of the joints break up the profile. His huge, clawed hands look menacing and have black paint on each of the claws. 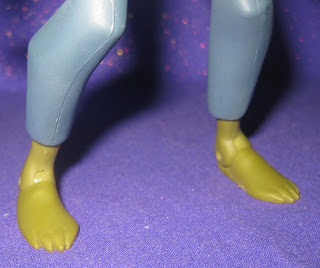 Croc’s feet are big and simple. The toes aren’t very detailed, but look very good and represent the animation well. His trousers are just plain blue. I find it odd that the bottoms aren’t torn up, but that’s how the animated model looked. 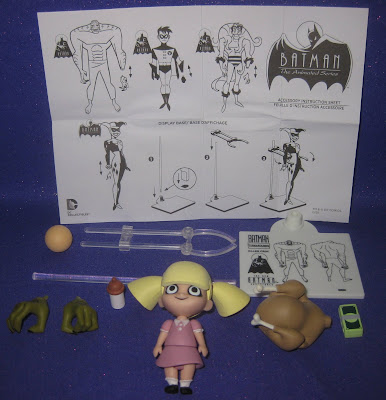 Killer Croc comes with two extra hands, a ball, a turkey, a stack of cash, a bottle, a stand, and Baby Doll. 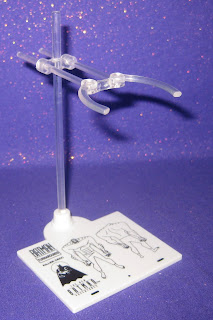 The stand is the same big ol’ stand that the rest of the large figures in this line come with. It takes up a lot of shelf real estate and Croc doesn’t need it. 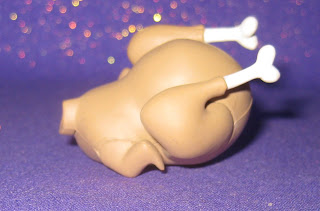 The turkey looks great. It’s a turkey. Someday I’ll learn not to get so close with the camera and wash out all of the color with the stupid flash. I’m like a little kid with a toy gun that thinks you need to run up to someone and stick it in their face to shoot them. 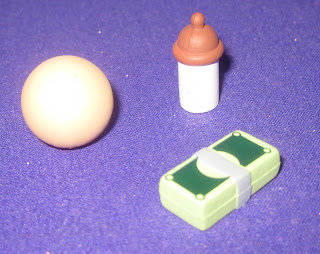 The ball, bottle and cash all look like they should look. I’m impressed with the sculpt of the bottle – that nipple really looks good. I feel like more work went into that nipple than was absolutely necessary. What a nipple. The cash has lots of paint for what is essentially a tertiary accessory. Good stuff. That’s why we’re paying a premium for these figures.

The extra hands are posed to grasp things. They look great and swap out easily. The pegs are big enough that you don’t get nervous switching them like you do some figures in this line. 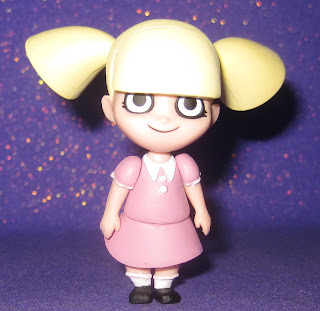 Baby Doll – Mary Louise Dahl – is a solid extra but is actually kind of disappointing if you’re a fan of the character. I’m not saying DCC should have done a single carded Doll, but she can’t hold anything, she can’t sit or stand very well, and this isn’t the face I would have chosen. She’s one of the many truly tragic villains from the show and I think she deserves a little better than this, which is essentially a literal baby doll. The figure looks great and is competently executed with six points of articulation, but it’s just not enough for what I think is a great character.

Side Note: Mary Louise Dahl was created by Paul Dini specifically for Batman: The Animated Series, much like Harley Quinn. Unlike Harley, she has never been used in other media. 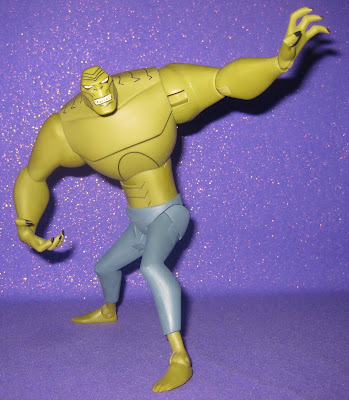 Croc looks like a big stiff but actually has a very good range of motion. His head moves well thanks to the hollow back and his arms can achieve a huge variety of poses thanks to plenty of ball and swivel/pivot joints.

Croc’s abdomen is also nicely done, with a great hinge under a swivel. 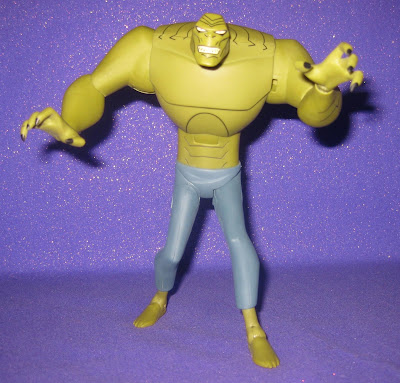 He’s lacking knee joints, but I’m okay with that if the alternative is a figure that wouldn’t be able to stand. The ankles are nice and tight and support the top-heavy design just fine. I was surprised at the number of dynamic poses I was able to achieve.

The accessories are fun and Croc can hold them all. I really do wish Baby Doll was a better figure. An extra shouting head or arms that could be switched out to enable her to hold things would be nice. Heck, they could have just sculpted arms onto the bottle and the ball and I would have been happy. As it is those items really have no purpose since she can’t interact with them. 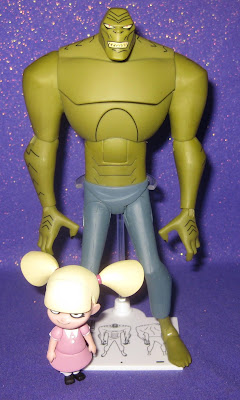 Even though I’m disappointed with Baby Doll, it’s important to remember that she is just a pack-in bonus and that Croc is the feature here. For him and his related accessories alone this figure is worth it. DCC did a great job on this one and I’d rather have a sub-par Baby Doll for free than none at all.