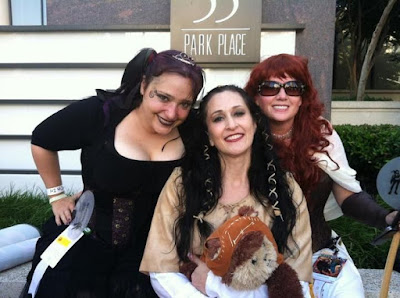 Every vampire story out there is the same.  They get old- no pun intended- and frankly I’m kinda over them.  Evil wants to be good, good girl falls for bad boy, forbidden love ensues followed by lots of kinky sex, etc. etc.  Only difference so far is that one sparkled.  And let’s face it…we all all wanted that one dead.  Fairy tales growing up were much the same for me.  With the exception of the Grimm versions, everything was happy ending and all the Damsels needed saving from distress.  They could have helped themselves in the time it took them to constantly scream for help; why did those brain-dead chicks never realize this?

Every once in a short while, however, someone gives you back the spooky and the beautiful.  You get the romance, sure…but it isn’t the main plot point.  You get the action, the drama, the horror, the gore, and occasionally the immortal walks away with the girl.  Sometimes you get the Fairy Tale with a great dark and Gothic twist.  A retelling or a fresh concept where the Princess doesn’t sit on her petticoats, uses her brain for a change, sacrifices and even suffers losses…and things can go dark very fast before the happy ending comes close if it even does for anyone except the villain.  Or maybe, the villain was the hero of the fable after all.  How cool is that?  A world with no Cullen in sight, I say?  A world where the Princess picks up her own sword in a world of dark and macabre fun, I say?  You want to know more, you say?  Well allow me to elaborate, my friend.  Authors Sherrilyn Kenyon and Alethea Kontis bring these concepts to life in their worlds of the Dark-Hunters and in the adventures of the Woodcutter sisters in the country of Arilland. 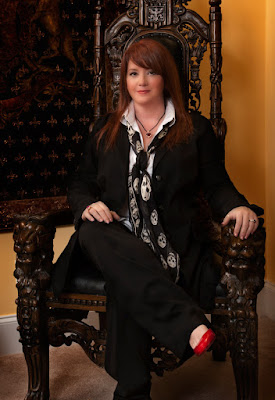 Each country on the planet has different versions of vampires.  Ghost form, mist, human, beast.  Some only from the torso up, some that walk, and some that float.  Some that feed only from pregnant women, some from virgins, and some that are equal opportunity bloodsuckers.  Some even go straight for the soul instead.  Mixing modern day New Orleans setting with Greek mythology and a paranormal oomph gave Sherrilyn Kenyon a series that has spanned over a decade of worth of books and multiple spots on the NYT Bestseller list, solidifying her as one of the most prominent authors of our time.  Still think vampires have been ran into the ground?

Man, I have to lay off the puns…

The backstory:  Apollo, great windbag that he is, decided that it was a great idea to do two things.  A:  create the "perfect" race in his image, and B:  take a human girl as his mistress, who bore his son.  When his mistress and son were slaughtered this didn't sit well with with the Sun God so he cursed his perfect people to age and die over the course of a 24 hour period on their 27th birthday...the age of his mistress when she was murdered.  Now, Apollo's sister was prepared to deal with this little problem.  I won't spoil the how and why of all this; it's way too good to just read the backstory for yourself.  The short version is that the now dying race finds a way to circumvent the curse by sucking the souls of humans to elongate their lives by first sucking the blood from them... kind of like going through the candy of the Tootsie-Pop to get to the chewy center.  This turned them into the vampiric daimons.  Apollo's sister, Artemis, created the Dark-Hunters to combat this newfound problem her brother impulsively created.  Immortal warriors that were once human, they each sold their soul to Artemis upon their death in exchange for vengeance for what caused their untimely demise.  After they get their one day period to exact their revenge they they are in her service as a hunter of these soul-sucking daimons.  They possess the same traits as the daimons; sensitivity to light, fangs, strength and a desire for blood yet not the need for it.  Each is granted a specific psychic ability, or they already have a psychotic one.  Hey...I never said they were all sane.  Some are just crazy, man.  Their job is made clear by their unofficial leader (he prefers the term "wrangler," however,)  Acheron  (Not pronounced like the river...he changed it to have people pronounce is Ash-er-on.  Or just call him Ash; he'll tolerate that too...from some.)  The job is as follows:  Hunt daimons, kill daimons, and don't get dead.  It's that simple.  The only thing is that nothing is ever that simple, is it? 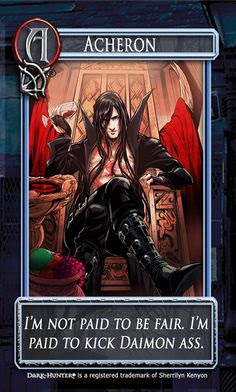 Some authors just give each character a book, focus on them and them alone, and that's all you get.  Not Sherrilyn Kenyon.  Each character has their own book, but they meld into the world they live in and the relationships/lives of the other Dark-Hunters, humans, Gods, and Demons around them.  Like Buffy and Angel, all of the above are a mix of colorful personas; some good, some evil, some so complex with backstories so detailed that they require their own double-sized books just to decipher them, etc.  Sherri's knack for writing emotion and switching character POV's during the story effortlessly help to keep you in everyone's heads and keep the entire party  involved in the events of the other characters while keeping the reader invested in them at the same time.  She makes these character's more than warriors; they are a family.  You can and will become emotionally invested in their lives and staying up late to turn that one extra page (or thirty) won't feel like a chore at all. 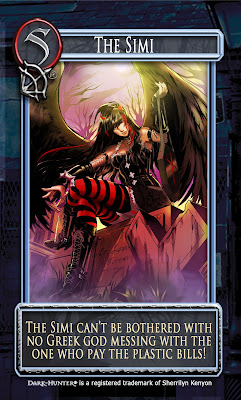 I was never a cutsey-wutsey girl.  I never enjoyed girlish things and this included fairy tales.  When most girls were having tea parties I was playing with G.I. Joe action figures.  You see where I am going with this?  That being said, to find an author who is not only as awesome and approachable/relate-able a  person as  Sherrilyn is, but who can make me enjoy and believe in Fairy Tales again...well, that says something about the power of her skills.  Why should this be in a Halloween article you ask?  What about stories of a psychotic woman who stalks her legendary hero by mail thinking they are in a relationship after he saved her from the Big Bad Wolf?  What about the Demon that accompanies the white as snow princess on her journey, complete with the killing a unicorn?  What about the magical sister that kisses a frog who turns into a prince, but only before her Gothic poet sister helps them destroy an evil enchantress?  I think that qualifies.  Like the author herself says, she writes dark. 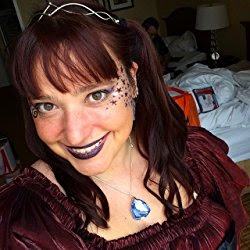 Alethea Kontis is the royalty of modern day fairy tales.  The Woodcutter series, Tales of Arilland, Trix, and even her may children's books, have earned her spots on the NYT Bestseller list and and USA Today.  She even co-wrote a Dark-Hunter book with Sherrilyn Kenyon.  And these award spots were well earned.  The stories are far from Disney-esque.  The world of Arilland is best described from a gamer's perspective as "Open world for readers."  The expansive detail never leaves nothing to be desired and it always lends to new creations for every story.  The Woocutter series in particular starts you on the journey through this realm, telling the story of magical sisters, each named after a day of the week.  And these are far from damsels in distress.  They do their own saving, using the very specific skills they were blessed with along with their intellect and cunning.  Sometimes this leads to the right path and a positive outcome and sometimes it leads to mayhem and many a shifty shenanigans along the way by the family and the people they meet.  But where's the fun in everything always turning out fine?  The book Tales of Arilland continues in this realm, telling the many misadventures of colorful creatures that live in the same country as these sisters, often intertwining with the events of the sister's books. 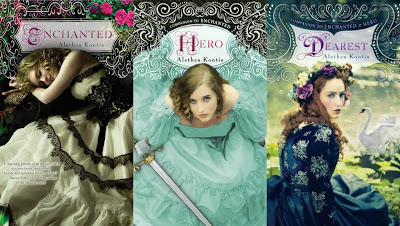 Alethea's stories always know how to blend the detail of the world against the detail of the character's eye.  When what you see is a tree the character will see not only as a tree, but a lengthy story about her father and growing up with him working in those woods, listening to his stories while he chopped down those trees, hearing the sound of his ax hit and even remembering the feel of his calloused hands when they tucked them in.  That's the kind of attention to detail she includes in her work to expand not only her world but the world that the characters live in, and that is what draws you in.  And the fact that these are far from typical fairy tales makes it so exciting.  The dark and twisted way that the happy ever afters come about makes everything more gritty and somehow more realistic....you know...despite the talking frogs and faiiries and multi-headed talking dragons and gigantic flying bees and gothic witches and demons... 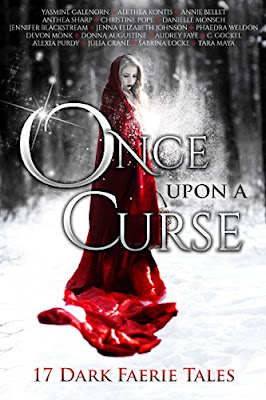 You want some twisted happy ever afters with tough as nails heroines and some action packed horrific beat em' up vampire hunters?  Consider these authors to curl up with during Halloween.  I have included their web sites and social media in this piece, which includes the book order for all of their other works/series.  Alethea has many other stories available, including  book of dark fairy tales.  Sherrilyn Kenyon has various other series including a YA series, a pirate series, a Sci-Fi military series , and even two Government Agency series:  one non-paranormal and one extremely paranormal, complete with green eyed glowing beasts on the payroll. 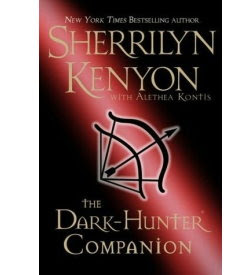 Trust me, you'll be missing out if you pass these authors up for a Halloween night fright.