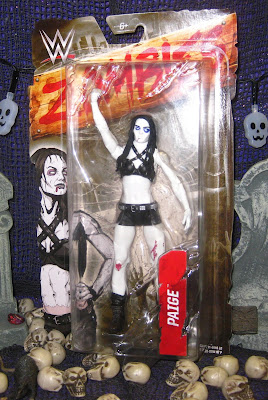 Happy Halloween and welcome to the first spooky toy review of the season on Needless Things!

I both love and hate toy manufacturers for the way that they keep constantly coming up with stuff that hits me in just the right spots.


As I have mentioned here and on the Needless Things Podcast, I dumped most of my wrestling figures and have stopped collecting them regularly. I still love wrestling, but in my never ending quest to cut down on spending (and then turning right around and finding some other thing), plastic half-naked guys had to go.

Then Mattel had to go and show these at Toy Fair. I thought they looked great, but never imagined I’d actually buy them. Actually, I wasn’t even sure they’d make it to market, but more on that in the next one. The bottom line is that out of all of the license that Mattel has, WWE is the one that they seem to not only get right, but go above and beyond sometimes. They have a knack for getting creative and weird with the license, as evidenced by these zombies and by the build-a-figure line.

I saw the full first series of WWE Zombies at Walmart back at the beginning of August, before any rational person would consider calling it the Halloween season and even before Dinosaur Dracula had started the Halloween Countdown. The packaging caught my eye and I went to check them out, as I do with any new toy I see; regardless of whether or not I collect it.

These looked great. The sculpt and paint apps far exceeded my expectations. Of course, so did the price. At thirteen bucks apiece, they also exceeded my budget. At least, as far as buying the whole series of eight figures went. But I could justify four, especially since there were four that caught my eye right off the bat. I’ll talk about the others as I review them, but Paige was a must-have for two reasons – the designers utilized her almost supernaturally pale skin as part of the gimmick and there was only one of her. I figured if I didn’t buy a Paige then, I’d never see one again. And I haven’t. 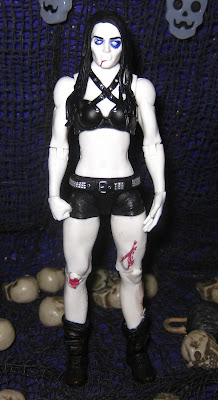 This figure doesn’t glow in the dark, it glows in the light! As I said, they worked Paige’s pale complexion into the figure, which is the sort of cleverness I admire. Rather than coloring her a ghastly green like the rest of the line, they just took her skin tone to the most extreme level of bloodlessness. She stood out not just amongst the Zombies, but in the toy aisle as a whole. 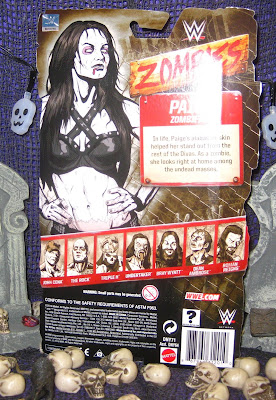 I actually had a tough time deciding to open these. I knew I wanted to review them – part of my rationalization for buying them was that I’d be able to do one a week for 31 Days of Halloween. But the cardbacks looked nice and the blisters are among the best I’ve ever seen.

Each character has a uniquely designed plastic blister, which blows my mind. Paige’s is actually the least interesting. It’s a simple rectangle with some slashes and claw marks. It’s neat, but you’ll understand why it’s not quite as eye-catching as the others. 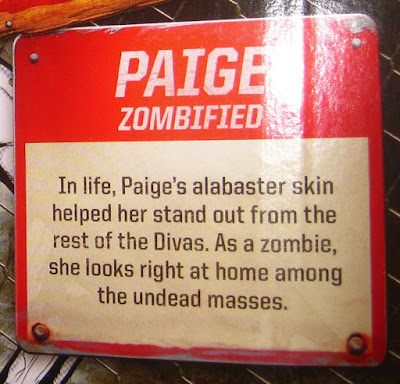 The back of the card features a brief blurb about Paige being undead. Unnecessary and appreciated. It’s little things like this that make me love collecting. 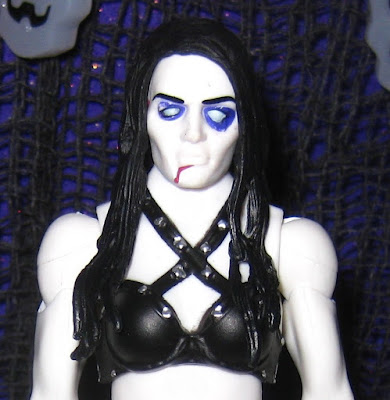 Some of these pictures aren’t the best because the white plastic seems to suck up every Lumen produced by the camera flash and direct it back magnified a thousand times. But you’re not here for pictures, you’re here for words, right?

The head sculpt isn’t a likeness so much as a desiccated Paige face. You look at the figure and can tell from everything else who it is supposed to be, so a likeness wasn’t needed. So they went for gross dead face. The cheeks are sunken and the purple around the eyes is actually sculpt. The hair is a separately sculpted piece of soft plastic. It’s lank and nasty-looking and hangs well. There’s minimal paint on the head, but what’s there is effective and well-placed. Any color you put against this white is going to be vibrant and eye-catching.
My only concern about that brilliant white plastic is how it’s going to age. I don’t want a yellow zombie Paige on my shelf in five years. We’ll see how that goes.

Paige’s gear is accurate. Her shorts and top are a glossy black and the studs are all sculpted and painted silver. There are a few spots of newly-sculpted gore on this figure. The first is on the left leg. The big ol’ chunk taken out of her calf is nasty and has an amazing paint job. There are at least four colors involved in that one wound. There’s also a bit of bloody spatter above that calf wound that adds a little color. Is this the wound that resulted in the former Champions’ ghastly transformation?!? 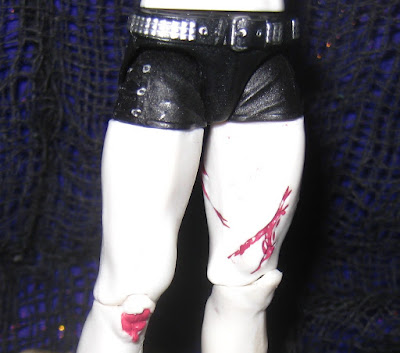 There’s also a small wound on the right knee and a gash on the left thigh. They’re simpler paint jobs than the calf, but just as effective. For some reason the knee bothers me more than anything. That’s just nasty. 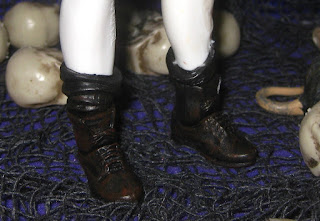 Paige’s boots have a great sculpt, with her socks bunched up at the top and tons of detail on the boots themselves. Not to mention the painted dirt. I love this. Paige is fresh from the grave! 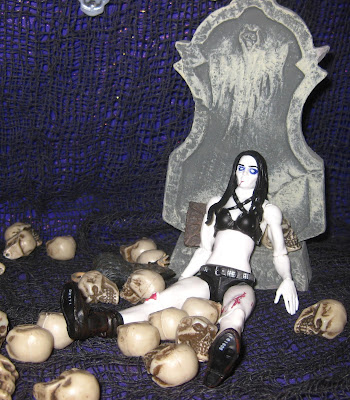 The figure doesn’t come with any accessories, which I’m pretty okay with. I’ll get into that more in the next section.

Sure – Mattel could have thrown in some skulls or something from another line, but this is still essentially a premium figure that Mattel has released at an almost basic price. These could have been twenty bucks apiece.

Mattel has two ranges of standard WWE action figures – Basic and Elite. Elites are super articulated, have detailed paint apps, and cost twenty bucks or more. Basics have much less articulation and paint and cost half as much. I have to say – the ten dollar basic figures are the best deals on the toy market right now. 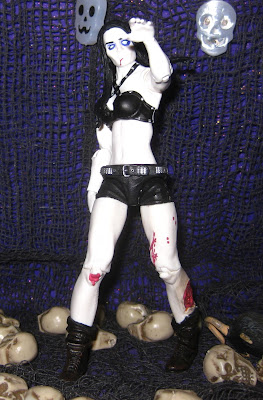 As a cost-saving measure, Mattel will carry accessories from the Elite line to the Basic line when it makes sense. So a Basic figure might actually end up with some fancy HHH kneepads or something only because it costs Mattel less to do it that way.
One of the bigger surprises of Mattel’s thriftiness is that the Basic female figures use the same buck as the Elite female figures, meaning they have the same super articulation. Where Basic males have cut joints at the hips, females have ball joints and swivels on their thighs. Basic females have rockers on their upper abdomens, while males are one solid piece. SO BASIC. 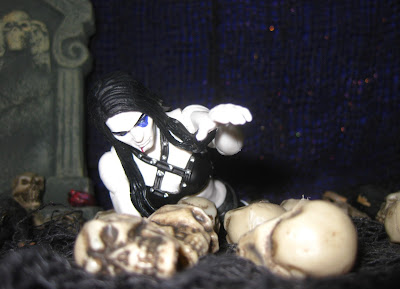 That being the case, this figure has plenty of articulation and is many steps above what you would expect from a 6” figure at this price point. It can achieve plenty of poses and has no trouble standing and maintaining. 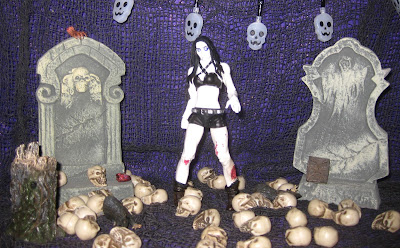 This is a damned fine action figure. I love the WWE Zombies premise, but the execution on Paige goes far above and beyond what I was expecting. This is one of those figures that delights me every time I see it because I can recognize how much effort was put into it and I can practically see the designers’ enthusiasm in every part. If you like wrestling and horror, you have to buy these figures!