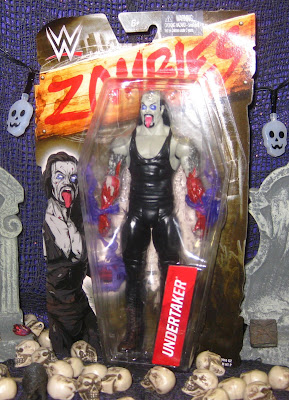 Happy Halloween and welcome to the last spooky toy review of the season on Needless Things!

What better way to wrap up the Halloween toy reviews than with the Deadman, the Phenom, one of the all-time great wrestlers and great gimmicks, The Undertaker?
Even if this figure hadn’t looked both gruesome and awesome, it would have been a must have simply due to the nature of the Undertaker. Somehow, even though kayfabe died after the turn of the century and despite the fact that WWE insists on continuing to expose the business as much as possible, Undertaker has remained the best and only example of the kind of magic that professional wrestling can get away with.


‘Taker’s character has evolved over the years. He’s been everything from an actual mortician to a reanimated corpse to a soulless monster to basically an evil sorcerer (and also a redneck biker, but that isn’t pertinent to the current conversation). Every single time, no matter how outlandish Undertaker’s actions got, the audiences ate it up. He’s been a top guy in WWF/E since his debut twenty-six years ago. And it’s due to hi abilities, his respect for the business, and other’s respect for him.

So anyway, if you’re going to buy just one figure from a line called “WWE Zombies”, it had better be the Deadman. 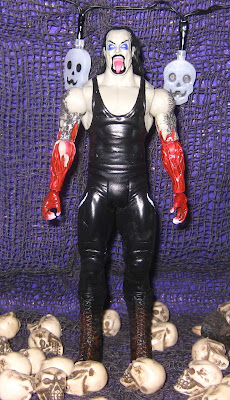 Man, Triple H was pretty gross, but almost cartoony in a way. ‘Taker is downright disturbing. The effect here is that whatever magical energies he’s wielding have burned the very flesh from his arms. At least, that’s what I’m getting out of it. 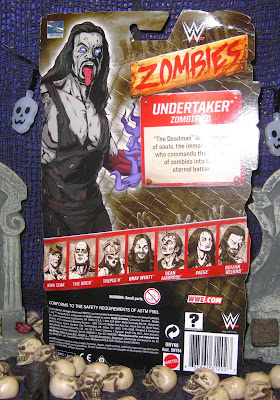 I actually had a tough time deciding to open these. I knew I wanted to review them – part of my rationalization for buying them was that I’d be able to do one a week for 31 Days of Halloween. But the cardbacks looked nice and the blisters are among the best I’ve ever seen.

Each character has a uniquely designed plastic blister, which blows my mind. Undertaker’s is a casket, naturally. Or is that “supernaturally”? 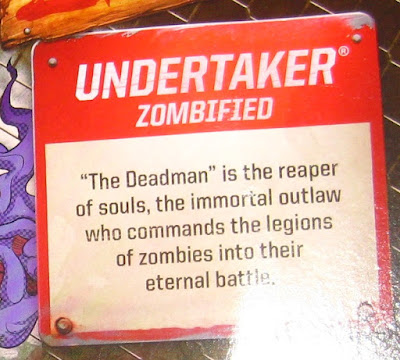 The back of the card features a brief blurb about Undertaker commanding legions of zombies.

In typical wrestling fashion, both Triple H and Undertaker have been proclaimed to be the rulers of the undead. Each guy has to feel like he’s the Big Dog. But here’s my question – who is actually the king of the zombies here? I’ve never seen biographies within the same toy line contradict each other in this way.

Although now that I think about it, Triple H is the ruler and ‘Taker commands the undead in battle. So he’s sort of like a general and Triple H is the king. Which makes sense, even from a real world point of view. 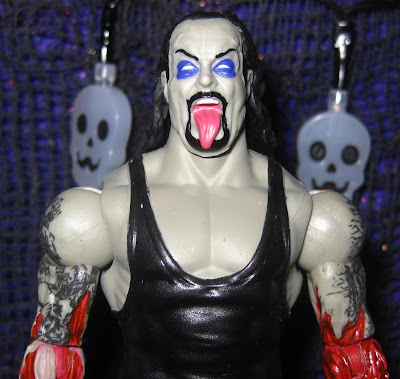 I like that the skin tones vary between figures but that some share common features, like the purple around the eyes. This head sculpt could almost be a regular Undertaker, but those purple areas are actually sculpted and not just painted on. Normally I don’t like such specific facial expressions, but in this instance it’s welcome. If you’re going to do a gruesome Zombie Undertaker, he might as well be sticking that tongue out.

The likeness is great and the hair piece is a great sculpt. I’m glad they went with the long hair, because I just can’t get used to ‘Taker with the shorter look. The hair is a separate piece of softer plastic, so it doesn’t interfere with posing too much. 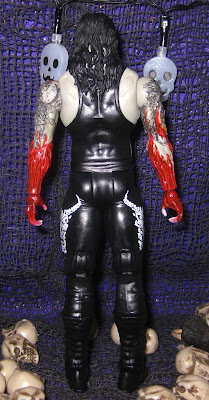 Undertaker’s gear is just the basic tights and singlet that he was wearing a few years ago. The demon skulls painted on the legs are just white, but look good. I feel like his torso is too skinny, but that’s been an issue with ‘Taker figures going all the way back to the JAKKS Pacific lines. 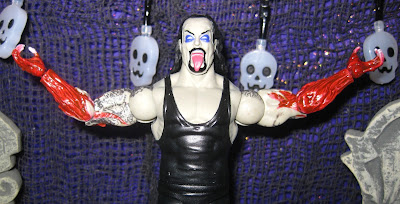 The arms are where the money is in this figure. They look like something straight out of Hellraiser. The sculpted exposed musculature looks incredible. I can’t believe all of the detail here. I’m not saying it’s anatomically accurate or anything because I’ve never seen someone with the arm skin ripped off, but it looks great. The glossy red paints used here are almost nauseating. I love it. Equally repulsive is the torn flesh at the top of the trauma. A lot of thought went into making these arms as vile as possible. Just look at how different and specific the tears are. 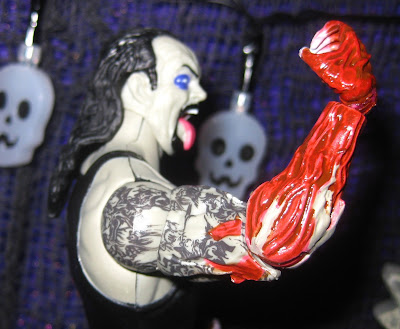 Above that you have the sleeves of tattoos that Undertaker is known for. They’re all black, but they look great. The detail is amazing and they aren’t too light or too dark. Mattel has gotten very good at making skin art look right. 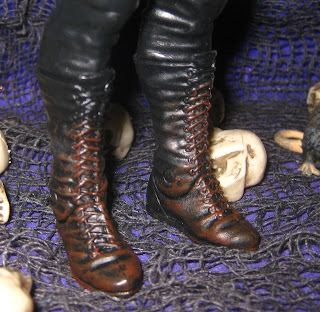 Finally, Undertaker has the same detailed and grimy boots as the rest of the figures I’ve reviewed. I’m glad the design team carried this across the line. It almost doesn’t make sense because why the heck are everyone’s boots so dirty, but nothing else? But whatever. It adds to the spookiness. 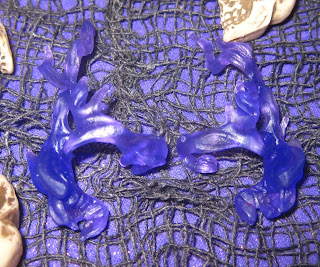 Undertaker comes with two purple magical energy thingies that are meant to clip onto his arms. They don’t totally work all that well. Once you take the figure out of the package, they will never attach to the arms in that same way again. It almost seems like they’re recycled from another toy because they don’t fit well on this figure’s arms in any way. You really have to get creative with how you attach them. 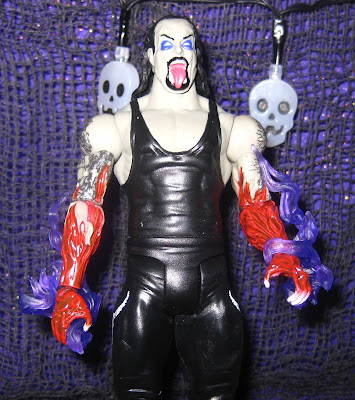 They’re okay, but Mattel could have done better here, especially since they’re all this figure comes with and an important part of the whole design. 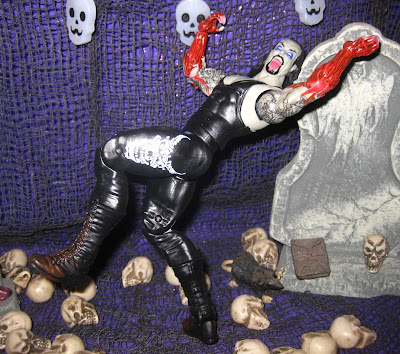 Mattel has two ranges of standard WWE action figures – Basic and Elite. Elites are super articulated, have detailed paint apps, and cost twenty bucks or more. Basics have much less articulation and paint and cost half as much. I have to say – the ten dollar basic figures are the best deals on the toy market right now.

As a cost-saving measure, Mattel will carry accessories from the Elite line to the Basic line when it makes sense. So a Basic figure might actually end up with some fancy HHH kneepads or something only because it costs Mattel less to do it that way.

This figure has a very good amount of articulation for a Basic figure. The shoulders are ball jointed with bicep swivels, the wrists swivel and pivot, and even the covered left boot has a swivel at the top under the trouser leg. The only significantly limited joints are the hips, which are simple pivoting joints. You can still achieve a wide variety of poses with this figure. 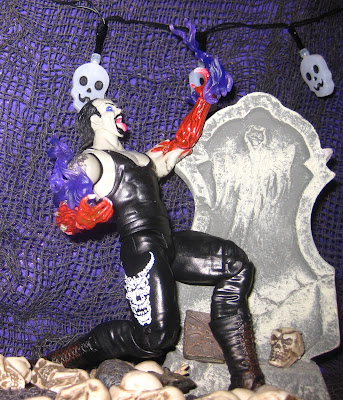 As ill-fitting as they are, the magic thingies do add an element of fun. They can be situated on the arms in a number of ways and I did have a lot of fun figuring out different things to do with them. They just don’t stay in place well at all. And without them the figure just looks like the skin has been torn off of its arms, which is not the story here. 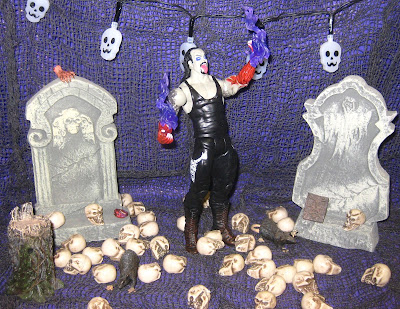 Despite the not-great magic effects, this is an awesome action figure. It’s the gnarliest of the WWE Zombies that have been released and my favorite if only because it’s Undertaker, who is the most appropriate wrestler to apply this gimmick to. Kudos to the design team for coming up with a cool way to represent an undead Deadman. 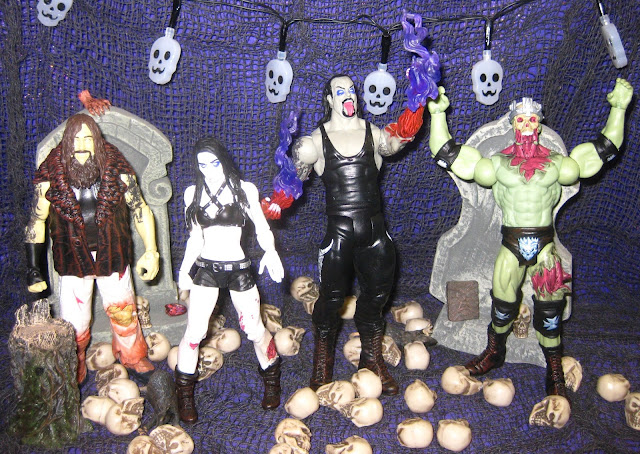 To wrap up this line a little bit, I’ll just say that I love it. I was dubious of the $13 price tag at first, but now that I’ve seen these up close and in person I think they’re totally worth it. A good deal, even. I’ll probably end up getting The Rock and Dean Ambrose at some point.

I would love to see this line return next year. I know we have WWE Mutants between now and next Halloween, which I’m not as excited about, but I think there’s still plenty of opportunity to explore Zombie wrestlers. Just off the top of my head, I’d definitely pay money for undead versions of Brock Lesnar, Finn Balor, Becky Lynch, Kevin Owens, and probably a bunch more. As long as the design team can keep each character unique and find ways to incorporate their personalities, I’m on board for more WWE Zombies!

If you want your own Zombie Undertaker, buy from Amazon and help Needless Things pay the bills!: