31 Days of Halloween: Skip the Store Bought Prosthetics - by Beth 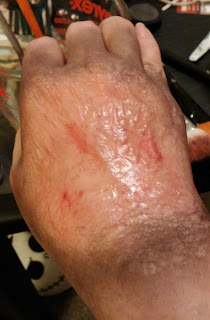 My brother manages a restaurant in Charleston, SC that turns in to a haunted house every Halloween. For the first time ever I'll be visiting at just the right time to attend. Having a background in makeup though, I've been roped in to helping out. Back in high school I played around with some theatrical makeup, but after that it was strictly beauty makeup for me. It's been years since I've done anything even close to the Freddy Krueger-esque burns he wanted me to do on their bartenders. Since I was offered a bar tab in exchange for my help I was determined to try. And to help you try to save yourselves some time and money with your Halloween costuming (makeup can make or break a costume) I thought I'd share the results. I promise to offer more than just making a good burn so there's plenty of other advice here for all your scary makeup needs.

I spent some time browsing the Halloween stores trying to figure out what to do, and more importantly, how to do it. I'm not a huge fan of latex or spirit gum as they can both cause reactions on the skin. I still kind of remember my way around liquid latex so I bought a tube of that to play with. There were a bunch of extremely expensive pre-made prosthetics, but they required spirit gum (which can be really irritating) to attach them, and I'd still have to use latex to blend them into the skin. Knowing that some poor girls were going to have to serve drinks in this stuff all night made me a little wary of going with those. I'd also have to spend upwards of $50 for something that wouldn't even look that realistic without some extra doctoring.

So as any sane person would do I turned to the internet. I found some sort of helpful DIY sites, but they lacked detail, or were much more intricate than I was going for. This didn't need to be good enough for a movie, but I wanted it to look passable for drunks in a dark bar. Unfortunately, the liquid latex from the Halloween store was garbage. I did find several websites that showed how to use plain gelatin to produce a much better effect. I can't speak to how colored (flavored) gelatin works, but the plain stuff did well for me. I think clear is better anyway since you want your skin to show through in some places (especially if it's a fresh burn). I never found instructions on a proper mixture online so I had to do some trial to get it right. I found that you get a fast drying thicker consistency using twice as much gelatin as called for. As in, the gelatin instructions said 1 packet to 1/4 cup water so I used 2 packets.

Let's go step by step shall we? Once you've got your gelatin and water mixed and heated for the love of god please make sure it's not too hot before applying it. I had a red splotch on my hand for a day because I heated my mixture in pyrex, and couldn't feel just how hot it was from the outside. You want it warm enough to stay thin for now, and as it cools it'll get thicker which will also help you build it up easier. Thick is also good if you want to do some kind of nasty buboes or wounds, and if it gets too cool to work with just pop it in the microwave for a few seconds. Take a fan brush or other flat brush and spread a thin layer to the edges of where you want your makeup to end. Leave a little space to blend into the skin on the edges, and I would steer clear of getting too close to the eyes or mouth. I mention the mouth simply to be practical. You'll probably want to have a drink or speak to someone at some point during your night.

Hold your skin taut while using a hair dryer with a cool setting to help speed the drying along, and add another layer as each one dries moving your "painting" farther in each time. You're trying to build up in the center and the edges should fade into your skin. Keeping the area taut creates the cool wrinkled effect once it's dry. After 3 or 4 layers you can stop if you want to do more Deadpool crackled burns. Keep going if you want the full Krueger though. After a good 6 or 7 layer build you can drag a popsicle stick though the still damp gelatin to create more of a melted skin effect. The pics I took of that trial turned out horrible so you'll just have to wait til Halloween for me to post pictures of the real deal. I don't have time to recreate it today. It took me a good 5 or 6 hours to get this far since I'm doing all the experimenting from scratch. You, my friends, will be able to do this in an hour (maybe 2 depending on how much area you want to cover) so I've already saved you a ton of time!

Once you get everything to the thickness you want you can either leave it alone and apply makeup directly or you can do as I've done and use a pair if tweezers to pull a few pieces of the dried gelatin away. You can leave them hanging on slightly or just take a chunk out. Just try not to make it look perfect. You want things looking as natural as possible so random is good. Now you may notice that you're edges are looking a bit dry and crackled. A thin layer of vaseline brushed very lightly around the outside will fix that right up. Vaseline will also make whatever colors you're applying more translucent so I put just a tiny amount all over. Don't go crazy or the makeup won't stick. Blotting with a paper towel will also help absorb the vaseline in spots so that your color goes on a little unevenly. Again, random is good. Use a stippling brush or sea sponge to go in with red, pink, and a just the smallest flecks of black. Very carefully add one more very thin layer of gelatin to seal everything in and you're ready to hit the town. Or you can add black around the edges for a charred look. I used cream makeup for this whole thing so you'll need to top with powder to make the black look "crispy".

But what else can this wonderful process do you ask? Well you can build up a very narrow area with a whole lot of layers, and use the back of a butter knife to cut into it. Good for slit throats, and all manner of other grossness. In the picture you can see why I say not to hold the skin taut for this effect. The puckering on the edges isn't what you want people to notice here. I did use fake blood, but I mixed it with the black cream makeup because store bought blood looks fake as shit. It's my only experiment with this one so you can probably learn a lot from what I did wrong here. Saving you time once again!

And what if you don't want burns or wounds? Well here's a few more tips that I've learned from actual practice, and not just a week of screwing around:

Zombies aren't blue and grey (unless you're going for a joke zombie). A fresh zombie would have much more flesh tones with brighter reds, and maybe just a hint of black scattered in to hint at the beginning of rot. Older zombies will have more green and brown with a bit more black spread through. Regardless, stippling is the way to go. You don't want uniform color throughout because that's what looks fake. The great thing about this is that you don't have to be a makeup artist because perfection isn't the key. Also, don't waste money on those cheap ass Halloween makeup kits you see at grocery stores and pharmacies. Want to get that mermaid look? A cheap pair of fishnets makes an awesome stencil for basically no money. You'll want to use a sponge for this application though since stippled mermaids aren't pretty. I even saw a stencil kits for a pop art girl makeup. One good brush is all it takes to pop some damn dots on your face. The makeup quality is also highly questionable given that most of these kits run for $4. 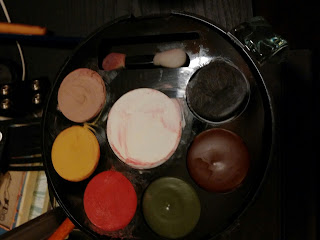 The last best piece of advice I can give for your Halloween makeup horror is to buy a halfway decent makeup kit at the Halloween store (mine was $10), and go nuts. There is shit in your cupboard and closets that can take your costume to the next level with minimal cost, and just a tiny bit of effort. Now to figure out what I'm going to do with 20 packets of unflavored gelatin. People like horse hoof flavored jello shots right?