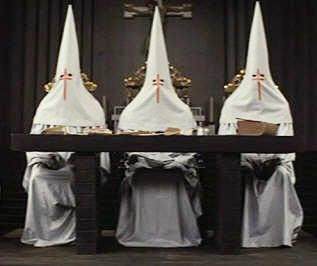 Halloween is finally upon us! Here in Devlin's Domain I will be celebrating by talking about the true horror of religion as framed by director Ken Russell. Religion is often the enemy of Halloween, but it is also part of the appeal. If there was no light to hide from, the darkness wouldn't be so comforting. Religion has created all the evil monsters that people have been afraid of throughout the centuries. It feeds the darkest parts of the human psyche with its demonic imagery. I'm here to bite the hand that feeds.


The Catholic religion has the largest group of followers in the entire world. I wasn't raised Catholic, but did have the opportunity to attend services a few times. I was struck by all the excellent imagery that surrounded the church. The most eye-catching, of course, was the giant statue of a crucified Jesus hanging from the ceiling. When you're brought up thinking this is normal you never think about how crazy it actually is. There's a mutilated human corpse hanging from the ceiling. If you had no concept of religion and entered a sanctuary like this you would likely feel a bit of terror.

The Catholics have had a pretty shady history and probably have the largest body count of any religion. They are guilty of acts of genocide and have killed innocent people for practicing science and medicine. I can't help but wonder how far behind human progression has been set back by the ignorant majority. How many great minds met their end too soon at the hands of  insane religious enforcers?

Organized religion has always been a business in a way. They make a ton of tax free money by selling a product that doesn't exist. Catholics, however, have not only been a business, but have been organized criminals and politicians. They practically ran countries by manipulating governments through criminal means. Centuries later they are not known so much for their body count as they are for the bizarre and sickening sexual conquests of their priests.

It's baffling as to why the church would require their priests and nuns to submit to that extreme sexual repression. It's so unnatural that it's bound to take a mental toll on the person and probably explains the perversions that surface after many years. Unless, of course, the altar boys were an incentive for a pedophile to enter priesthood to begin with.

There are plenty of decent people who follow the Catholic faith and it's usually not the followers at fault so much as it is the leaders. Ken Russell stirred some shit up in 1971 with his ultra-blasphemous masterpiece that exposed the dark side of the religion. He went way too far with a couple scenes that ended up being censored. It's hard to find this film fully intact, but if you can it's totally worth it. tonight is the Devil's night and this is...

Set in 17th century France, Father Urbain Grandier overseas the city of Loudun.  He's a bit of a local celebrity. As he marches through the streets the nuns pile on top of each other just catch a glimpse of him from a high window. They're all younger females so they are at the height of their sexual urges. they all cackle around the convent before getting shut down by Sister Jeanne, played by Vanessa Redgrave. Sister Jeanne has a strange physical deformity that appears to be an extreme case of scoliosis. She's the resident party pooper.

Despite her strict and godly demeanor, Sister Jeanne has a burning fire in her loins. After kicking the younger nuns out she crawls into a nook with a barred window to cast eyes on Grandier herself. She clearly has some unhealthy obsession with him. She clenches her rosary as she gawks over Grandier as he walks by. She appears to be near hunchbacked orgasm just from the sight of him. Unfortunately for Sister Jeanne, Father Grandier can get any woman he wants and isn't gonna pick a hunchback freak like her. 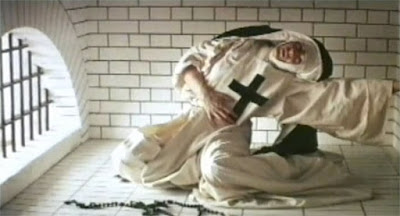 Turns out Grandier is sleeping around a bit. He finds out he's impregnated one of his lovers and makes the move to marry her. Elsewhere in France, Cardinal Richelieu tries to figure how to take control of the city of Loudun. Father Grandier has been blocking their attempts to exert total control of the city. So the Cardinal and company conspire to rid the city of Grandier altogether.

Sister Jeanne's sexual repression begins to drive her into madness. She drifts into a deranged fantasy as she kneels in church to pray. She sees Father Grandier as Christ on the cross, stepping down and moving toward her. She falls to her knees as he approaches and begins to lick the gaping wounds on his body. This is probably my favorite scene of the movie. It's just so damn blasphemous and "offensive", not to  mention artistic. It's really quite beautiful. 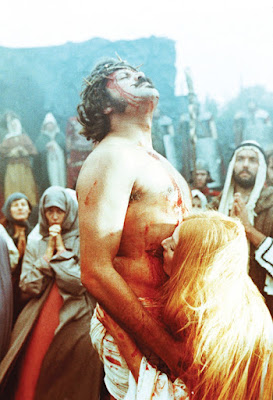 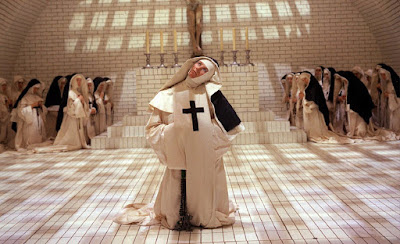 The priest reports to the Cardinal, who is delighted to hear the news. He sends a mad witch hunter to the convent to gather evidence against Grandier that he can use to have him removed from his position. Sister Jeanne writhes around like a possessed wild woman as the priests torture her for information. They spread her legs open and shove a turkey baster full of some boiling white liquid into her vagina and mouth trying to purge her of demons. 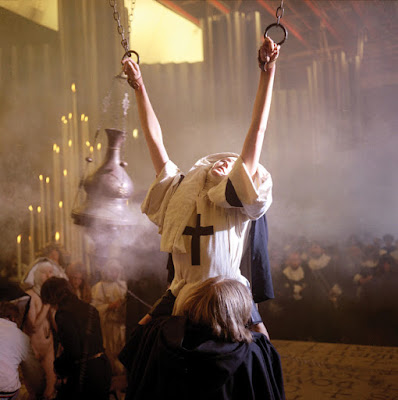 The other nuns are overwhelmed by all of this and begin their own descent into madness. Before you know it all the nuns have done away with their clothes and naked hysteria ensues. This is a scene that has been removed from most versions of the film. It's referred to as "The Raping of Christ". It's basically a big nun orgy on top of a large statue of a crucified Jesus. Nuns are having sex with each other and also straddling the faux Jesus and it is awesome. It's also my favorite scene of the movie. I can have two favorites.

Of course after the destruction of his church, Grandier is arrested and subjected to questioning and torture. He maintains his innocence, but those crazy Catholics don't take no for an answer. They shave the guy's head and strap him to a table where they beat his legs with a hammer. They manage to make the torture seem brutal without being too graphic. It relies mainly on Grandier's emotions. Even after being hobbled he refuses to confess to being a warlock.

Despite repeatedly claiming his innocence, the church moves to even more extreme measures. They take Grandier out to a public execution via immolation. They give him yet another chance to confess guilt and probably still die, but he refuses again. So the crazy witch hunter wields a torch and sets Father Grandier ablaze. It's a pretty gruesome death scene as we get to see his flesh charred in the flames. 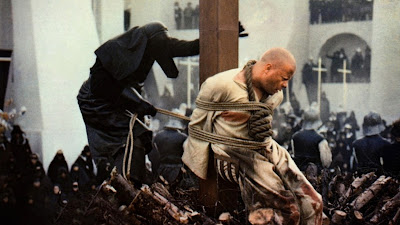 The plot of this movie is pretty thin, but the delivery is incredible. It's got a two hour run time that just flies by. The first half of the film has a slower pace, but it really flips out as soon as Sister Jeanne loses her shit. A lot of people are unaware of this classic, and it's a damn shame. Of course, that's why I'm here. Finding this movie may be a bit of effort, but it's totally worth it. I'm hoping Criterion puts this out uncut eventually, but it doesn't look to be any time soon.

IMDB score is 7.8 which is legit. I'll give it a solid 8 cause I think this is an amazing film. It's a great work of art that tackles a lot of religious issues that most people would have shied away from in 1970. Thanks for visiting for this special Halloween edition. Make sure to come back for the next installment of Devlin's Domain and remember that Hell is empty and all the Devils are here.

About Me: I have a couple of different aliases, but for this column I will use my middle name. I am Devlin and I currently reside in Atlanta, GA. 33 years of age and still feeling immortal. Former Rockstar, current Pro Wrestler and hell, I'm still a Rockstar at heart. I got my first taste of obscure cinema when I was about 8 years old. My Dad would take us to the video store every weekend to stock up on classic horror films to watch on his projector. They were mostly harmless, PG-rated horror films like the great Universal monster movies. Then one night he rented a movie for himself to watch after we had gone to bed. I was so intrigued by this film that I wasn't allowed to see. I begged and begged and he eventually caved. That night I was exposed to a film unlike anything I had seen before. Ever since that night I wanted to find more films that gave me that same sensation. I wanted to feel shock and disgust. I found my place in the Horror aisle. The film I watched was Faces of Death. Thanks Dad.www.facebook.com/DevlinValek