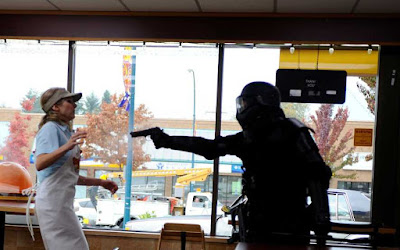 Do you hate your boss and the job you have absolutely no passion for? Are you enraged when you go through a drive thru and find your order is wrong because some mouth breather can't perform a basic task? Do you dread making a customer service call, because you know you will  be transferred multiple times and have to give the same information to each different person only to ultimately have your call dropped and have to repeat the process? Do you wish you had a bazooka handy at 6pm so you can blow every motherfucker off the interstate, because you're already an hour late for an event thanks to people that can't drive? If so, then this movie is for you.

I'm kicking off the 31 Days of Halloween with a movie that may or may not be considered horror. It really depends on whether you relate to the killer or the victims. Since the victims of this film are your average jag off, I'd say most people will find this frightening and disturbing. Therefore it has earned it's spot in the Domain.

Uwe Boll makes really bad movies. Uwe Boll will also punch you in the face for criticizing his work. Some of you may recall his stint on garbage video game films such as Bloodrayne, Alone in the Dark, House of the Dead, and Postal. If you weren't aware these were all made by the same man, now you have an idea of what kind of filmmaker we're dealing with. Sadly, these weren't even is worst films.

In 2009 Uwe Boll released a cinematic anomaly. Nobody expected this from a guy who made a career out of producing mind numbing trash. Perhaps he was just dealt a bad hand his whole career. Perhaps he did all he could with low budgets, B-list actors, and shit scripts. It's hard to say, but it looks as if he had his hands on this project all the way through.

The film has a vibe like that of Falling Down and draws inspiration from real life events like the Columbine and Virginia Tech massacres. It's the closest thing we may ever get to a Grand Theft Auto movie. It's the dissection and destruction of the American Dream. This is Uwe Boll at his psychotic best. This is...

Brendan Fletcher does a magnificent job as the main antagonist or protagonist, depending on your point of view. His name is Bill Williamson, and he lives with his parents and works a low paying job as a mechanic under a douchebag supervisor. His parents are pressuring him to pursue college and do something with his life. But he's more consumed with the problems in the world that he is continuously exposed to through TV and radio. 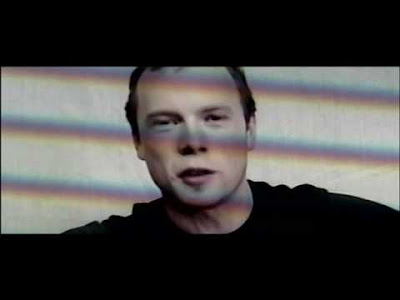 It doesn't help that his only friend is a left wing activist/philosopher named Evan Drince. Evan fills Bill's head with all kinds of ideas about how the world should ideally work and what to do to change things. In between philosophical chats they enjoy a little bit of paintball in the woods. Little does Evan know that Bill is getting lots of target practice this way. 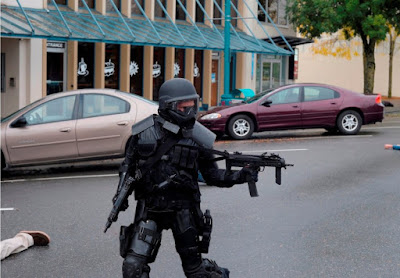 Turns out Bill is taking all of these talks and information to heart. He is frustrated by the monotony of everyday life. He feels prisoner to a system that he had no choice in. He sees overpopulation as part of the problem as to why culture has become so deranged. So he does what any decent sociopath would do, he stockpiles a bunch of armor and weapons and gets ready to wage war on the entire town.

Bill's no dummy though, his first move is to remotely drive a van full of explosives into the local police station. This kills off most of the law enforcement and moves all the ones that were out on patrol back to the scene of the accident. While the police are tied up with that hysteria, Bill walks the streets in full body armor and starts unloading a hail bullets onto anyone in his path. 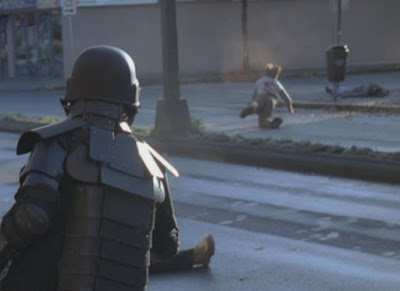 He visits a coffee shop and takes out the owner, whom he'd had a spat with earlier. He moves on to a beauty salon to cool off and take a break, but then has to kill everyone inside because they saw his face. I also imagine he held some prejudice against the type of people in there. A bunch of beauty queen, soccer moms who gossip about celebrities while getting their toes done and lack any thoughts of substance in their shallow little minds. Everyone in the salon is left dead in a bloody pile.

He makes another stop at a bingo hall and gets a drink and a sandwich. He manages to sit there mostly unnoticed by the elderly bingo players and decides to spare them. Then he keeps it moving and heads to rob  a bank. He makes a scene out on the street burning a big bag of money. We find out later there was a little slight of hand here. 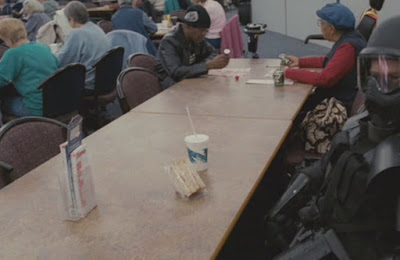 This movie truly is on a rampage. Bill mows down a ton of people on his path of destruction. It's not quite the reckless, chaotic, killing spree that it seems to be though. Bill thought way ahead on this one. Packages were sent to his friend Evan's house, and Bill has an appointment with Evan for a paintball game. While being chased to the rendezvous point by the police, he sets off bombs along the way to get them off his tail. Bill has a masterful plan. 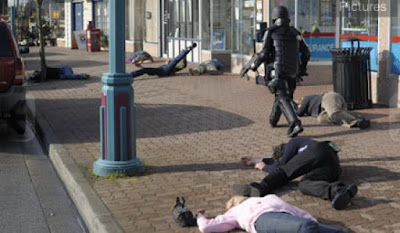 I'm not going to spoil what his plan ultimately is, cause you should watch this movie anyway. It's a violent, bloody mess and I enjoyed every minute of it. I found myself relating to a lot of Bill's grievances and raged out vicariously through him. It's a tale about a guy who rebels against a normal life and wins. 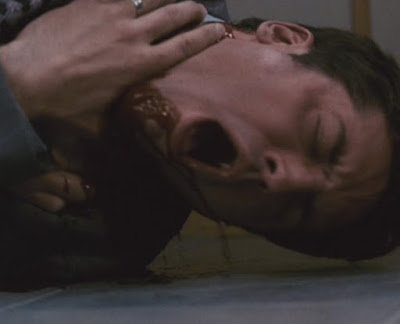 I can definitely see some people not being able to relate to the guy at all, but still wonder how you can't. I'm a pretty calm and collected guy, but even I fantasize about doing horrible things to people. And it's ok to fantasize, just as long as you don't act on it. I don't see anything wrong with enjoying watching the mass murder of innocent people. One of the most popular video games of all time, Grand Theft Auto, encourages the interactive mass killing of innocent people. I think you need a conduit for anger to take the edge off sometimes. Then we can calm back down before going back to the grind.

IMDB rating is a 6.3, which is very impressive for Uwe Bill. I personally would give it an 8. I had a good time watching this and the sequel was actually decent too. Part 3, from what I heard, has lost its way. I won't write it off just yet. Maybe it will end up on the Domain one day.

That's it for this week's edition of Devlin's Domain. There's still plenty of Halloween left. Make sure to check out all the great posts on the Needless Things site. See ya next time.

About Me: I have a couple of different aliases, but for this column I will use my middle name. I am Devlin and I currently reside in Atlanta, GA. 33 years of age and still feeling immortal. Former Rockstar, current Pro Wrestler and hell, I'm still a Rockstar at heart. I got my first taste of obscure cinema when I was about 8 years old. My Dad would take us to the video store every weekend to stock up on classic horror films to watch on his projector. They were mostly harmless, PG-rated horror films like the great Universal monster movies. Then one night he rented a movie for himself to watch after we had gone to bed. I was so intrigued by this film that I wasn't allowed to see. I begged and begged and he eventually caved. That night I was exposed to a film unlike anything I had seen before. Ever since that night I wanted to find more films that gave me that same sensation. I wanted to feel shock and disgust. I found my place in the Horror aisle. The film I watched was Faces of Death. Thanks Dad.
www.facebook.com/DevlinValek