Most little girls love their tea parties and teddy bears.  They're so cute and cuddly...oh, just so adorable.  But what if you're a nerd or a geek or a Goth or just straight out not a normal?  Well then teddy bears just don't cut it.  Vampires, zombie ponies....ahhh, there's the sweet cuddly-wuddly you want.  Luckily someone thought of that.  Today I'm going to introduce you to the most adorable undead plushies you've ever seen.  The Vamplets are the simply the cutest, gore-fest cuddlies you'll ever want to squeeze.  And unlike the non-plush variety of undead you see in movies and TV,  they don’t squeeze back. 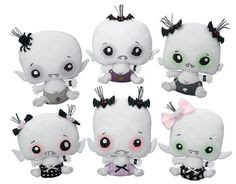 In the year 2000 a company based out of Clearwater, Florida founded itself with a small investment centered on 6 Vampire babies.  Each had their own cute name, box shaped like a coffin, and you could even buy a baby bottle full of blood to go with them.  The names just made them even more adorable; Count Vlad Von Gloom, Cadaverson Nightshade, Midnight Mori, etc.  What started out as a s mall scale start-up quickly went off into a flurry of activity thanks to the wonderful world of Conventions.  ComicCon, DragonCon, etc…the Con circuit spread these adorable undead plushies throughout the masses and they quickly caught on like wildfire.  Now there are multiple lines of undead cuties to choose from. 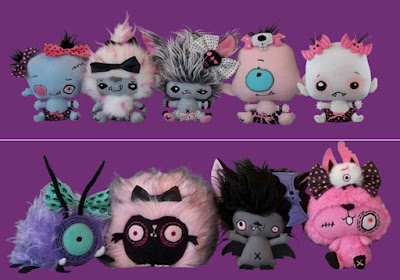 The first run- which currently remain in a sold out status on the web site thanks to the huge popularity of these adorable creatures- was that of a series of vampire babies.  Each has their own morbidly cute name and instructions for you, the crazy human deranged enough to adopt the undead.  The boxes they come in just add to the awesomeness; a black and pink colored cardboard coffin that, if you extract the doll from carefully, can still be used as a bed for the plushy.  That is if you are not snuggling with it nightly anyway.  What?  I'm thirty-seven and I think they're adorable enough to borrow from my daughter and cuddle with.  Don't judge me!  You read a blog about geek culture, toys, and wrestling, ya freak! 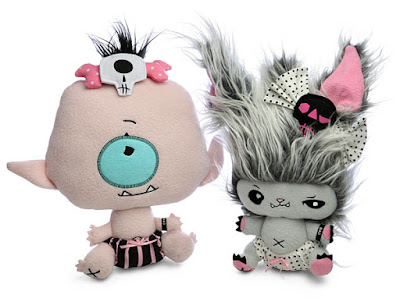 The Vamplets are tagged with wash/care instructions and a tag with their names, plus each has their own creatively decorated Gothic diaper and a bio to tell you all about the crazy little quirks of your adopted creature of the night.  The stitch work is flawless and the detail is a mixture of adorable and downright creepy; sad and adorable baby eyes with dark circles around them that give them the sunk-in look of the dead.  Teeny tufts of hair that are oh-so cute held together by hair bows made out of bats or small hair bonnets shaped like spiders.  The second Vamplet run added not only two more vampire baby variants, but they decided that on top of this revenant based cuteness they needed more monstrous creatures.  The second run added wereroaches, Cyclops, zombie vampire kittens, rabid rabbits, and even a werewolf.  This run truly steps it up a notch.  The new creatures are covered in fur that make the baby alien from Chicken Little look like a bald newborn.  They began experimenting with color pallets unheard of in the realm of the creepy, adding something the Gothic world had never seen before; items that they wanted for their Gothic pad that had pinks, tans, even teals.  And if you are wondering if this change in the norm worked, this second Vamplet wave stays sold out on the web site as well.  Both of these lines you have to catch at Conventions or whenever they get a fresh stock in on any online retailers that sell them.  That is how quickly they fly off of the shelves. 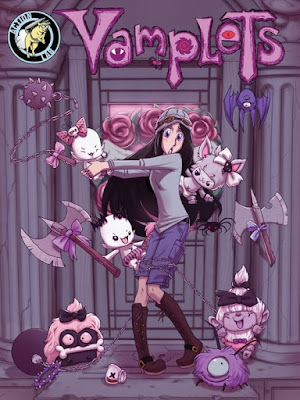 You can look at the two newest lines and tell just how much the detail has increased from run to run.  Mummies, Vampire Bat babies, you name it.  They manage to balance out the cute and the scary, the colorful and the Gothic, and make both the children and the adults want every item in their line.  They became so popular that Whoopie Goldberg even reviewed them live on The View, and they expanded their sales into cell phone cases, graphic novels, bracelets, and even temporary tattoos.  The web site also has a SAVE THE BAT! link, which directs to an area selling wristbands to raise charity money for bat sanctuaries.  The website is interactive, giving you the chance to experience the nursery in which the babies live digitally, pull up their bios, even go the town hall to print up the official adoption certificate.  There is also a blog for site updates and the online store itself, as well as their social media links.

My teen once saved four hundred dollars’ worth of allowance during the year for DragonCon spending money to use as she pleased.  Over two-fifty of that she spent at the Vamplets booth and she still stops by every year to check out their new stuff and to see about grabbing anything she missed.  Whether you are straight laced or Gothic, nerd or normal, freak or a geek, the beauty and detail and fright of these undead cuties will make you spend every bit of cash you have.  Vamplets are the new snuggle buddies of the century.

Find more from their website (I will link ya at the end of this piece,) as well as looking on ThinkGeek, Ebay, and Amazon.  Much like the supernatural in general…they're everywhere.