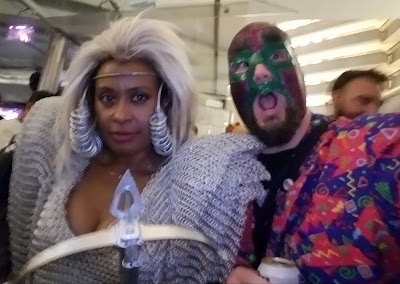 If you haven’t read Day 1 – Thursday or Day 2 – Friday yet, click those links and do it!

Saturday was the big day.

As excited as I am for all of the things that I do at Dragon Con, The Dirty Dirty Con Con Game Game Show Show is my baby.

But prep for that didn’t start until 7 PM and I had a morning panel to attend to first!

I was very excited about being on the How Horror Fans Raise Kids panel for the Horror Track. First, it was a topic I was quite familiar with and had a lot to say about. Second, I had thoroughly enjoyed the atmosphere of The Shining Panel the previous night. I was eager to return to this new Dragon Con family. As such, I had been very conscious of my alcohol intake on Friday night. I wanted to be sure I was up on time and that I was going to be sharp enough to be a compelling speaker.

As I’ve mentioned before, I take panels very seriously. I want to have fun, but I also want to earn the precious Con time that the attendees are giving me. If someone is coming to listen to me talk for an hour, I want it to be worth their while. And hungover Phantom is not worth anyone’s time. Just ask Mrs. Troublemaker.

I was up bright and early and with plenty of time to add some hot water to my oatmeal. Yes – oatmeal. For the third year now I brought some of those instant oatmeal cups with me so I didn’t have to pay for breakfast every day. You just heat up some water in the coffee maker and you’re good to go. So I sat back with my breakfast and watched some Dragon Con TV.

Side Note: For the first time ever, the Dragon Con Parade was broadcast on the local CW affiliate. Mrs. Troublemaker recorded it so that I could check it out when I got home. It was terrible. Obviously Brian was a great host as always, but every decision the CW made – from where to shoot to who co-hosted with Brian to which part of the parade they broadcast – was the wrong one. I felt it made Dragon Con look small and lame.

Meanwhile, Crispy and company had the most professional setup they’ve ever had, great banter, and a sharp picture.

After breakfast I got suited up and headed out. It never even occurred to me that the Westin was completely and utterly blocked off from where I was by the Dragon Con Parade.
I walked out of Peachtree Center to a solid wall of people, and beyond that a solid wall of parade. Even then, I didn’t recognize my predicament until I got to the corner where I would normally cross to the Westin side of Peachtree. It was exactly where the parade turned and went down another street. I sent Derek a message explaining what was going on. The whole time I was trying to figure out a way across, but the only thing I could come up with was to go all the way back down to Courtland, over a block, and back up to the Westin. It would take half an hour just to get to the front door of the hotel. I’d miss most of the panel. I told Derek I was so sorry – and I have rarely meant it more in my life – and I headed back to my room.

It took me more than thirty minutes just to get back there, so I never would have gotten to the panel at any decent time.

With my morning plans shot, there was only one thing to do – go ahead and start my annual Dragon Con Mope.

I always think it won’t happen, but every year- usually during the day on Saturday – I get hit by this weird melancholy. At least this time there was a reason.

After a couple of hours I got a message from Belligerent Monkey about dropping off his prizes for the game show. I told him to come on up, and let me tell you – when I opened that door and saw him and one of our buddies standing there, it cheered me up. I needed some human conversation and some company.

We sat in the room for a couple of hours and just relaxed, drank beer, and talked about being old men. We also whipped up a White Steve Harvey Insta-Cosplay that I can’t show you for legal reasons. Those guys really pulled me out of the shit and I appreciate the heck out of it. I very often get so wrapped up in whatever it is I’m doing that I forget the simple joy of just hanging out and being a human. Without going off on another work tangent, my free time is rare and precious and it tends to be either family or non-paying job (this). As I’m writing this I am realizing how little time I give myself to just chill with friends.

Side Note: When I arrived at work on Friday I was informed that one of my co-workers that has vacation selection before I do is going to pick Dragon Con weekend next year in order to block it off so I can’t take it and then demand money from me to give it up. That’s the quality of human I work with.

After the guys left I ran over to the food court and grabbed my ceremonial pre-game show Checkers dinner. A gamble, for sure, but a tradition.

I’m not going to go into detail on the game show because you should have been there. If you couldn’t get in, you can still go into the Dragon Con app and tell them we need a bigger room next year. It worked last year.

All I want to say is that my heart is moved by all of the hard work done by such a large group of people on something that I am so proud of. I had never had true pride in a job in my entire life until The Dirty Dirty Con Con Game Game Show Show. Every second I put into it is worthwhile and a labor of love. So thank you to Dana, Sean, and Oz for being amazing beyond words and helping me to make something important.

We also had our two production assistants, Beth and Rebeccah, who were incredible and busted ass and made so many things happen. Thank you both.

Ryan Cadaver and K80 were our Celebrity Guest Stars and they were amazing and I don’t know how we’re going to figure out something different for them to do next year, but we will.
And then there are our volunteers that gave up their precious Con time. The show was so much bigger this year and we never could have done it without these wonderful people, who all made my heart grow three sizes by volunteering within an hour of when I asked for help.
Darren, who was our fabulous crowd wrangler.

Michael B., who brought in his amazing wife and stuck around until the very end to make sure we were done.

Rachel B., who took the initiative to make sure our guests with disabilities were well taken care of.

Michael F., who was there from the beginning until the end.

Rosalyn F., who was constantly finding things to do and doing them.

Rachel G., who was the first to volunteer, technically last year, I think.

James G., who went all the way back to my room to get the banners and my bag.

Geoff, who is one of my oldest and dearest friends and has always been there for me. Also I think he might’ve checked IDs after we were told at the last minute we had to check IDs. I can’t remember for sure who did that.

Derb, who is one of the most fun people ever and took a break from fun to help out.

Nicole G., who is a bona fide badass and has her shit together and you can’t teach that.

John C., who many of you know is incredible and who worked the door and numerous other jobs.

Beau and Sally, who helped out where they could, which I am now thinking might have included Beau checking IDs.

Ramsey and Jennifer, who gave up their time so that we would actually have pictures this year! (coming soon)

Finally, huge thanks to Dragon Con Tech Ops and security. We didn’t always know what we needed, but those amazing volunteers were there for us.

There were others there that helped and I’m sorry if I’m overlooking anyone’s contributions. As you can see, it was a bigger production than anything else I’ve ever done in my life. If it wasn’t for Dana’s organizational skills (and support and inspiration), I never could have pulled it off. There really is no “I”. It’s all “we”.

The show had some minor issues, but nothing on the scale of the problems we’ve dealt with in previous years. It was fantastic overall and aside from some douches in the crowd doing their best to ruin everyone’s fun, I think a great time was had by all.

After the show, we were exhausted. Speaking of exhausted, my back is screaming and my time is up.

Come back next week for 31 Days of Halloween! In the meantime, check Needless Things every day for new and original content from Beth, Jerry, Devlin, Christina, and all of the Needless Things Irregulars!

If you’re here checking out Dragon Con stuff and haven’t visited Needless Things before, thanks for coming by. Our writers post five times a week about toys, movies, music, and all manner of pop culture dorkery. The Needless Things Podcast posts once a week, usually on Friday. Come back after Dragon Con for full coverage of what went down, as well as audio recordings of our panels.

Our 31 Days of Halloween begins in October! It lasts all month long and everything on the site is thoroughly Halloweeny!
Posted by Phantom Troublemaker at 11:00:00 AM