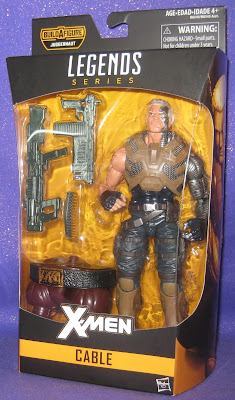 I unloaded on Mattel in my Harley Quinn review and today I’m taking aim at Hasbro.

I’m mostly over Marvel Legends. Actually, it’s not even specifically Marvel Legends or DC Multiverse that I’m fed up with. It’s twenty dollar mass market twelfth scale action figures. The price is too high and the quality is too low.

In the case of Marvel Legends, I’m sick to death of seeing boring characters that only exist because Hasbro was able to reuse parts. I’m also sick of seeing hundreds of Marvel Legends figures I don’t want clogging the pegs while not being able to find the ones I do want.

Having said that, I was super excited when it was revealed that there was going to be a new wave of Marvel Legends X-Men. X-Men are the core of my Legends collection and while it’s conceivable that I could sell everything else, I could never part with my Mutant toys. They aren’t perfect, but they’re probably the best figures we’ll ever get of some of the characters. I don’t see a One:12 Collective Forge coming out any time soon.

I was not as excited when I saw the assortment. Havok, Kitty Pryde, Iceman, Jean Grey, Deadpool, Wolverine, Cable, and 90s Rogue. Six characters I already own. Yeah, they need upgrades and the new versions look good, but for twenty bucks apiece I simply can’t justify the purchases.

Rogue is one of my favorite X-Men and I don’t have a figure of her, but the 90s look isn’t my favorite. I would have preferred a modern look or her old green and black or even one of the Xtreme X-Men looks that saw poor circulation from Toy Biz years ago. But she was the one figure that was already pre-sold out by the time I got to Amazon.

Cable, on the other hand, was still available. And looked like exactly the Cable I want; very much like the one from the Deadpool video game that I recently completed: 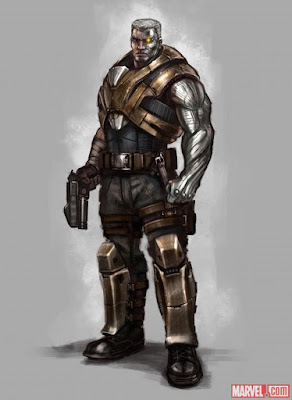 I like Cable and have never bought one because I didn’t like any of them. But this one looked great.

This a big ol’ figure with a lot going on. Especially when compared to many of the recent Marvel Legends releases. The colors are slightly dull and might not catch the casual fans’ eye at retail, but otherwise this is impressing me right out of the gate. 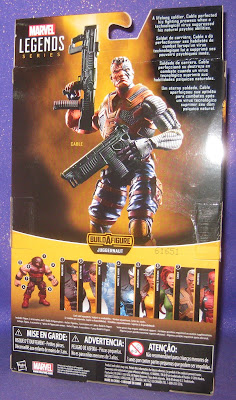 It’s a great, stylish window box with a bright yellow background to differentiate it from the hundreds of other Marvel Legends figures that have been clogging pegs for months. I still haven’t seen one of these at retail. Heck, I haven’t even seen anyone other than Captain America from the Civil War wave. And that was just once.

We are always way behind here in Georgia. 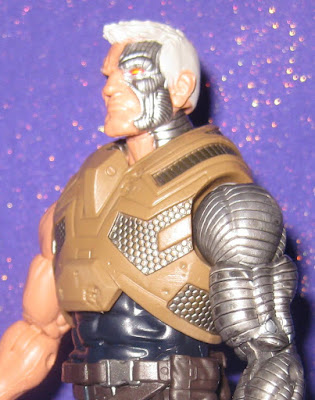 Even without the creepy, Terminator-style techno-organic virus on the face this would be a great head sculpt. This is absolutely the square-jawed, grizzled veteran Nathan Summers that we’ve been following for years. The hair has a lot of detail and isn’t just a flattop. The metallic portion has sculpted lines that aren’t just painted on. Speaking of paint, the apps look great. Cable’s human eye is centered and detailed. The scars and eyebrow work well together. The techno-organic portion has a wash in the sculpted lines and the yellow eye even has a red rim around it. 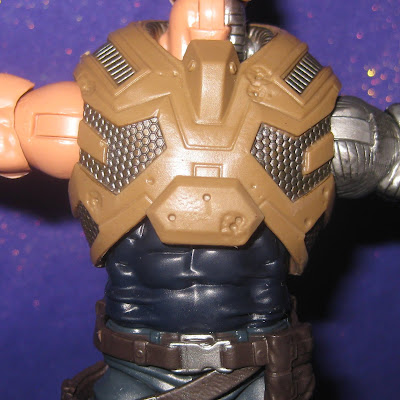 Cable’s vest armor thing is very reminiscent of some of my Masters of the Universe Classics figures, except it doesn’t make his arms stick out like a stupid idiot (™ Chris Jericho). Both it and his greaves have sculpted damage and bullet indentions that look great. More paint would be nice, but I think there’s about as much as could be expected from a toy in this range. The silver mesh parts look great and create a flexible look that makes this absurd piece of armor seem more reasonable. 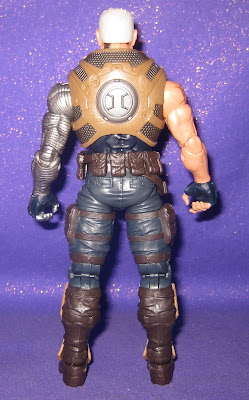 Cable has a plain, boring human arm that looks fine and that I think he shares with the Nuke figure; same as some of his other parts. I haven’t bought Nuke, so I’m not sure. Actually, I think if I had bought Nuke I might like Cable slightly less because I’m pretty sure there are lots of shared parts here. Cable’s other arm is not shared with anyone and looks awesome. Lots of sculpted lines and paint.

I like the glove consistency. There’s no reason he should have different gloves on each hand, but it’s the sort of thing toy (and comic) designers would do. 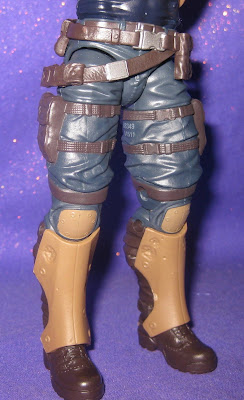 Cable’s waist and legs have all kinds of belts going on. He has a sculpted waist belt and some thigh belts, as well as a separate multi-belt combo piece. It all looks pretty cool and adds to the profile of the figure. The buckles and clasps are all nicely sculpted, but lack paint in some cases. 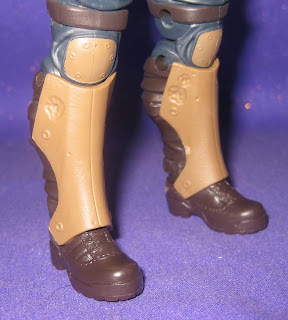 The boots and greaves have plenty of sculpted detail, but are pretty bland, color-wise. The riveted kneepads look good, but again – that tan color isn’t very exciting. 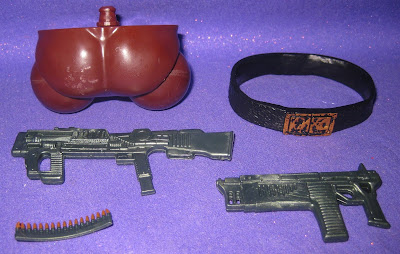 Cable comes with two rifles, a strip of ammunition, and Juggernaut’s butt and belt. 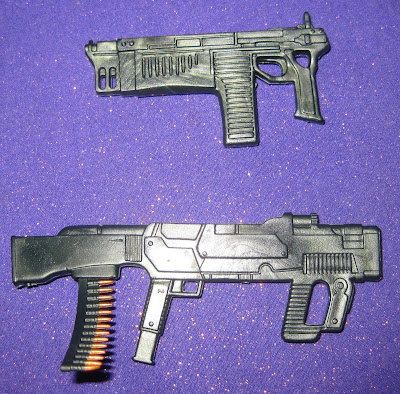 The rifles have a ton of detail. All the way back to Toy Biz, Marvel Legends has always been very good at producing futuristic firearms. These look great and Cable can hold them in a few different ways. They’re pretty satisfying to play around with, especially with the little ammo piece that plugs into the larger weapon. I do kind of wish these could be stored on the figure’s back or something.

The Juggernaut pieces look solid. But again – I already have a Juggernaut. Does this build-a-figure look better? Sure. But do I want to spend $120 on characters I already own to get another character I already own? I do not.

That being said, I do appreciate Hasbro keeping these characters in circulation for collectors that might be new to the line. 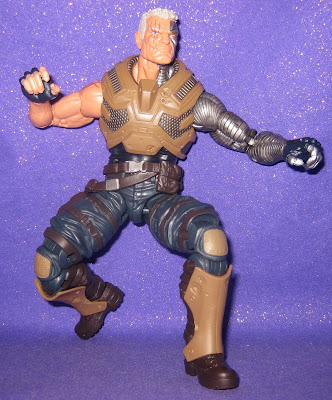 For a Marvel Legends figure this size I would say that Cable’s articulation is commendable. He can achieve plenty of action poses and looks pretty cool no matter what you do with him.
There aren’t any significant limitations on his joints. Even his greaves are a softer plastic and can be pushed up a bit to accommodate his ankle joints.

Cable is a s fun as any other Marvel Legends figure and all of his accessories interact nicely. 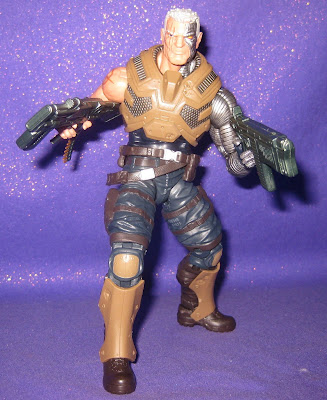 Cable has me the most satisfied I’ve been with a non-MCU Marvel Legends figure in quite some time. It’s a great costume choice executed particularly well. This is one of the times I’d say I don’t see a better version coming anytime soon.