The Most Wuthering Heights Day Ever 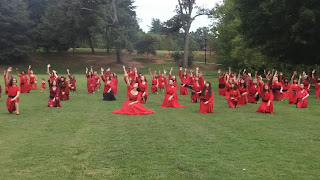 On July 16th the world celebrated The Most Wuthering Heights Day Ever. Groups from 21 cities around the world recreated the iconic Kate Bush video. I'm up for anything fun so, of course, I was there. 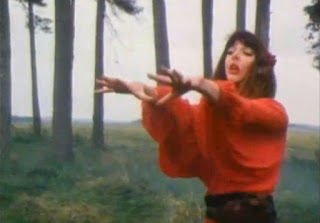 If you have no idea what I'm talking about I'll explain. Back in 1978 a young Kate Bush released a video for her song Wuthering Heights. It was obviously based on the book by the same name, but Bush's song is told from the point of view of Catherine's ghost. That Cathy is dead is not a spoiler since if you've ever stepped foot inside a school (or lived in this world) you should have read the book. The song is great, but the video for it is a bit silly in some places. Kate Bush wears a gauzy red dress, and dances around in a field in front of some misty woods. I use the term dance loosely here because a lot of it is waving, and even more of it is twirling. It might be easier for you to watch it than for me to describe it so here you go. 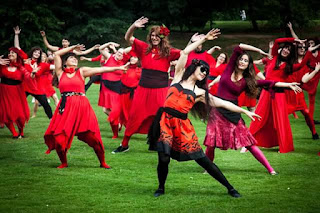 The question of how and why this came about might being going through your head right now. And rightly so because it all sounds a little odd at first. Back in 2013 a performance group called Shambush! did a video recreation in England. It went over well, and so three years later a bunch of other cities decided to join in on the fun. Most of the participating cities were in Australia, the U.K., and Europe, but there were a handful of cities in the U.S. that got involved as well. The Atlanta group was organized by Kim Manning and Sherri Larsen, and they spread the word through social media. My friend Sharron sent the Facebook invite to me, and while I was interested I wasn't interested in doing something like this alone. I love Kate Bush and this song, but goofy things are always more fun with friends. I needn't have worried though. Everyone there was very friendly, and some of the people who did come alone seemed to leave with new friends. Even though I would have ended up being perfectly comfortable by myself Sharron and I donned our red, and headed down to Candler Park at 9:30 Saturday morning with Mr. Tibbs in tow. Do not let my long suffering husband try and convince you that he was dragged to this thing unwillingly though. He was up and ready to go take pictures of us, and enjoy laughing at me trying to dance. I'm not great, and I need to buy a sports bra. 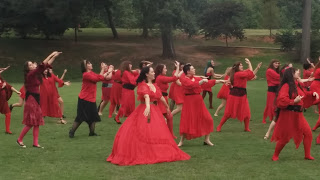 Over 300 people were interested, and according to Facebook 194 people attended. Not everyone who came danced; many just came to view the spectacle. According to the sign-in book there were 60 or so Kates dancing so it was indeed quite a spectacle (although it certainly seemed like more than 60 people from where I was twirling). Imagine sixty-something men, women, and children doing a choreographed dance number in similar red dresses. Or if you'd rather save your imagination for other things you can watch us here. There were several amateur photographers, as well as a few drones, and even a real film crew who were working on a documentary covering all the Wuthering events around the world. The drone footage was neat, and it's here if you want to see that too. At the end of both of these, if you're quick, you can catch a glimpse of Dragon Con game show hostess, and glamorous woman about town Lady Miss Flex. This last video is less than two minutes long just in case you're getting tired of the song by this point. Hopefully you're not, but I know that I've had it go through my head at least once a day in the week that has followed the event. It's catchy, and I heard it A LOT that day (and the practice/drinking we did the night before). 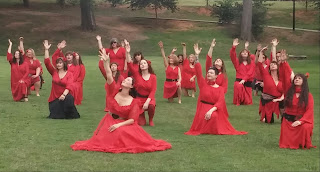 If you look at the first video closely, and care to try, you can see me to the left and behind the girl in enormous fancy red dress (for Sharron fans she's to the left of me in the black skirt, and even though she's half in black her outfit manages to look better than my Old Navy dress). Don't judge my mistakes too harshly though. By the time this video was filmed we had run through the thing probably 4 or 5 times, and we were running out of steam. Even that early in the morning Atlanta is a hot place in July. I also have no grace or any ability to dance in any way (I have tripped over my own feet while completely sober on more than one occasion). Drinking wine and dancing around your friend's living room twelve hours before a public event may not make for the best preparation, but it didn't hurt. And no matter what Mr. Tibbs said we didn't disgrace ourselves too horribly. If they do this again next year I encourage you to attend. The event page is still up on Facebook if you'd like to find out more. Search for "day of wuthering" or "the most wuthering heights day ever", and you'll find all the info you could ever need. You don't have to be super in to Kate Bush to enjoy this. You just have to enjoy fun and/or spinning around in circles. I like both of those things so I'm definitely up for another go next year (after I get a dress that breathes better. I see why the gauze now; spandex/polyester blend should not be your first choice for dancing in the hot sun). Just come watch if nothing else. You can sit with my husband, and mock me, while deep down thinking it's kind of cool. 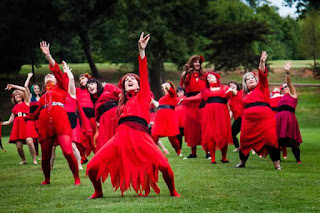 Beth got her start writing for a site called Movie Criticism for the Retarded (which has been reborn as dorkdroppings.com. Check it out sometime), but was pulled out of an early retirement to write for Needless Things. When she isn't writing she plays video games and watches bad horror movies while eagerly awaiting the zombie apocalypse. She may try to save her husband and/or their cats, but luckily hasn't had to make those tough decisions yet.
Posted by bethv at 11:00:00 AM