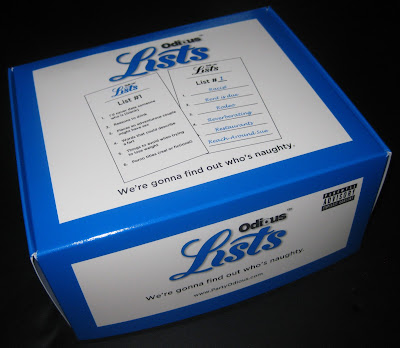 FULL DISCLOSURE: I was contacted by an advertising agency about promoting Odious Lists on Needless Things. I like to think that you guys are aware of my level of integrity, but I’ll still tell you that I wanted to try the game out and make sure it didn’t suck before getting involved in any shilling.

I won’t shill for stuff I don’t believe in, but I will shill the heck out of stuff that I do.
My point here is that I got this game for free for review and potential shilling purposes, so take that into consideration as you read my review.

But also take into consideration the fact that I would’ve wiped my ass with it if it wasn’t any good, regardless of any potential compensation.

Speaking of which, click on any instance of "Odious Lists" in this review to buy as many copies of the game as you like. Needless Things gets a kickback for each purchase you make!

Odious Lists is a group game, so I needed to summon some folks to the Phantom Zone to give it a proper tryout. Joining myself and Mrs. Troublemaker for the event were Arian, Sean, and Mrs. Troublemaker’s friend Emily, who has access to a pool, but is also a relatively nice person, so the pool thing isn’t the only reason we’re friends with her. This group was selected for their unique ability to come over to our house on Sunday afternoon. 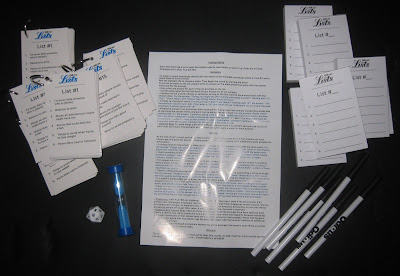 I haven’t played any non-video games in years, so the last thing I wanted from this thing was a box full of pieces and parts and endless paragraphs of confusing rules. Fortunately, Odious Lists consists of six list pads, six sets of lists, six pens, one die, one hourglass timer, and a single page of directions. This stuff is in no way overwhelming and in all honesty anyone with intelligence greater than that of a houseplant could probably figure the game out without any written rules. There are a few minor specificities where scoring is concerned, but it’s all amazingly simple. 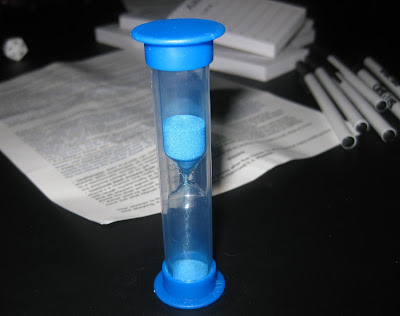 Side Note: This may vary from game to game, but our hourglass sucked, often getting clogged up and stopping without our realizing it. Just use your phone timer.

The basis of the game is this:

Each player gets a set of lists, a pad, and a pen. There are twenty-four lists, each consisting of six prompts such as

“I could never date someone who is (blank)”

You get the idea. Lots of intriguing prompts that lend themselves to racy, controversial, and often hilarious answers. 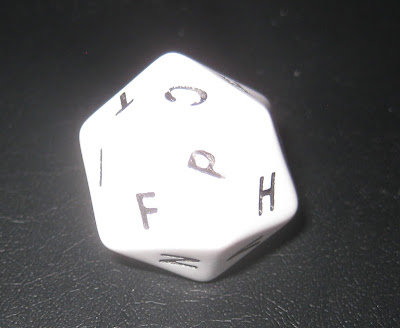 There’s more to it than just regurgitating words onto a numbered piece of paper. At the beginning of each round, whoever is in charge rolls a twenty-sided die (immediately recognized as such by Arian, who has more nerd cred than the rest of us) which has a letter of the alphabet on each side. Whatever letter comes up is the one you have to use to start your answer for each prompt.

If I had any nerd cred I would have looked to see which letters were left out, but I’m not that guy. I just know that “I” and “R” are both present because we got them about five times each.

You get extra points for alliteration or for “big laughs”, which is when the group agrees that an answer was particularly good. That was one thing that I liked a lot about Odious Lists – there was room to play with the rules a bit and it all required good-natured discussion even though we were all competing. There are certain point situations that only go with specific prompts, such as one that goes “I bet one person in the room has a tattoo of (blank)” and you get two extra points if someone does. The letter was “G” and I have a tattoo of Gunnar Hansen (Leatherface), so I got three points for that one. 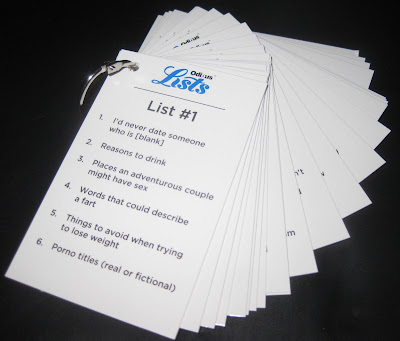 Another strong selling point is that you can play the game for however long you want. It ends when everyone decides it ends and you just tally your points. So if you have half an hour to kill you can just play through a few lists. If you have the whole evening, you can play all twenty-four and even start over again thanks to the alphabet factor. This will keep the game somewhat evergreen, as you’ll constantly be getting different letters for the same lists and having to come up with different answers.

That component is important – replay value. This game has it. Not just from the standpoint of execution, but because the more you play it, the better you are going to get. Odious Lists definitely serves as a sort of brain training tool. You have to think fast and collate a number of factors all at once:

*Is someone else likely to use this answer (you don’t get points if someone else has the same answer as you, which foiled each of us numerous times)?

*And of course the inevitable thought of, “Why the FUCK couldn’t I have gotten this when “C” was the letter!?!”

We had a lot of fun playing Odious Lists. Most of us were drinking moderately and agreed that it was a fine drinking game. The mechanics are easy to understand once you get going and it’s very interactive. And compelling. If you have a good round it makes you anticipate the next and if you have a shitty round it makes you eager to move on. And even shitty rounds are funny. Every once in a while we got a letter/list combo that we all agreed was a dud and that left most of us with a blank prompt or two. We all laughed about it and moved on.

My for-real, honest opinion is that this is a game you should try out at your next social gathering. I think folks that play Cards Against Humanity will see it as a breath of fresh air and that it’s a good entry point for those that maybe don’t play games much. I know it left me not only wanting to play again, but also wanting to try out other games.

It’s fun to hang out with people and to have a directed purpose when doing so. 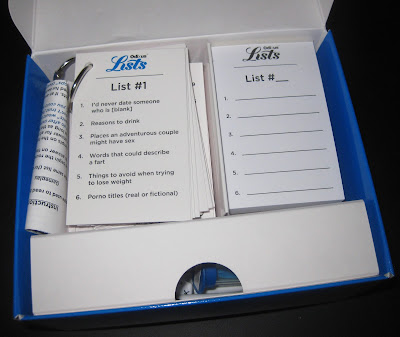 *Sit at a table to play. We sat on a couple of couches and I think it would have been more fun if we were closer.

*Make up your own rules or special conditions for extra points. Be loose with it and don’t be a slave to the rules. It’s fun to come up with stuff like that. You bought the game – do whatever you want. They’re not going to hunt you down for deviating.


*If you’re of age and enjoy a good adult beverage, employ them responsibly while playing. I think getting loosened up will only enhance the experience. And it will let you not take it so seriously. I more than once found myself going for the point rather than the laugh and I wish I hadn’t.

CLICK HERE TO BUY YOUR OWN COPY OF ODIOUS LISTS AND HELP OUT NEEDLESS THINGS! 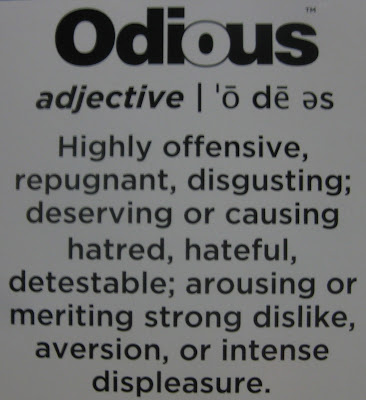