As I was compiling information for my music for 1986 post I realized that many of these songs evoke memories of one of my all-time favorite places – the Jungle Rapids water park in Wilmington, North Carolina. My family is from Wilmington and we would visit frequently during my youth. I called my mother’s father “Papaw” and I don’t think I’ve ever loved anyone more in my life. He passed away when I was a young teenager and I never got to know him as an adult, but there was nothing I looked forward to more than going to visit my grandparents because I knew it meant I would get to spend time with Papaw.

He would take me all over Wilmington while we were there. We’d spend whole days together – just him and me – and they were the best times ever.


More often than not those excursions were toy hunts, which is at least part of the reason for my love of toy collecting today. We’d drive to all of the toy hotspots – Lionel Playworld, BEST, Service Merchandise, Roses, and occasionally even gas stations if my need for a specific toy was urgent enough. More on that later.

I’ve talked about how I’m not a fan of the GI Joe sub-brand Battleforce 2000. Part of it was that the concept was too far afield of the standard Joe military style. Part was that the vehicles were kind of shitty, even if the idea of combining them into a large playset seemed like a good one. Part was that the one bad memory I have of my times with Papaw is attached to the line.

I suppose commercials for Battleforce 2000 were airing and I knew about the new toys. I was desperate to have the figures. I don’t know why because looking at them now they’re not particularly exciting. But I know I wanted them more than I had wanted any other Joe releases. Papaw and I set out on our toy hunt and hit all of the regular spots. Nothing. At one of our stops an older kid asked what I was looking for and I told him. He said that Fast Fair had them. I asked Papaw if we could go to Family Fair.

He said that Fast Fare was a gas station. The kid said they had a spinner rack of GI Joe figures. 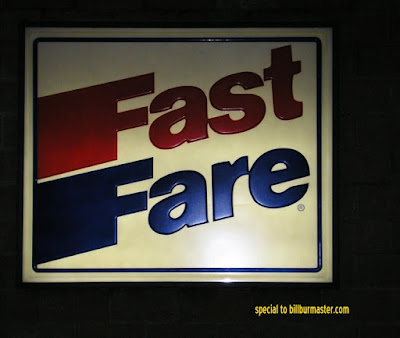 HOLY CRAP. This is the first picture that popped up when I searched and it is of the Fast Fare in Wilmington, NC.

Naturally my grandfather was skeptical of this kid’s information. I would be. We had driven all over town and found nothing. It seemed terribly unlikely that a gas station would have these brand new GI Joe figures that even Service Merchandise did not. And even if Fast Fare had had them at some point, chances were they wouldn’t anymore.

Side Note: People don’t ever talk about it, but Service Merchandise was the place to score new toys. I can picture the toy section of the Wilmington location like it was yesterday and I know a large portion of my purchases were made there. Also, to this day Wilmington gets toys weeks, sometimes months, before Atlanta. I always came back home with jealousy-inspiring finds. I had M.U.S.C.L.E. figures before anyone else.

But Papaw was Papaw and he took me to Fast Fare with the understanding that if they didn’t have any Battleforce 2000 we would head home. We had been out all day and I’m sure he was ready to sit in his recliner and relax.

Sure enough, Fast Fare had Battleforce 2000 figures. And not just a couple, they had all of them. But there was a problem. The figures were more than the standard price. I want to say a lot more, like $7.99 instead of $2.99.  I didn’t know at the time that stuff was always more expensive in drug stores and convenience stores. Papaw was the kindest person ever, but he was always serious about how much money I had to spend. If we had found the Joes at regular retail I think I could’ve gotten four or five, but at Fast Fare’s price I could only get two.

I begged and pleaded and whined, which was unusual for me. I was normally a very polite and well-behaved kid. But I had never come up against Papaw’s iron will before. He had never really had to tell me “no”. I’m sure he was as nice as he could be about it and I think he even said we could go out again the next day, but the thought of leaving those figures that I had to have there on that spinner rack made me crazy. I acted like a brat. I can’t remember now if I even got any of the figures or not.

After that trip, Papaw came home and told either Mom or Granny, “I don’t know who that is, but that’s not my [grandson].” I had been a jerk about it, but hearing that made me feel more hurt and ashamed than anything else that has ever happened in my life.

That wasn’t his intent, obviously. I mean not to upset me that much. He just wanted to make the point that I had been acting poorly. But it was devastating to me. Our relationship was that we were pals that went out and had fun. I had broken our unspoken contract by acting like a jerk.

One of the best feelings I ever had also came from Papaw. I was talking to my mom a couple of years ago about being a dad and about what I wanted for my son and how I tried to treat him. She told me that the way I was with my son reminded her so much of the way that Papaw was and that’s the best thing anyone has ever said to me.

Eventually I ended up with most of the Battleforce 2000 stuff, but I never really enjoyed it. It wasn’t too long after that that my interest in GI Joe waned and I moved on to other things. Like I said above, that was more due to the changes in the style of the Joe line than anything else, but that memory haunts me to this day.

I’ve got plenty of other stories to share about my grandfather and this is literally the only painful one. That just seems to be how the human brain works, right? The bad stuff jumps to the front.


Stay tuned for future Papaw tales of haunted ships, iron on t-shirt stores, boardwalks, and the Alamo!
Posted by Phantom Troublemaker at 11:00:00 AM