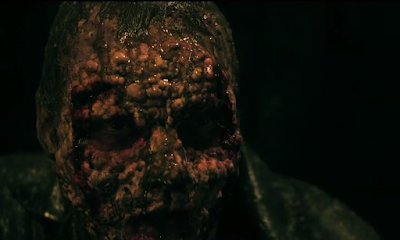 You see the title. It's not a metaphor. But if you're thinking Toxic Avenger, think again. There's not a whole lot of laughs waiting for you here, only pain and suffering. As the tagline of the movie says, "shit just got surreal".


Most horror films rely on blood and gore to induce cringes in its audience, but this film experiments with other body fluids. If you have issues with human excrement I suggest finding other reading material and definitely another movie.

First of all I would just like to thank the brave men and women who wallow in our filth for a living. They do the worst of jobs and go by mostly unseen. Those days when I'm in toe curling anguish on the toilet with teeth clenched and cold sweat dripping off my face, I flush and think that the worst is over but it has just begun. Whether it's a log flume or an oil spill day, it all goes down the drain to congregate with the urine and feces of every person around me.

Soggy fragments of brown stained toilet paper brush up against lumpy turds as they flow down a yellow river beneath our feet. It sounds like an absolute nightmare that very few could stomach. But people do and they they are extremely unappreciated in my opinion. Today's film pays proper homage to one of the dirtiest jobs on earth. He's an unseen hero, he is....

Just so you have an idea of what kind of style to expect, the script was written by Tony Burgess who is known for Pontypool. Pontypool was a pretty good little horror flick with an original take on zombies that you should check out if you haven't. Jesse Thomas Kirk directs the film and is known previously for Monster Brawl, which I have yet to see.

The opening scene may be the point where you hit the stop button and try to find something else to watch. At least, that's what a normal person would do. I, however, found it to be very appealing and I couldn't wait to see how crazy the rest of the film was going to be. I've seen 2 Girls 1 Cup twice so it's going to take a little more effort to run me off. 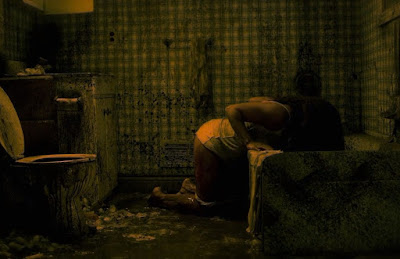 The film opens with a random woman crying and barfing all over the place. As the camera pulls back you can hear a bit of flatulence and see her straddling a toilet. With filth coming out of both ends of her body she falls over in the floor which has already been splattered with diarrhea. She writhes around on the floor spitting bile out of her ass and gagging. I started to wonder why she was even sitting on the toilet, because every inch of the bathroom was drenched in body fluids. The toilet seat itself even had a thick layer of butt mud on it. Anyways, she ends up dying from what appears to be an extremely brutal form of dysentery.

The plot unfolds and we find out that the water supply to the town has been contaminated and it's causing a horrific illness to spread across the community. The mayor sends someone out to enlist the services of Jack, the Septic Man, to go down into the sewers to find the cause of it all.

Jack is apprehensive at first due to the danger involved. His wife is pregnant and is due any day. The last thing he wants is for something bad to happen and miss out on his future family. But a big bag of money is a good game changer. He takes the job even though his wife objects.

After descending into the sewer system he finds his way to the septic tank where he finds the root of the problem. A string of dead bodies starts flowing out of the large pipe. These rotting corpses are seeping who knows what into the water.

He ends up trapped down inside and things go south from there. Stuck inside that cesspool for days or maybe weeks, he starts to transform due to exposure to the diseased conditions. It was horrible to see his open wounds submerged in raw sewage and it actually made me curl my lip a little.

It's a very slow paced film and there's really not much of a story to it. Guy gets stuck in the sewer, guy turns into a freak. That's basically all there is to it. He has a run in with some weirdo brothers who live in the sewer. One of them keeps his teeth sharpened and the other is a giant. I didn't even recognize the giant as Kurrgan from WWF in the 90s.  He looks completely different.

My hopes went up after that first scene but sort of declined as the movie went on. It's not a bad movie by any means, it's just missing something. It's a serious story despite how it looks and what the title suggests. The film style was great, acting was decent, and the makeup effects were effective.

It's really hard to pinpoint exactly where this movie fell short. Maybe the opening scene set expectations too high. Whatever it was it made what could've been a cult classic just another average body horror flick. IMDB has it pegged at a 4.3. I'm assuming there's a lot of people who can't handle their shit. Well I can so I'm giving this movie an even 6.0.

That's it for this edition of Devlin's Domain. Come back next time and I'll be taking a look at a film by Larry Clark.