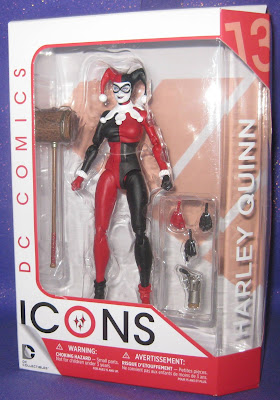 As much as I’ve been loving DC Collectibles’ Icons line, it’s not one that I am going to collect regularly. I think they’re doing all the right things, but with a huge collection of Mattel’s (admittedly inferior) DC Universe Classics on my wall I can’t justify buying new versions of the DC characters unless they’re from Mezco’s One:12 Collective, which I’m considering to be definitive action figures. Hopefully those will be the last ones I buy of those characters.

But there are special cases where I’ll pick up a figure because I like the character and just want to have a bunch of action figures of them. I own tons of Batmans and Boba Fetts and I’m well on my way to having a shelf of Harley Quinns.


I loved Batman and Deadman from the Icons line. The Deadman is by far the best action figure of that character that I own. Batman would be if not for the One:12 Dark Knight Returns figure. And to be fair, the Icons Batman is a modern version and is a costume that I prefer. So for the money, it is still an excellent Batman. If you can’t justify paying seventy-plus bucks for a twelfth scale figure – and believe me, I understand if you can’t – Icons Batman is your guy.

I was excited about this Harley because we don’t see very many traditional Harley Quinn action figures. I’m okay with that because I feel like Harley is a character that works in many different iterations, but it’s nice to see the more classic, spandex-clad Quinn.

I was also excited to see how DC Collectibles handled their first female Icon. Technically Atomica was released at the same time, but I’m not even familiar with that character. I mean, beyond knowing that she’s an Atom legacy character.

Each of these figures has looked even better in person than they have in online production photos. I’ll get into the details below, but as soon as I saw the figure I was blown away. It’s hard to make bodysuits interesting, but DCC has done it.

DC has done away with any kind of biographical information other than a note about where the figure’s look comes from. I know it shouldn’t matter to me since almost all of my toy packaging goes in the trash, but I miss that stuff. I suppose eliminating it means they don’t have to pay someone to write copy.

The box does include one of my favorite things about DC Collectibles – creator credits. To me this is the most important thing other than the figure’s name.

You can’t tell in any of my pictures because the flash on my camera washed out Harley’s white face, but she has a fantastic face sculpt. It’s very human and not exaggerated like many Harleys. That’s one of the trademarks of this line – human proportions and features. But not in a boring way. To me it is very interesting to see how the creative teams can produce these realistic sculpts while maintaining the comic book-y, superheroic aspects of these characters. It’s kind of like the Arkham games, but everybody doesn’t have armor plating.

Harley’s hat looks like it’s supposed to. The proportions are nice and the pom-poms are sized nicely and have sculpted detail. Her mask is sculpted and raised off of her face.
Another trademark of this line seems to be that “just paint” is never good enough. More on that in a minute. The makeup on the figure is incredible. Her eyeshadow is smoky and natural looking. The lip gloss is shiny. The paint on her eyes is just amazing.

The collar is a separately sculpted piece of soft plastic. As such, it looks great and sits nicely on the figure. The fact that it isn’t part of the torso sculpt adds a lot of depth and adds to the perception of this being a higher quality figure.

All of the color differences on the harlequin suit are sculpted seams. Not just the body, but the neck and the head, as well. This was one of the most impressive things about the figure. It would have been easy enough for DCC to decide that the color differences were enough, but these seams add so much to the profile. Additionally, Harley’s proportions are very athletic and feel right for the character. She doesn’t have huge boobs or an outrageously defined butt or anything. Again – very human. I also like that her musculature isn’t overdone. She looks like she’s wearing a costume as opposed to body paint.

There are a few bits of decorative paint on Harley’s costume – the traditional diamond patterns associated with the harlequin. These are all cleanly applied and opaque. The black or red beneath them don’t show through. The ruffles at the ends of her sleeves have intricate sculpts and her gloves have those little Mickey Mouse glove lines on the back. It’s a subtle but nice touch that make them look like more than just painted hands.

Harley’s shoes are low-topped boots with folded tops. They look great and the paint between them and the legs is clean – no splotching or bleeding.

Harley comes with an instruction sheet, a hammer, three extra hands, and a pop gun.

The hands are posed in various ways to interact with the other accessories. They switch out easily and look great.

The hammer is an old school wooden mallet rather than the red and silver one we’ve seen in recent releases. The wood grain sculpt is wonderful and is enhanced by a fantastic paint job. From the metal bands around the head to the wrappings on the handle, this is an outstanding accessory. Plus, it fits perfectly into the included hands and doesn’t slide around or anything.

The gun just looks fun. It’s a ridiculously exaggerated revolver with a giant cork in the end. Like the hammer, the sculpt and paint are excellent. It fits into the appropriate hand and looks right, meaning it doesn’t sag or look limp in the figure’s hand.

Harley has tons of joints and most of them work better than I expected.

Since the points I made about the Deadman figure also apply to Harley, here they are again:

I wish Harley’s head had a bit more range. It’s okay side-to-side, but doesn’t look up and down very much. I hope they found a better joint for the Superman figure.

The upper abdominal joint has a much better range than the Deadman and Batman figures.
The hips are the main ones I was referring to that work better than they look. Some kind of swivel somewhere on the leg would be nice, but I get that it would mess up the aesthetics. I respect that DCC are giving us all the joints they can without making these look totally janky like some import figures do.

This Harley Quinn definitely gets my recommendation. Do note that it’s strict 6” scale and not like DC Collectibles’ other releases. I’m a big fan of the decision to produce the Icons line this way. To me, these releases look all the better for having a specific scale relative to one another. I always prefer that in my action figure lines.

Anyway, if you’re a fan of Harley or just of great action figures, this one is for you. Pick one up while you can. We probably won’t see too many classic Harleys.