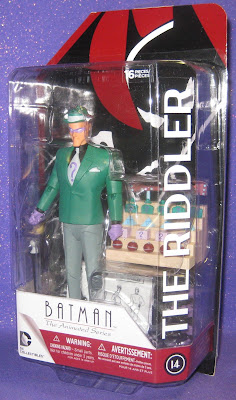 Hey? Do we even do toy reviews anymore?

I’ve cut way back on what I’m buying and to a certain extent have lost interest in some lines. DC Collectibles’ animated line might be one of them. I outlined some of my issues here, but what it’s coming down to is that toys are getting so expensive that I’m having to choose between them and actual real-life stuff. And toys simply can’t win that competition.

I sold a number of Masters of the Universe Classics figures that weren’t central characters that I felt I had to have and it felt great. It still feels great. And I think I’m going to redefine what “have to have” means and sell some more. There’s a good chance my DC Animated collection is going to end up on the chopping block, as well. The DC Animated Universe represents my favorite versions of these characters, but I haven’t been crazy about some of the design decisions from the start and the way that DCC is packing and selling some of the items is really turning me off. Just like comic books, once a toy line starts forcing me to buy things I don’t want or already own, it’s probably time to call it quits.


Now that I’ve gotten that negative opening out of the way, it’s time to talk about a character I love – Edward Nygma, The Riddler!

Over the course of my life I’ve gone back and forth over whether I prefer suit Riddler or tights Riddler. Right now I’m pro-tights, but when Batman: The Animated Series was on the air I was a suit guy. Which is fortunate because that’s what he’s wearing. As opposed to this: 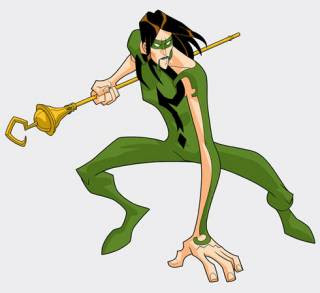 I don’t know why the let someone from DeviantArt design Riddler for The Batman (which, by the way, is on Netflix right now and is excellent).

Even though Riddler is just a Guy In A Suit(™Schweck), he’s still one of the more fun-to-look-at figures from this line. Nygma has one of the more distinct and expressive faces from Batman’s rogues gallery and DCC has captured it here. Thanks to the original design being more than just an all-green suit, there’s a lot of color to look at. 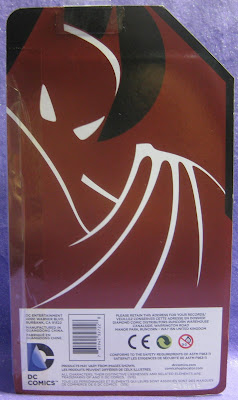 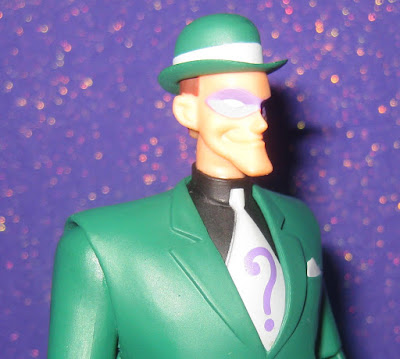 It’s not often I get an action figure that is immediately recognizable as a smug asshole, but DCC has nailed it with this guy. His expression is perfect. As far as his looks, this animated Edward could pass for a caricature of Frank Gorshin. That’s great, because even though Gorshin’s Riddler was a bit off-spec personality-wise, he looked the part and was still an amazing villain. The animated Riddler nailed both aspects. 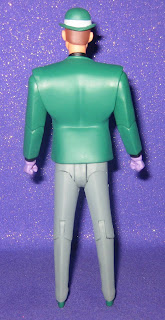 Riddler’s hat is separately sculpted but not removable because there’s really no need for it to be. I’d rather have a permanent hat that looks great than a functional hat that’s either too big or result’s in the figure’s head being too small. The paint apps on the head are tight. The colors are solid and vibrant and everything is applied where it should be with no slop. 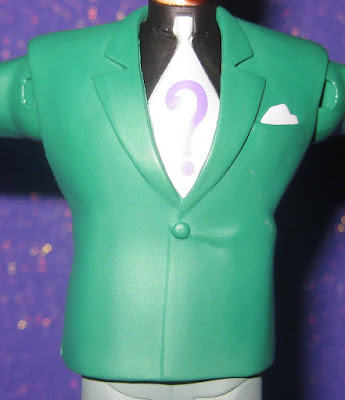 The figure’s torso is made up of a base with a sculpted shirt and tie. That is covered by a rubber or soft plastic jacket. The sculpt on this piece is excellent, with a well-defined button and lapels. The shape is perfect, with just a few subtle folds. The holes in the arms are tight enough that you don’t see the torso underneath and the sides are designed in such a way that the figure’s arms can hang straight down. 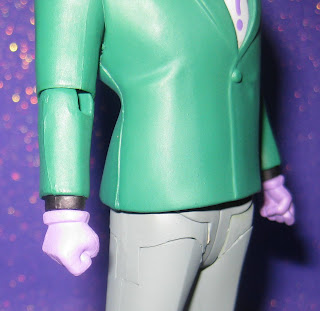 The arms match the jacket piece perfectly in both color and texture. The black shirt sleeves sticking out of the jacket are a nice touch. The gloved hands look great. 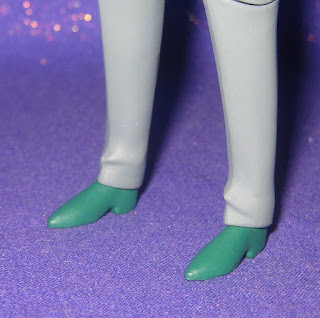 Riddler’s trousers are neat and have a great profile under his bulky upper body. He’s slimmer than the other Guys In Suits. His little green shoes are pointy and simple. One of the benefits (for DCC) of this style is that there are lots of plain colors with no shading or detail. In any other line these shoes would be disappointing, but here they’re perfect. 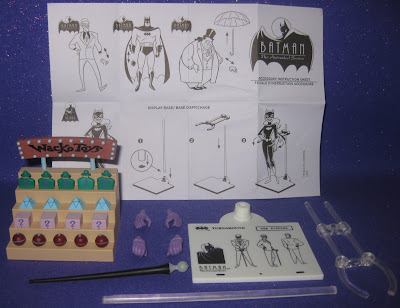 Riddler comes with four extra hands, a stand, a cane, and a huge display of Wacko Toys. 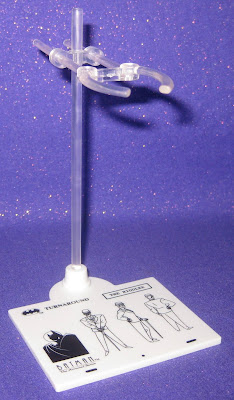 The stand is just like all of the others from this line – at first charming and impressive, but as the shelf fills up just too damned big. And I still wish the bases weren’t white. 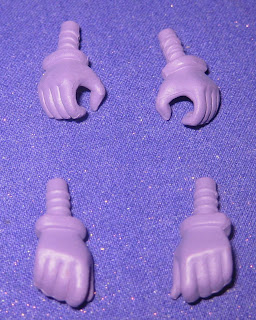 The extra hands look great. They switch out easily. These aren’t hinged like most of the others in the line. It’s a bit of a letdown, but not a huge deal. 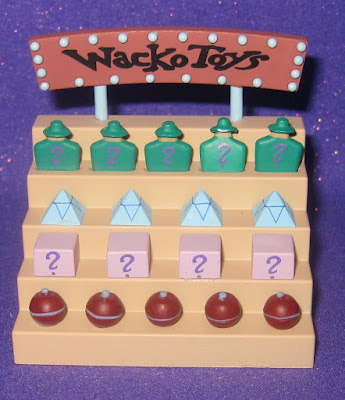 The Wacko Toys display is awesome and one of the biggest accessories from this line (unless you count Roxy Rocket’s rocket). I kind of wish the puzzles were removable, but I also wouldn’t want to keep up with eighteen little doo-dads. Maybe just one that Riddler could hand to Robin. Otherwise it looks fantastic. The paint and sculpted detail are phenomenal. This is one of the more impressive accessories in my collection.

Riddler’s cane looks like Riddler’s cane. It fits snugly into one of the included hands and looks great. Also, it’s firm plastic and isn’t warped – a miracle for a modern toy. 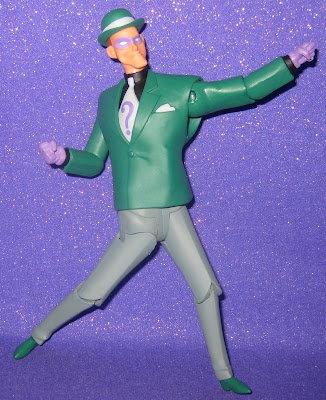 I’m sure you guys are never going to get tired of me talking about how much I hate the hip joints on these figures, especially after dealing with them across three separate lines (Doctor Who, DC Universe Classics, and this one). But they’re ugly and they don’t even provide enough range to be worth being so ugly. Riddler’s legs have very little forward-and-back range. This figure couldn’t sit down if you needed it to.

The shoulders are fantastic, though. For a Guy In A Suit, his arms have a tremendous range. The elbows aren’t as good, but they are at least swivel pivots. 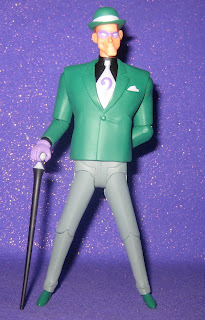 Unlike Harley Quinn, this version of Riddler doesn’t do much more than stand around looking smug. And this figure accomplishes that nicely. The bevvy of accessories make him fun, too, though there’s not much to do with the toy display other than marvel at how big and detailed it is. 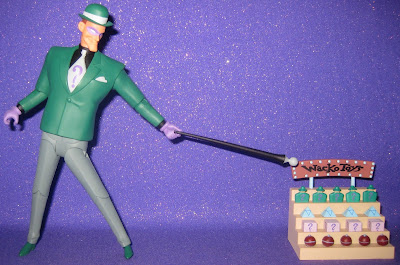 The figure doesn’t blow me away, but it is a darn fine Riddler. I think my growing disenchantment with the line is more responsible for my lack of enthusiasm than anything about the figure. It’s a great Riddler and if you’re collecting DC Collectibles’ animated line or even if you’re just a fan of Riddler, I recommend it.

Buy from Amazon and help Needless Things pay the bills!: