Movie Review – Phantom on The Conjuring 2 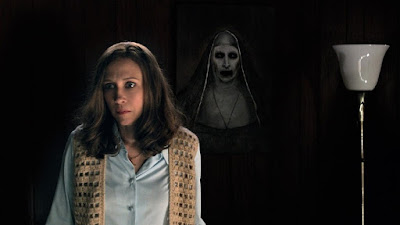 I thoroughly enjoyed The Conjuring. It was a classic haunted house flick that was told through the eyes of the paranormal investigators rather than the victims. Not only that, extra care was taken to establish all of the characters in the movie, particularly Ed and Lorraine Warren, the investigating couple played by Patrick Wilson and Vera Farmiga. It was the character work more than anything that won me over. While the film had its share of scares and was very well done, my investment in the people on screen is what truly made The Conjuring rise above other horror fare. Director James Wan made great use of all of the tools at his disposal, but relying on Wilson and Farmiga was the smartest decision.

Horror sequels are pretty hit-or-miss, with much more of the latter. But this franchise was in a special place where it had not only returning leads but a returning director, as well. I felt like as long as there was a solid story, the Conjuring 2 had to be a win.

If you don’t know, the Warrens are a married couple who were real-life paranormal investigators. They were involved with many of the highest-profile cases of the last century, including several that have been adapted into books and films like The Amityville Horror.

That very case is where the first movie ended, with mention of happenings in Long Island. The sequel picks up at the tail end of the events of Amityville, a reasonable decision given the amount of coverage – and debunking – that case has already received. Instead, The Conjuring 2 dramatizes the Warrens’ involvement with another famous haunting, the Enfield poltergeist.

I didn’t know anything about the Enfield case going into the movie, so take that into consideration. My wife knew all about and has actually researched it quite a bit, and she didn’t seem to enjoy the movie as much as I did. So keep that in mind.

As to how much I enjoyed The Conjuring 2; I loved it with one glaring exception, which I’ll get to in the “Spoilers” section.

This is a classy, top-notch horror film. The performances are superb. From Wilson and Farmiga’s now comfortable portrayal of the Warrens to the supporting investigators played by Simon McBurney and Franka Potente, we get to empathize with the active protagonists thanks to some well-crafted character moments and excellent casting.

The victims – the Hodgson family – are also the recipients of solid casting and smart character work. We get to know them just enough to like them before things start going horribly, terribly wrong. The filmmakers are very savvy about how much time to spend on these people and how to use shorthand to build a connection with the audience. Not one moment feels wasted or needlessly drawn out.

I liked the way that a standard poltergeist story was handled. There were a few twists and turns, with the special circumstances that the dramatization of the Warrens’ involvement brought along. There were spots where well-known and loved horror tropes were utilized to great effect, as well as other events that defied expectations. There’s one scene at the height of the Warrens’ investigation that I actually found difficult to look at. I’m not talking about the “glancing at the bottom of the screen” thing you do while anticipating a scary moment – I’m talking about a genuinely disturbing and haunting image that even now is making the skin crawl up my spine.

The audience may or may not be aware of the general debunking of the Amityville and Enfield cases, but the film smartly addresses such things head-on. There are a couple of scenes explicitly designed to give the audience that extra bit of suspension of disbelief if it is needed. For me it isn’t. “Based Upon A Ture Story” or not, I tend to be able to adapt to whatever stretches of credulity movies ask of me, as long as their internal logic is consistent. And The Conjuring 2 is airtight. Mostly.

My spoiler-free recommendation is that you see this in the theater ASAP. If you don’t know the Enfield case, don’t look into it. If you do, it may or may not have an effect on your enjoyment, depending on your level of skepticism and what you expect from a dramatization of a real event.

One of the most chilling elements from the trailer for The Conjuring 2 is a zoetrope featuring a character called the Crooked Man from an English nursery rhyme:

It was, unfortunately, also the source of what I thought was the movie’s only failure.

One of the key elements of success for the Conjuring franchise is the reserved use of CGI. Most of the effects are achieved practically, or with mild CGI enhancement. But in this sequel, we have a fully CGI character in the Crooked Man and it took me right out of the movie. Admittedly, the scenes in which he was used were frightening, but they ultimately failed because the character was so painfully obvious amongst these wonderful performances and otherwise solid effects.

The worst thing about it is that the Crooked Man was in no way integral to the plot. He was essentially shoehorned in to give the Warrens another creepy item to add to their collection back home.

UPDATE!: I was wrong. The Crooked Man is not CGI. Check out this article on 6'7", 100 pound actor Javier Botet, who played the character. But I still maintain that the look of the Crooked Man went against the style of the movie and was, ultimately, overly gimmicky. And I don't feel too bad because plenty of other reviewers reacted the way that I did. Something was off.

Otherwise the film is fantastic. James Wan knows horror well, and he knows what we want to see. As good as the character work and story were, it’s the pacing that I think is the most important of Wan’s tools. He knows how to build up intensity, and how to deliver at the crescendo. There’s a scare early on involving Bob Wilkins, the spirit that appears to be possessing the youngest daughter of the Hodgson family. The scene that leads up to our first – and second – glimpse of him is almost torturous in its intensity. We as the audience know what is coming, yet Wan plays with those expectations to deliver two slid jumps for one.

One of the biggest story elements of the movie is the fact that the Enfield poltergeist is largely seen as a hoax. The ideas of hoaxes and public perception are addressed early in the movie by way of the Warrens appearing on a talk show opposite a skeptic. Ed explains that things can be faked and that evidence can appear sketchy, but that if you weren’t there, you don’t understand. That supernatural occurrences have an atmosphere that can’t be explained or understood. It’s a nice, simple way to put the audience in the right frame of mind if they’re skeptical or already aware of these cases.

There’s another scene with a priest who is very clear about the church’s stance on taking action and how conscious the institution is of public perception. He tells the Warrens that the church cannot be seen to be involved with an kind of hoax or false events. This is why the Warrens are sent to investigate Enfield. The scene doubled as a story point and as a justification.

For their part, the Warrens in this film are still dealing with themes established in The Conjuring. The weight of what they do is heavy and dealing with demons and spirits has left its mark. Their love and their faith keeps them strong, but there is once again discussion that they might need to stop what they’re doing for their own benefit. Ed once again maintains that they if are the only ones that can help people, they have an obligation to do so.

The Hodgsons are portrayed as a loving and tight-knit family dealing with a recent upheaval – the father left them for another family. The two boys and two girls are all likable and not the standard annoying movie children. The mother, Peggy, is sympathetic and loving.
Frances O’Conner plays the role of matriarch quite well. She’s tough, but also vulnerable enough to be a sympathetic character when things go so bad. You can see her cracking up as the movie goes on and it’s heartbreaking. Ed Warren points out that times of emotional distress and hardship are often when forces from beyond will strike because that’s when we’re at our most vulnerable and susceptible to outside influence. It’s a sinister message and one that helps to propel the plot.

The superstar of the movie is Madison Wolfe as Janet Hodgson, the youngest daughter and the focus of the spirit’s malevolent intent. As the movie goes on, you can see her breaking. The story is of Janet being worn down by both the supernatural events and the resulting attention her family receives. Her transformation from the fun, confident girl we see at the beginning of the movie into the fragile, shell-shocked child she has become at the end is amazing. Wolfe delivers on the most critical performance of the film, as the drama relies on her delivery.

A few notes for people who might read this who have already seen the movie, or things to remember for those of you planning to see it:

1 - I could never live in a house with that awkwardly placed window by the stairs. I thought for sure it would be utilized for a creepy scene, but it never was. Nevertheless, it made me uneasy every time it was on the screen.

4 – Oddly it didn’t bother me as much as the window, but fuck that basement, too. Holy shit. Me and the missus both thought something much creepier than what happened was going to happen down there, but what happened was certainly creepy enough.

One last thing I particularly loved about the Conjuring 2 was the way in which the supernatural events manifested. This evil entity did not give a fuck. Very early on it just starts acting up right in front of a pair of cops. As more investigators are brought in it has no trouble obliging them by manifesting in terrifying and violent ways. It’s only when the Warrens arrive that it starts to behave differently, and this is all an aspect of the plot and the entities’ motivation. But I loved that we didn’t have the stereotypical scenario of the parent not believing and then the neighbors not believing and so on and so forth. This movie gets right down to business and I dug it for that.


This one is highly recommended. Go see it and let’s hope for a third. James Wan has said that if a second sequel happens (which it certainly will given The Conjuring 2’s box office dominance this past weekend), he might not be able to direct. We all need to hope that his schedule works out or that New Line throws money at him because I think this franchise needs him. He has a specific vision and a remarkable skillset for horror. Plus, we all know what happened with Annabelle (it sucked).