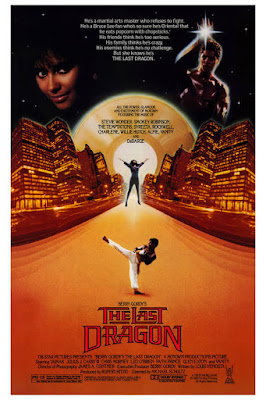 I...can't...hear...you...
If a movie sticks in your brain-pan, sits in your DVD collection, and is one you break out regularly (like once a month at minimum regularly,) then it's a legend. If it's a family favorite that everyone in your house enjoys, quotes all the same parts for, and laughs at the same moments every time they watch it, then it is celluloid gold. If your movie has 80's music full of R&B/Hip Hop Motown glory, the Shogun of Harlem, plenty of martial arts, campy plot twisting, and the gorgeous Vanity, then it fits such descriptions. Berry Gordy's The Last Dragon is without a doubt one of the more campy movies that bombed in the 80's, but I have found that the movies that bomb are usually household favorites for my family. This movie just happens to be number one on our re-watch list and for very good reason. The Last Dragon is by far and away one of the best movies ever created. It is "The Master." 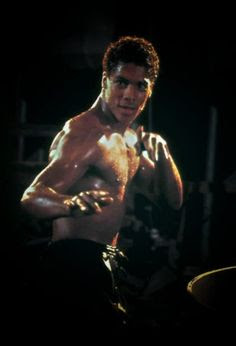 Let us go over the movie's basics first. Our adorably naive hero, Leroy Green, should be your average 80's Harlem boy, given his family and background. His parents are normal, his little brother is as 80's as they come. Leroy, however, long ago devoted his life to the Chinese lifestyle. Training in Gung Fu (Americans call it Kung Fu, but I'm a purist. Gung Fu is the traditional spelling and pronunciation,) Leroy also devotes himself to most of the Asian way of life in terms of tradition and spiritualism. Forgoing most American lifestyles, he trains in the martial arts daily. The one American vice he gives himself is watching (and re-watching over and over) all of Bruce Lee's movies...his absolute idol. The goal of Leroy's training, according to his Master, is to reach the Final Level. This means you have become the best and most skilled martial artist in existence, which can be confirmed by the appearance of a golden glow around the person's body. Leroy spends the movie searching for the Master that can teach him this Final Level when his Master tells him he had taught him all that he can, and their journey has reached its end. 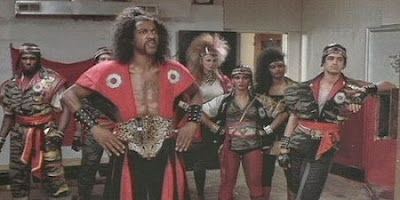 Sounds simple, right? Doesn't sound campy; sounds like any other martial arts flick that you've ever seen. Oh, but this is where the awesome cheese-factor gets extra gooey. Throw in video game mogul Eddie Arcadian, who wants to make his girlfriend (whose voice would give the chick from Bound and Coming To America a run for her money) a pop singer. Throw in great 80's music left, right, and center. Add the gorgeous Laura Charles (played by 80's icon and Prince protégé', Vanity,) whom Arcadian keeps making the Damsel in Distress in an effort to use her V-Jay status to launch his girlfriend's music career. And cap it off with Sho'Nuff, the Shogun of Harlem. This afro sporting, 80's decked out, Gi wearing, Harlem martial artist, feels that Leroy is not only his greatest threat, but the martial arts biggest lie, as he believes that he is the real Master. Plut it all in a blender, mix and bake at whatever temperature an 80's dance club like the one the movie takes place in gets to with that many bodies in a room, and you have The Last Dragon. You won't stop at just one helping of this ooey-gooey cheese fest. You'll go for seconds, thirds, fourths, and more. 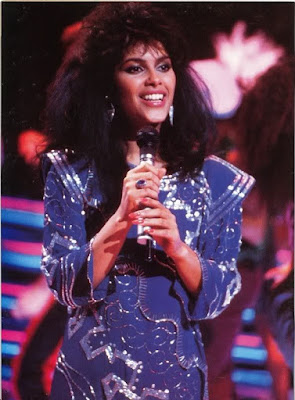 I would be remiss if I didn't address the fact that yes, there are cringe-worthy aspects. Let us get those out of the way before we dive into everything that makes this movie worth it. The main villain, Eddie Arcadian, is more a psychotic that has to hire his own goons to solve the problem. But hey...crazy is creepy and that can be good. Sho' Nuff comes off as the more intimidating threat due to the fact that Eddie has more of the feel of a lower level minion or even a 30's New York gangster. Possibly an Al Pachino Cab Driver type going around saying "Are you talking to me?" Eddie is a video game mogul (I think the last name gave it away) whose seemingly naive girlfriend Angie has aspirations of being a pop singer. Eddie's drive to expand his empire leads him to first ask Laura Charles (Vanity) to play his girl's music video on her show, and then demand it by kidnapping her when she refuses. Angie is a character that, while essential to why he attacks Laura in the first place, is enough to make anyone scream in agony. Her voice is a cross between little girl tweeting and Fran Dreschur nasal...when singing and when speaking. Watching her music video makes you want to hug poor Laura and feel as if you are being held hostage right along with her, being forced to watch the same visual horror. There is a reason that at one point they have to physically force her to look at the screen; you will want to turn away too. There is also Leroy's little brother, Richie. He brings normalcy to Leroy's life, but easily grates your nerves with being such a typical tween punk. Anyone with a sibling, especially a younger one, will recognize the almost aneurism-like sensation that they feel whenever Richie starts on a tangent. Then they will think "I think I'll go kick my brother/sister's butt today..." 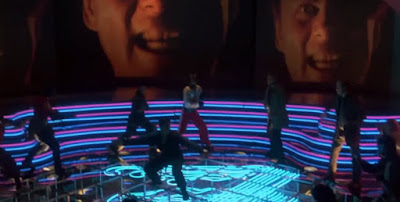 Get around those bits however, and you can enjoy the campy goodness within.

A martial arts master trudging through the streets of Harlem looking for the one person to teach him to be the ultimate in the universe. That alone is just golden. Leroy gets sidetracked, however, when he has to save Laura from Arcadian's thugs- repeatedly- as the mogul attempts to force her to play his girlfriend's music video on her V-Jay hour. Add this story, Leroy's personal journey, the brewing love between Leroy and Laura, and the need of Sho' Nuff to decimate Leroy at every other turn, and you have one very busy movie. The amazing thing is that all of these sub-plots weave together. They all find their way onto the same episodic freeway, interweaving into each other's paths as if meant to be because hey, they were meant to be. By the finale of the film each plot has come together in one grandiose explosion of a super-story that will leave every watcher supremely satisfied. 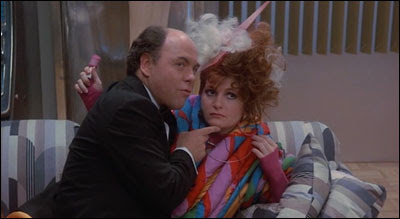 This movie was engineered by Motown music mogul Berry Gordy, who for decades couldn't bring in a new artist or create a new song without it turning to solid gold. The movie, as a result, was not a regular martial arts flick. It's an R&B, uptown funk-filled journey of 80's style grooves that range from DeBarge to Charlene to songs by Vanity herself. There are martial arts fight sequences that are very cheesy, but as some are meant to be that way I take them for the fun that they are. Yet, when you have an epic martial arts battle between good and evil in the middle of an 80's dance club, complete with neon lights in the floor and walls and wide-screen tv's behind the combatants playing music videos during the entire fight? I'm sorry, how can you not choke down gallons of popcorn with a huge grin on your face while challenging your inner 80's Billy Idol and start screaming "More more more?"

The soundtrack as I mentioned above is worth playing over and over. Vanity's tribute to her club "7th Heaven" is raspy and fierce and at the same time utterly playful. Willie Hutch's "The Glow" is full of beautiful 80's synth beats and that gorgeous 80's hip-hop feel that would make even the laziest athlete want to get up and start working out again. For me the highlight was DeBarge's "Rhythm of The Night." That song is one my three favorite songs in history. Not from that decade, but in literal history. I smile and feel better about life every time I hear it and to see its music video featured in the movie as well just makes me all kinds of giddy every time I watch this flick. I feel like a kid again. 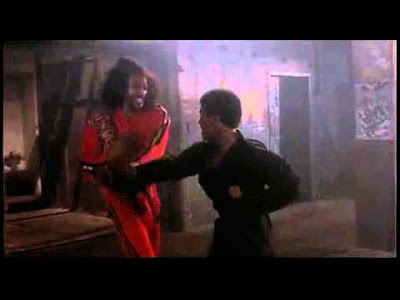 I wish I could say that there was something about it that I don't like. I just can't. Even the things about it that are horrible make it wonderful because they add to the essential cheese factor that increase that gorgeous campy-ness. One can't live without campy movies and it gets no more campy than a lone warrior's search for love and honor while set to 80's music with a ditzy bad-guy and his girlfriend in the background. If you haven't jumped headfirst into this movie than I pray you make the time. Hastings sells it so hit your local store and snag it. If you have seen it then go watch it again. You can never have enough of it.