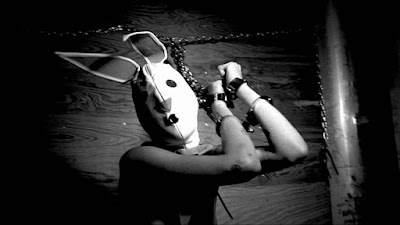 
I'm not sure what it is about these kinds of films that appeals to me. Maybe I'm so desensitized from watching horror movies for so long that I need something extreme to make me feel anything. Even when I do come across some shock films they don't seem to shock me very much. My desire to be emotionally wrecked and disturbed has led me to some very bizarre things just like today's film. Usually when I discover these types of films I can usually find a bit of entertainment in them. Not so lucky this time.

A guy I used to work with, who happened to be a big film geek as well, asked me if I had heard about this crazy movie one day. I pulled up the trailer on YouTube to take a gander at what diseased celluloid rubbish I may be missing out on. Turns out the trailer is definitely not safe for work. It's not safe for a lot of places actually. The little that I saw got me very excited so I finished watching the trailer at home. It was pure madness, filmed in black and white, and full of torture and rage.

Of course I couldn't find this movie on Netflix or Redbox. It wasn't playing in any theaters. The harder something is to find the more interested I get. So I finally caved and bought a Bluray copy of the film off Amazon. I'm not sure if it was a mistake, because I did get to watch it finally and it is pretty strange. Good or bad, I really like having obscure things in my collection. It is a movie that will be collecting dust until someone decides they are curious about it for some reason. I pity the fool that wants to play....

This film was released in 2010 and was the first feature length film directed by Adam Rehmeier. He wrote the script with the lead actress, Rodleen Getsic. Rodleen also acted as producer and claims the story was inspired by her real life experiences. That brings up quite a lot of questions given the occupation of the lead character and the extreme nature of her experience.

Rodleen plays a prostitute listed in the credits as Bunny. The very first scene is of her getting on her knees to perform oral sex on one of her johns. They really set the tone with the first scene, because it doesn't cut away and the scene is not simulated. This leads me to believe that this may have actually been her previous occupation in real life. The actress claims to have been abducted and abused several times so that's a safe assumption. You don't really hear much about non-prostitutes getting abducted repeatedly. 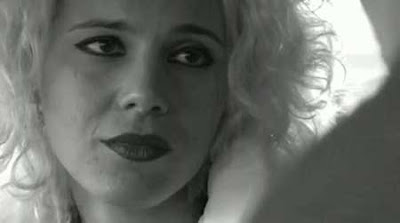 We follow Bunny around and get a glimpse of her lifestyle. She goes around offering sex for money so she can pay for drugs and a motel to sleep in. It's a vicious cycle and not every day goes smoothly. 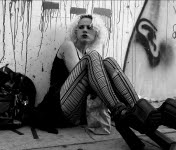 She eventually comes across a truck driver who makes her a great offer. It's pretty obvious he's a total creep but she sticks around. He ends up roughing her up and tying her up in the back of his truck trailer. The rest of the movie is really just a spastic chronicle of abuse. He spits on her, beats her, shaves her head, and makes her wear a bunny mask. 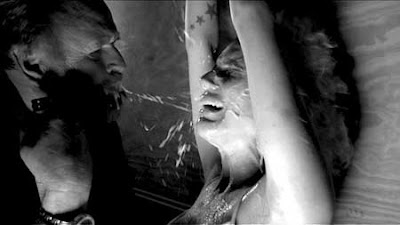 It wouldn't be a movie if she didn't escape momentarily and make a run for it. But they're in the middle of the desert and she's naked and bleeding and nobody can hear her screams. Seems like I've seen this movie before. It's like they took an overdone plot and made it agonizingly simple. 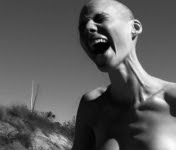 The cinematography was decent but the editing was all over the place. It was like watching the trailer with the jerky shots and violent music. In the middle of showing Bunny's struggle it would jump to scenes of women the trucker had previously tortured. Reportedly one of the actresses was actually branded for the film. Unless she wanted a brand anyway, that's really depressing. 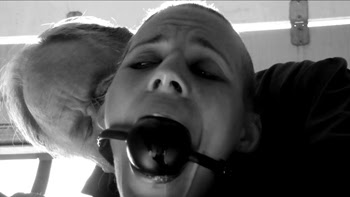 I can see that there was an attempt at being artsy with their execution, but it ended up just being annoying. There was not much of a plot, no character development, and not much of an ending. It was just shock for shock's sake and it failed to shock me. There was a pretty intense suffocation scene though. 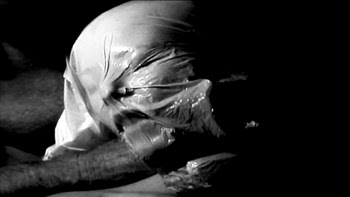 I'd say the most disturbing thing about this movie is the fact that the actress would want to relive any of this shit, even if it is just a reenactment. May have been a case of trauma turning into fetish. The score on this one from IMDB is a pitiful 3.6. Ill give it a bump just cause some poor woman got branded for this movie. It's a 4.5.

Not everything that comes through the Domain is going to be great. If you don't trust my opinion feel free to see it yourself, preferably without paying for it. Ill see you next time in Devlin's Domain.

About Me: I have a couple of different aliases, but for this column I will use my middle name. I am Devlin and I currently reside in Atlanta, GA. 32 years of age and still feeling immortal. Former Rockstar, current Pro Wrestler and hell, I'm still a Rockstar at heart. I got my first taste of obscure cinema when I was about 8 years old. My Dad would take us to the video store every weekend to stock up on classic horror films to watch on his projector. They were mostly harmless, PG-rated horror films like the great Universal monster movies. Then one night he rented a movie for himself to watch after we had gone to bed. I was so intrigued by this film that I wasn't allowed to see. I begged and begged and he eventually caved. That night I was exposed to a film unlike anything I had seen before. Ever since that night I wanted to find more films that gave me that same sensation. I wanted to feel shock and disgust. I found my place in the Horror aisle. The film I watched was Faces of Death. Thanks Dad.www.facebook.com/DevlinValek
Posted by Devlin at 6:25:00 PM