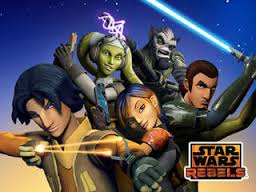 I'm late writing this I know. Two excuses though: I thought it was better to put this up closer to May 4th, and it's also one of those shows I like to binge watch so I naturally run behind. I am not the target audience for Disney XD, and I think they create their commercials specifically to drive away anyone over the age of twelve. If I can't skip the commercials I'm just not going to watch it. The other reason for the binging is that up until recently the show has been a bit inconsistent. An episode important to the story and world they're building followed by an episode where they run into Lando isn't going to keep me on the edge of my seat if I have to wait a week to see what happens next. Not that I don't enjoy seeing him, but it felt a little more like fan service rather than an important part of the story.
So if you're not already on board for the reasons listed above (or any other reason you might have) let me urge you to pick it back up now. If you don't have a DVR or On Demand I suggest putting the TV on mute and checking email during the commercials. If you've lost interest because things didn't really seem to be going anywhere in the larger Star Wars universe (which I can totally understand) it's time to give it another shot. If you've never seen it at all then now is the perfect time to start. The second season finale had me saying "Holy Shit!" in a way I don't usually associate with Disney cartoons, and a third season is on the way. 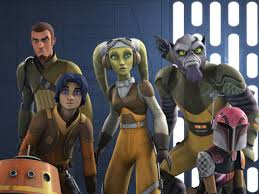 First I should probably provide a bit of background for those who have completely lost track or may not know much about the show. In the Star Wars timeline this show takes place after The Clone Wars, but not long before A New Hope. The Rebels are not much of an alliance at this point, just small groups of people who are pissed off at the Empire. Specifically, the people on a planet called Lothal where Imperial forces are really putting the smack down. We meet Ezra, a kid who has been living on his own ever since the Empire locked up his parents.He meets the crew of The Ghost which consists of your usual rag-tag group of hero types. The bad-ass Twi'lek pilot Hera, a Mandalorian girl named Sabine who likes to blow stuff up, a tough guy alien with anger issues called Zeb, and the former Jedi with a mysterious past Kanan. This small gang of good guys flies around trying to take down the Empire in any small way they can. Agents of the Empire called Inquisitors have lightsabers, and Force related powers are tasked with hunting down any Jedi or Force-sensitive people who might still be out there. They're pretty cool; even if I don't really understand how they use those spinning lightsabers to helicopter themselves around. Once Ezra is discovered to be Force-sensitive he takes off with the crew to learn the ways of the Force from Kanan. They run from the Inquisitors, try to help those living under the Empire's brutal rule, and slowly become part of a larger resistance. 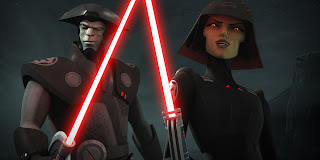 Now, let me give a little explanation about why I stopped watching consistently, and what got me all excited about it again. I watched it when it first aired because I'm such a fan girl that I'll give anything with the Star Wars name on it a shot. The character animation wasn't something that appealed to me, but I can look past stuff if the story is good. Really though, they made Wookies look goofy. Ezra is like a Star Wars version of Aladdin, and about as smart. If he'd really been living on the streets he'd have been dead a thousand times over because the damn kid trusts everyone and falls for anything. And until he gets a lightsaber he fights with this ridiculous electric slingshot thingy. But since this is on a kids channel I guess they have to make it appeal to kids by having the main character young and easy to relate to. I was, and still am far more interested in the adults around him. I am, however, not at all interested in yet another droid with a personality. It all stems from the horrible "Roger, Roger" jokes in the prequels. I just can't let that go for some reason. The excellence of the voice acting takes a lot of the sting out of what I don't like about the animation. Who knew that I would ever enjoy something with Freddy Prinze Jr.? Vanessa Marshall is great as Hera, and I could listen to Steve Blum on anything anytime. For those that don't know the name, he's voiced a ton a video games, and another ton of cartoons. Most notably, Spike from Cowboy Bebop (which is the best anime ever BTW). I liked the episodes where they were fighting Inquisitors or exploring the characters back-stories, but some of those stories were far less exciting than others. By the middle of the first season I was drifting in and out. I just happened to watch the first season finale at my father's house, when our old friend Ahsoka Tano showed up though. That's not a spoiler since she's been on the whole second season. 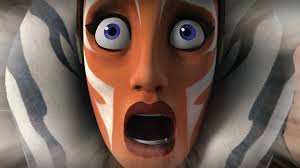 So here we are in the second season with Darth Vader being sent to put down the rebellion, and Ahsoka Tano directly and indirectly working with them. Bear in mind that at the end of The Clone Wars she doesn't know for sure that Anakin has become Darth Vader - that's important. Clones from the old clone army show up, we've got a nearly full fledged Rebel Alliance together, and you just know that Admiral Akbar is going to warn them about a trap. There are still a few episodes that don't really do much to advance the larger plot, but with so much else going on in the season overall it's easy to get past those. If you're not quite there yet I won't ruin the last few episodes of the season. All I will say is that there are some devastating discoveries (devastating if you're a giant dork, that is. I am, so I was), terrific lightsaber battles, and another prequel character we thought we wouldn't see again.

Season three was announced late last year so we can expect to see it before the end of this year. If you're not caught up, get that way now. Even if you didn't get into it at first give it a binge. Where the show is now, and where it's heading are well worth watching. I don't hand out praise lightly so coming from me this really means something. Just make sure you can skip the commercials.