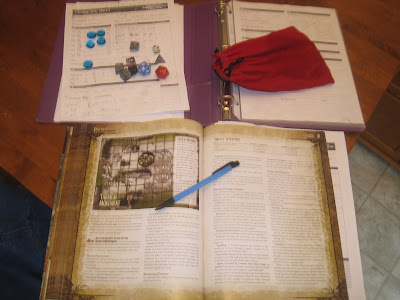 Fantasy and reality are two separate worlds for a reason.  You dive into the realm of fiction to experience something new and different.  To take you away from your everyday life for awhile.  Granted, sometimes reality can mimic fiction in strange ways that can be interesting or unsettling.  You can find a character from TV or film that makes you convinced that the writers followed you around for ideas for its creation.  I can’t even watch Piper (Charmed) or Oliver (Arrow) without cringing or rolling my eyes for this very reason.  This could be good however, if you use these similarities to yourself to help you remember what you lost in you or to help you in a therapeutic way to deal with aspects of yourself you would otherwise sweep under the rug.  That being said, people enjoy fictional worlds and characters for varying reasons:  escape, entertainment, therapy, comparative analysis, etc.

But when this fictional world is a game and the character in it is one you are creating, how much of “reality” do you let bleed into your “fiction?”  In tabletop RPGs, what type of characters do you prefer to build?

In a podcast on the Nerdist channel, Chris Hardwick and his longtime friend Felicia Day discussed things ranging from reality TV shows to their love of the open-world games Skyrim and Witcher.  One thing they touched on, however, was their typical character alignment in any character creation.  Both agreed that lawful good was a preference because they just couldn't bring themselves to, as Felicia suggested in an example, see a hostage in a game and say “screw it let them die.”  As Hardwick put it, “I think it’s Catholic guilt.’   Felicia has repeatedly shown and admitted that she is, for lack of better phrasing, the type of person who couldn’t jaywalk without feeling guilty.  Personally I love those qualities in her.  This type of discussion in the Podcast and her gaming tactics show that she is most likely to put a little of herself (or a lot) in her characters.  There’s no fault in going this way with character building if you’re more comfortable with it, especially if you’re new to tabletoping.  You’re familiar with yourself (unless you’re having some sort of existential crisis or something) so it eliminates some of the guess work of character construction, as a key element in this is backstory and personality.  You can dive right into the game and blend into it more easily, as you know the character’s reactions more instinctively.  After all, they are your reactions.

Every tabletop RPG is different.  Some operate without character sheets; just pen and paper if even that.  Some go online with the help of Skype and spreadsheets to keep track of stats.  Those that use character sheets vary to differentiating degrees in format, but they will all have the basics in terms of helping you lay out your levels, HP, MP (if used in that realm) and basic stats such as Charisma, Intelligence, Diplomacy, etc.  For your character to function as a human- or an Elf, or a Gnome... whatever- you have to determine which of these traits they’ll use more heavily and why.  This mostly depends on class and race, but the weight of your character's backstory and personality play a heavy part in this as well.  So what happens when the above listed tactic of what I call "method building" doesn't really work for you?  What happens when you find that characters with traces of the real you just...well...suck?

I tried the route of writing myself into a character.  It didn’t work well for me.  I am a martial artist of two decades.  I thought being a Monk would, as a result, be ideal.  This was what I played for many campaigns.  I bombed every time.  I absolutely sucked as a Monk.  I offered no strong backup as I had no serious arsenal; I was the weapon yet I had no real buffs at all to help my sadly crappy stats.  My rolls constantly sucked.  I hadn’t balanced my skill ranks appropriately and if I could just go back and get better feats...ugh.  So why does this strategy of building more of yourself into characters works for some and less for others?

Terry Mixon, author of The Empire of Bones Saga book series and co-host of the Dead Robots Society podcast, referenced character building one DRS episode.  Granted, he was discussing it from the perspective of writing lengthy fiction and manuscripts, but it can be reverse-engineered to fit this conversation as well.  Mr. Mixon has been a D&D player in various forms for over thirty years and has seen many various on character building:  Players building the characters from the ground up from their own heads, the DM’s rolling the stats ahead of time and handing the players the sheets to fill in the blanks on in terms of backstory and personality, etc.  He made a point of referencing the fact that character building could be like Improv, coming up with this person’s like almost “on the fly.”  He said that when it comes to creating a character and having that creativity flow into writing in general that if you can learn to do that and learn to tell a story, you have figured out what path you want to be on to be a great writer.  This struck me as I realized that, months before hearing this particular podcast I had switched from a Monk to a Druid.  I have never played a spell-caster and crafting this person would be new territory.  It meant a new world, new outlook, new story...an entirely new person.  And you know what?  I have slaughtered creatures I never would have as a Monk.  I have been a better teammate and have been better at strategy as I have a better arsenal to work with.  And the new personality gives the character a better outlook.  A fresher outlook.  Switching gears was the best thing I could have done.  Thinking as the writer that I am and the gamer that I am rather than trying to shove “normal me” into a character was my better option.

This will be hit or miss.  Bear that in mind.  You might make a Paladin (but...why?) with your attitude and personality traits and it might fall flat.  So you might switch to a Half-Elf Sorcerer and still keep your personality, and it works perfectly.  Or you might keep your Paladin (I say again...WHY?!) but erase the backstory and make up a person in your head to take him on a unique path the helps the game flow better for you and all involved.  You never know.  The worst that happens is one lousy Nat 1 wipes you out in a dungeon crawl and you re-roll the character the opposite way you did last time and try this advice to see what sticks.

You don’t have anything to lose.  Unless your party has a Ranger who steals all the gold you drop when you croak before the new character jumps back in.  Or you get resurrected and you’re missing an arm or an eye or a foot.  I could on all day…