Thanks to the recent film release of The Forest, a lot of people are just now learning about the legendary suicide forest of Japan. It's just a shame it couldn't have been done in a better way. But as haunting and appealing as the story of that forest is, the United States is actually home to the biggest suicide hotspot in the world. Now we have something to brag about. The best thing is that if you want to know more about it you don't have to suffer through an overly fantastical, jump-scare, garbage horror film. There is a documentary and I am taking a look at it this week in the Domain.


"Suicide is painless / it brings on many changes / and I can take or leave it if I please". Those lyrics from the theme to M*A*S*H always come to mind when suicide comes up. I'm guessing most people would never even come close to such an act, but still hundreds choose to flip the switch every year. In some cases it's a permanent solution to a temporary problem. Other times it could be the result of lifelong depression and mental illness.

Nobody knows for sure what's going through the minds of people who make the ultimate choice. The living look down on the act and label it a coward's way out. Other cultures find it to be an honorable end. Having had my own share of suicidal thoughts in my teenage years, I feel my fear of the unknown is all that kept me alive. At the time I wasn't able to relate to anyone and didn't feel I belonged on this planet. Of course I realized later my problems weren't that bad and that this is the only life I'm guaranteed. There was a scene from Zack Snyder's Dawn of the Dead that comes to mind that communicates the value of life very well. One of the characters was bitten by a zombie and about to turn into one. The others were waiting with a gun to put him down and he told them to make sure he was dead before they shot  and that he wanted to feel every last breath.

There are all sorts of things that push people over the edge. It could be their significant other leaves them, they lose their job, they lose a friend or family member, they've been diagnosed with a terminal illness, or they've committed a crime they don't want to serve time for. These people must not be able to find any redeeming qualities in life to balance the negatives. Once they've made up their mind, then the question is how to do it. I would think a bullet to the head would be the way to go, but people have used poison, hung themselves, slit their wrists, and jumped out of buildings. There are some places that call to those in despair. The place that draws more self inflicted death than anywhere else in the world is...

In 2004 director, Eric Steel, pulled a fast one on the city of San Francisco by talking them into giving permission to make a film about the majestic Golden Gate Bridge. What he didn't tell them was that he would have multiple cameras filming the bridge non-stop for an entire year with the intention of catching suicides on video. This puts the national landmark in a very dim light when he manages to record 24 suicides within a year. He also manages to get a few friends and family members of the victim's to agree to be interviewed. He allegedly didn't tell them at the time of the interview that he had footage of their loved ones' last moments alive. I'm assuming he had to tell them before the film was released to get permission to use the footage. I'm sure some may have been upset, but a lot of them probably realized it wasn't so much an exploitation of suicide, but a study of mental illness.

The film starts up with shots of tourists and residents walking up and down the bridge. Knowing what the film was about, I was expecting all of them to start leaping to their demise. Shots were shown of several people leaning on the railing to look out onto the horizon. Finally after showing several people that I just knew were about to throw in the towel, what looks to be an older man climbs over the rail and takes a quick look around then steps off to 100mph free fall into the water. There didn't seem to be any emotion or drama to it. He leapt to his death just like I would jump into a swimming pool. 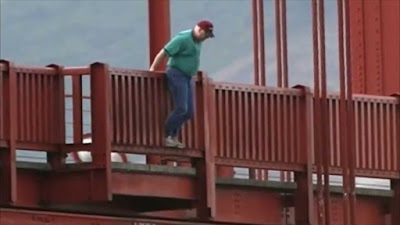 There's an interview with a witness to the suicide that happened to be in the water when the man jumped. He seemed to be confused as to whether he just saw what he thought he saw. There was soon confirmation in the form of a rescue boat with a crew in hazmat suits. 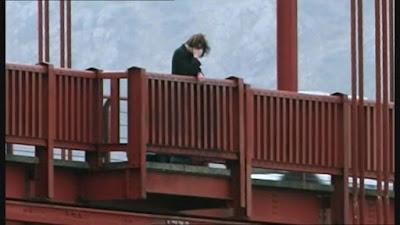 The rest of the film follows the same format, jumping from interviews to footage from the bridge. Friends and family offer insight into the minds and lives of the victims. One couple recalls how their son was seemingly obsessed with the bridge and wanted to take pictures in front of it days before his death.

There's an interview with a photographer who is seen taking pictures on the bridge. A young woman climbs over the railing onto a large perch. He said he thought nothing of it at the time and decided to take pictures of her. He got some pretty good shots of her examining her potential watery grave before realizing her intentions. He grabs her by her shirt as she struggles against him and pulls her over the railing. He holds her down with his bodyweight and calls the police. 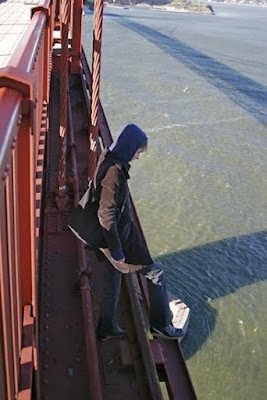 Another segment involved an actual jumper who managed to survive the plunge. His parents were worried about him and his dad tried to talk him into going to work with him, but he talked his way out of it and headed to the bridge. He said as soon as he jumped he decided he wanted to leave. That's some shitty timing. He managed to adjust his body so he landed feet first within the 7 second free fall. The impact plunged him 50 feet underwater and knocked him silly. He managed to get to the surface and attempted to tell for help. He felt something brushing his leg and assumed he was about to be eaten by a shark. It turned out to be a seal that was keeping him a float. He claims it was God that saved him and that nobody will tell him differently. I think this takes credit away from the seal, but people have been taking credit away from doctors for centuries. 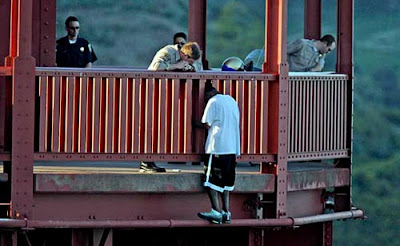 There was one jumper that particularly caught my interest. He was into rock music, had long hair, dressed in black, and was into comics. He kinda reminded me of myself. His friends said he could only engage romantic relationships through a computer. He was always joking about how he'd kill himself so his friends never believed him. They follow his walk on the bridge throughout the whole movie. I was beginning to think there was some reason they couldn't show his jump, because there was so much footage of him just going back and forth on the bridge. It turns out he had the most impressive dive of everyone. Instead climbing over the rail he climbed on top of it. With his back to the water and arms stretched out to his side, he falls backward and rotates holding his posture on the way down to land face first with a big smile. You could tell the guy really wanted to die. 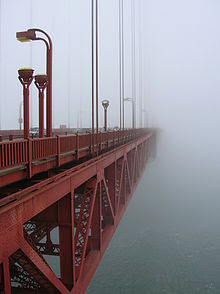 I have mixed feelings on the act of suicide. I do believe there may be circumstances that warrant it. I'd like to think that if I ever wanted to die it would be in my full control. On the other hand a lot of people change their minds last minute or survive and have a change of heart. Obviously those people could've used some outside interference before making a regrettable decision. Another thing this film addresses is the effect it has on the people that care about you. Some of them are angry and offended that their loved one has left them behind. Some even say they feel like they've been betrayed.

This film is sitting at a 7.3 IMDB score, I'll drop it down to a 7. It was definitely more informational than entertaining. There wasn't very much style to it, but considering the subject matter, too much style may have seemed insensitive.

That's it for today's edition of the Domain. Hopefully nobody reading is contemplating suicide. The way I see it, this is the only existence that I'm guaranteed so I'm just gonna ride it out until the ride is over. Things are usually pretty shitty, but I can always find some Needless Things to look forward to that distract from the negatives. I stayed alive last week to wrestle my partner, Johnny Danger, in Porterdale. I'm staying alive this week to see Captain America: Civil War and to see Filter and Orgy in concert. All you have to do is stay alive, and you should stay alive to see what's next in Devlin's Domain.

About Me: I have a couple of different aliases, but for this column I will use my middle name. I am Devlin and I currently reside in Atlanta, GA. 33 years of age and still feeling immortal. Former Rockstar, current Pro Wrestler and hell, I'm still a Rockstar at heart. I got my first taste of obscure cinema when I was about 8 years old. My Dad would take us to the video store every weekend to stock up on classic horror films to watch on his projector. They were mostly harmless, PG-rated horror films like the great Universal monster movies. Then one night he rented a movie for himself to watch after we had gone to bed. I was so intrigued by this film that I wasn't allowed to see. I begged and begged and he eventually caved. That night I was exposed to a film unlike anything I had seen before. Ever since that night I wanted to find more films that gave me that same sensation. I wanted to feel shock and disgust. I found my place in the Horror aisle. The film I watched was Faces of Death. Thanks Dad.www.facebook.com/DevlinValek
Posted by Devlin at 5:21:00 PM