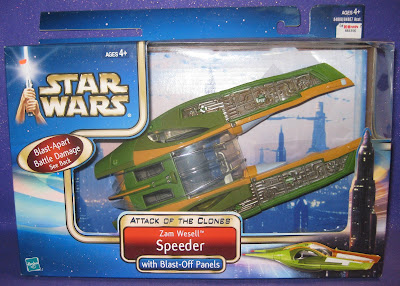 I’ve complained plenty about what Hasbro is doing with 3.75” scale Star Wars figures. I’m sure you guys are tired of it and there’s not really any more ground to cover there.

But I’ve barely even gotten started on all of the problems I have with their current vehicle offerings!

They’re too small, they’re crazily overpriced, the figures don’t interact with them particularly well, and most of them feel pretty cheap. You can read more about that in my round-up review of the new toys. The bottom line is that in the same way that the new figures aren’t for me, the new vehicles aren’t, either. I actually would like to have that TIE Fighter, but I’m not paying forty bucks for it.

What I’ve come to realize, though, is that there are plenty of holes in my Star Wars collection. Characters that I may not have considered important, vehicles that I might not have had the money for; that sort of thing. There’s a whole world of stuff that came out between 2002 and 2007 and I was very picky about what I was buying then. I only bought the coolest of the cool or things that I already had an attachment to (Original Trilogy stuff). And even some of that fell by the wayside because I was in a phase where I hated gimmicks and action features and Hasbro was doing some really wild, experimental stuff back in the early aughts.

Before I get any further, I want to give credit to Adam Pawlus at GalacticHunter.com for keeping me up on Star Wars collectibles all these years. It’s a great site and I check it every day.

Most of the stuff from the time period I’m talking about ranges from cheap to dirt cheap now, especially at toy shows. Especially if it’s Prequels stuff. Zam Wesell’s speeder is one such item.

I passed on this back in the day because of the crash gimmick. I like Zam Wesell because she’s a Reptilian bounty hunter, proving that David Icke’s theories exist even in a galaxy far, far away. I like Zam Wesell’s speeder because it has a cool shape and color scheme and a lot of clear cockpit. I didn’t buy it because the front is rubber.

Now I’m older and wiser and also the thing has been around for fourteen years and the rubber hasn’t broken down or been eaten away by potentially corrosive paints, so I thought it was time to buy this neat vehicle. Especially for ten bucks. A modern vehicle this size would be thirty.

Some of the Prequel stuff doesn’t feel like Star Wars to me. The Naboo Starfighter, many of the blasters, and most everything on Naboo, really. It’s too rounded and clean and 50s sci-fi-looking. Most of the tech and hardware from the Original Trilogy was kitbashed or repurposed stuff that looks familiar but different. The Prequel props look too outer spacey.
Zam’s speeder looks like Star Wars to me. The colors might be a bit much, but the shape works. This could sit right beside a Bespin Cloud Car or a Snowspeeder and look fine.
And just look at all of that sweet, sweet translucent plastic! I love this box art. The blue and gold is eye-catching and says “new product!” I dig the logo, too. Those two hands on the lightsaber hilt scream “Star Wars” without being a particular character’s face. I’ve never been crazy about Hasbro’s use of one character’s face for a whole line. I also love that Coruscant tower on the bottom right. It’s just a neat touch of background rather than the speeder just floating there without context.

Coruscant is one of my favorite things about the Prequels. Thanks to the Expanded Universe I had developed a love of the gigantic, planet-spanning city and seeing it on film was exciting to me every time. From our first look at the Jedi Temple in The Phantom Menace to the incredible battle over Coruscant that opens Revenge of the Sith, I love every second of focus on the center of galactic government, even just the interior shots.

I realize a paragraph about Coruscant is not necessarily what one would expect from a review of toy packaging, but it has just struck me that this is one of the reasons I don’t hate the Prequels like so many do. We see a ton of this place and I think that’s great.

Back to the box. It’s a hanging window box with some unique shapes in the window and the box itself. I don’t know that I appreciated the bright, colorful graphics back then, but I do now. This speeder came from KB Toys and cost more than what I paid for it. That price tag sparked some powerful nostalgia when I saw it. I miss the heck out of mall toy stores. And vehicles this size being fifteen dollars. 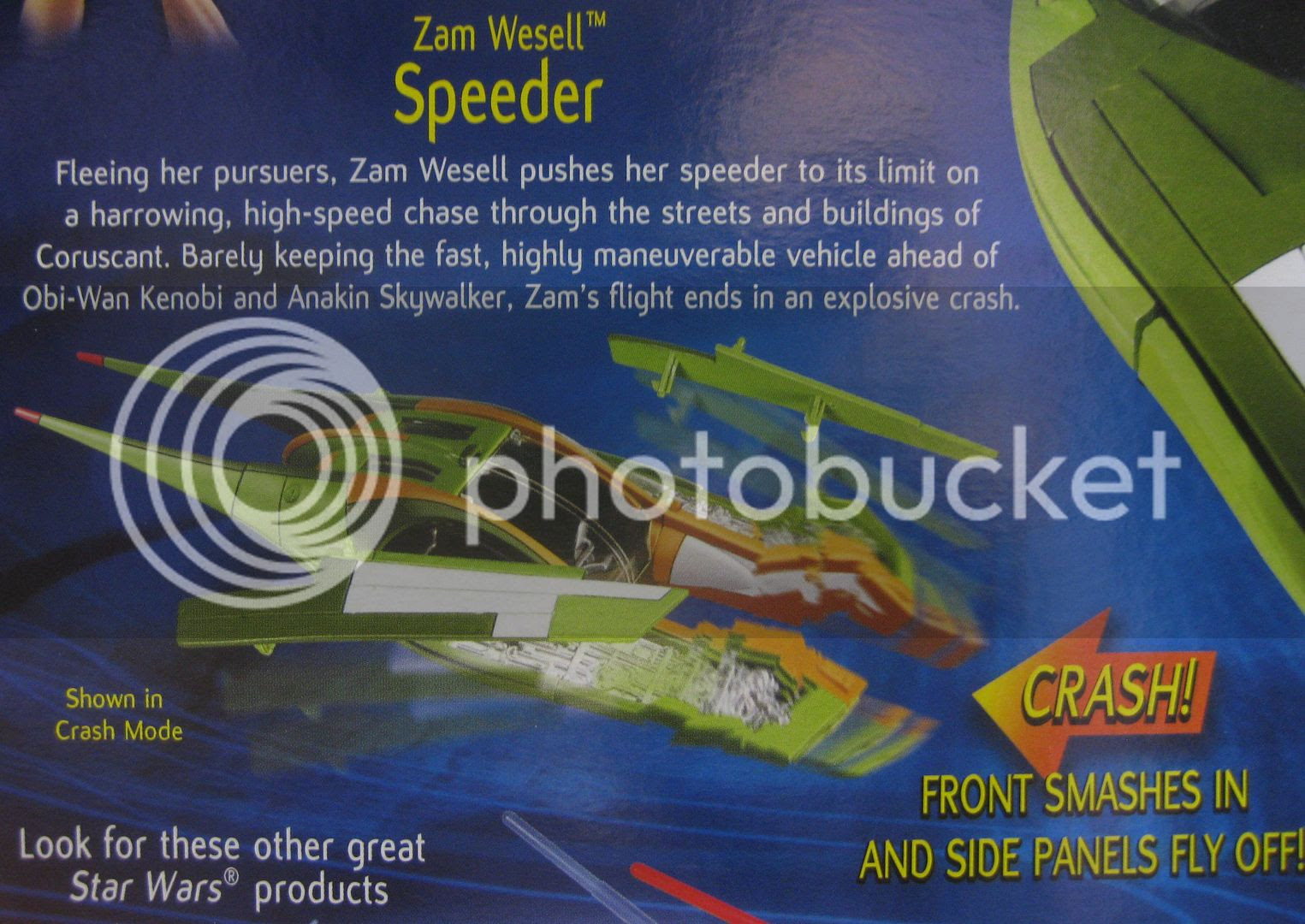 The back has big, colorful pictures of the speeder, as well as companion toys. I like the picture explaining the action feature and the big “CRASH!” in the arrow. A casual glance does not reveal that the front mandibles are rubber. The gloss and texture is close enough to the rest of the ship to look good. The only problem is that the rubber obviously doesn’t hold a shape as well as hard plastic and there’s some warping due to the “CRASH!” action feature. I’m so impressed with the feature and the sculpt of the rubber portions that it doesn’t really bother me. Plus, once you have the removable panels in place it’s even less noticeable. 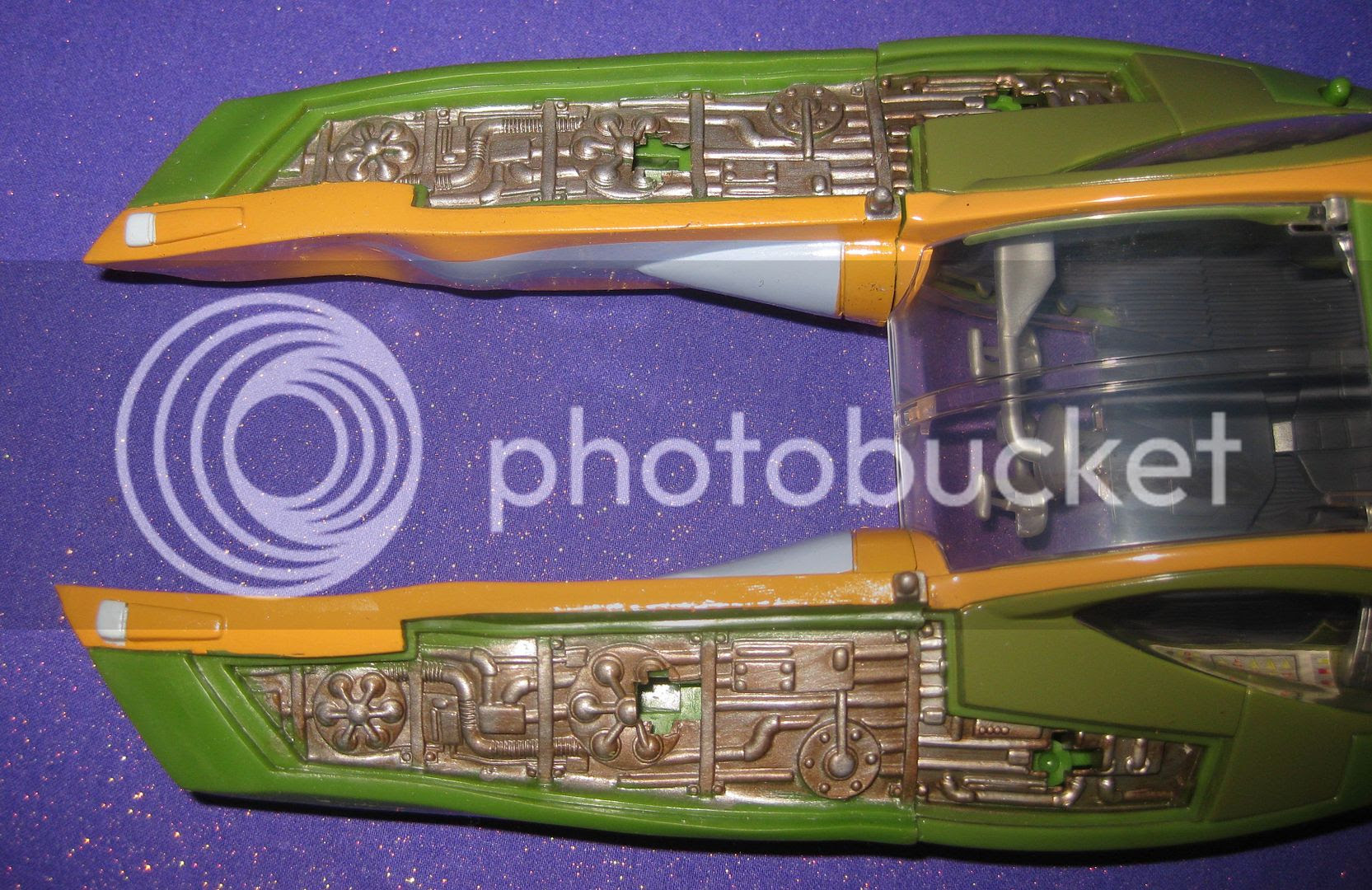 Once you get close up there’s an amazing amount of detail in the portions meant to be concealed by the blast-away panels. Tons of conduits and wiring with a wash of rust-colored paint to give them definition. Speaking of paint, I’m very surprised at how good the paint on the rubber looks. The application is clean and it’s not flaking off or inconsistent anywhere. There’s a clear plastic piece under each of the front portions to allow the speeder to sit properly. Presumably a speeder working on repulsors wouldn’t have landing gear.

The main body that houses the cockpit is beautiful. I love how much transparisteel (the Star Wars galaxy’s go-to material for windows) there is. There are five panels of transparent plastic, with the central one wrapping around the front down to the underside. This central panel has two halves, the upper of which opens for access to the cockpit. There’s a fin that starts with an opening on top of the chassis and runs all the way around to the bottom. It’s such a cool little design extra and the yellow trim on it looks great complimenting the other yellow areas. 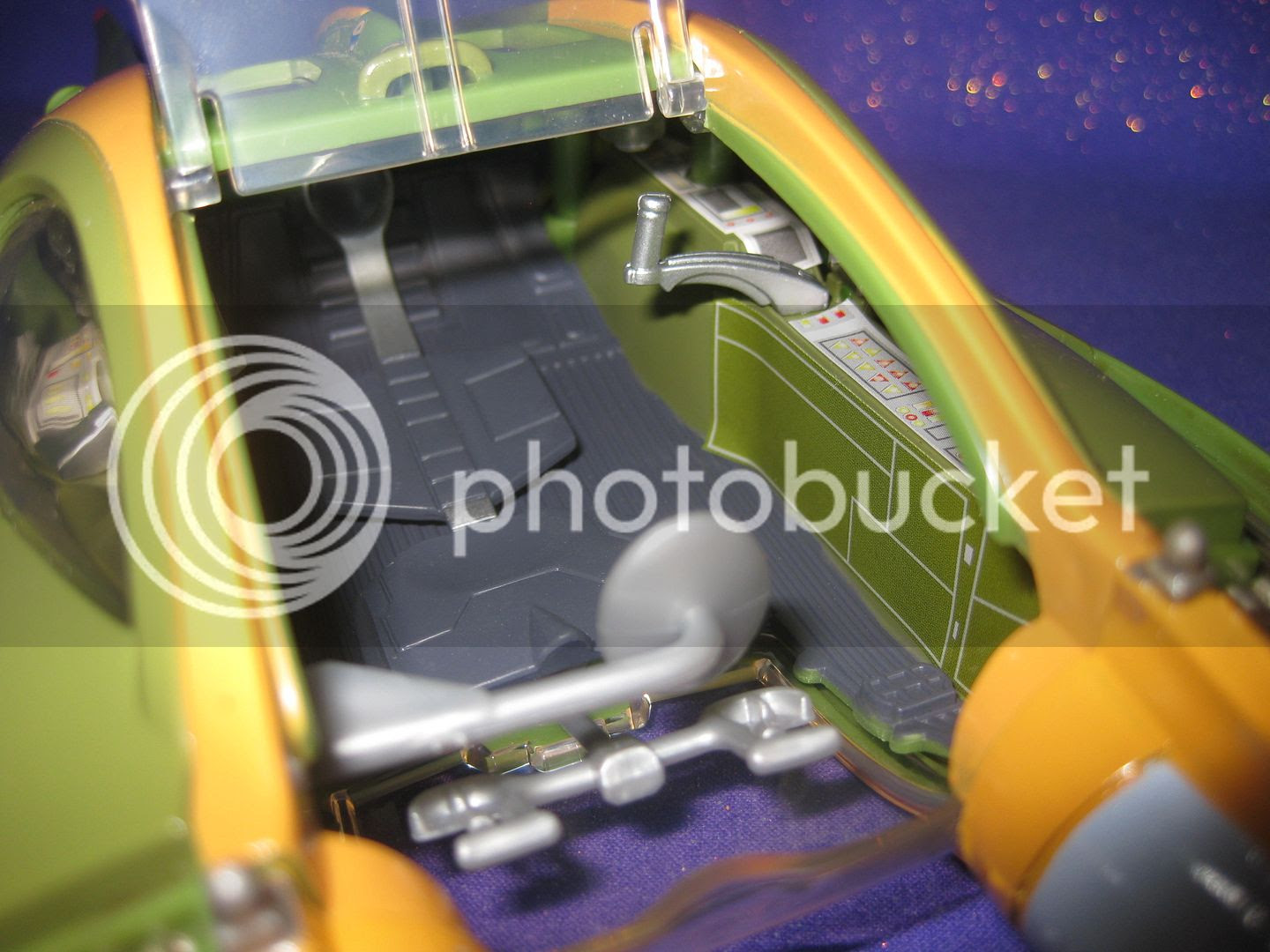 The interior is amazing. I need to get a Zam from this era because I don’t even want to try jamming the Vintage Collection one in there. Cramming figures into cockpits and getting them to sit right is typically easier with minimally articulated figures, believe it or not. Their parts are going to go where they’re supposed to or they aren’t. There’s no futzing around trying to get everything to sit right. The two control sticks are on pivots and can move forward and back. There are several paper stickers to represent paneling and controls. This is a rare instance when I’m glad they were pre-applied because there’s no way I could’ve gotten in there. It’s a shame some of them are crooked, though. The seat and headrest are a separately sculpted piece that is slightly raised from the rest. Finally, there’s a display screen and a set of foot controls at the front. This is such a cool piloting setup. I love all of the individual parts and the care that went into representing them. So much better than just an open space to stick the figure in. This is the best I could do to get a picture of the display screen. The rear nacelles are a problem. They were bent in the package, so I took a hairdryer to them and attempted to straighten them out. It seemed effective, but by the time I got set up to take pictures they were warped again. It isn’t terrible, and it won’t be very noticeable once I have this hanging from the ceiling, but it bothers me. Otherwise these look great. The colors match the rest of the craft perfectly, which doesn’t always happen across different materials. The paint on the “lights” is bright enough that they almost do seem illuminated. 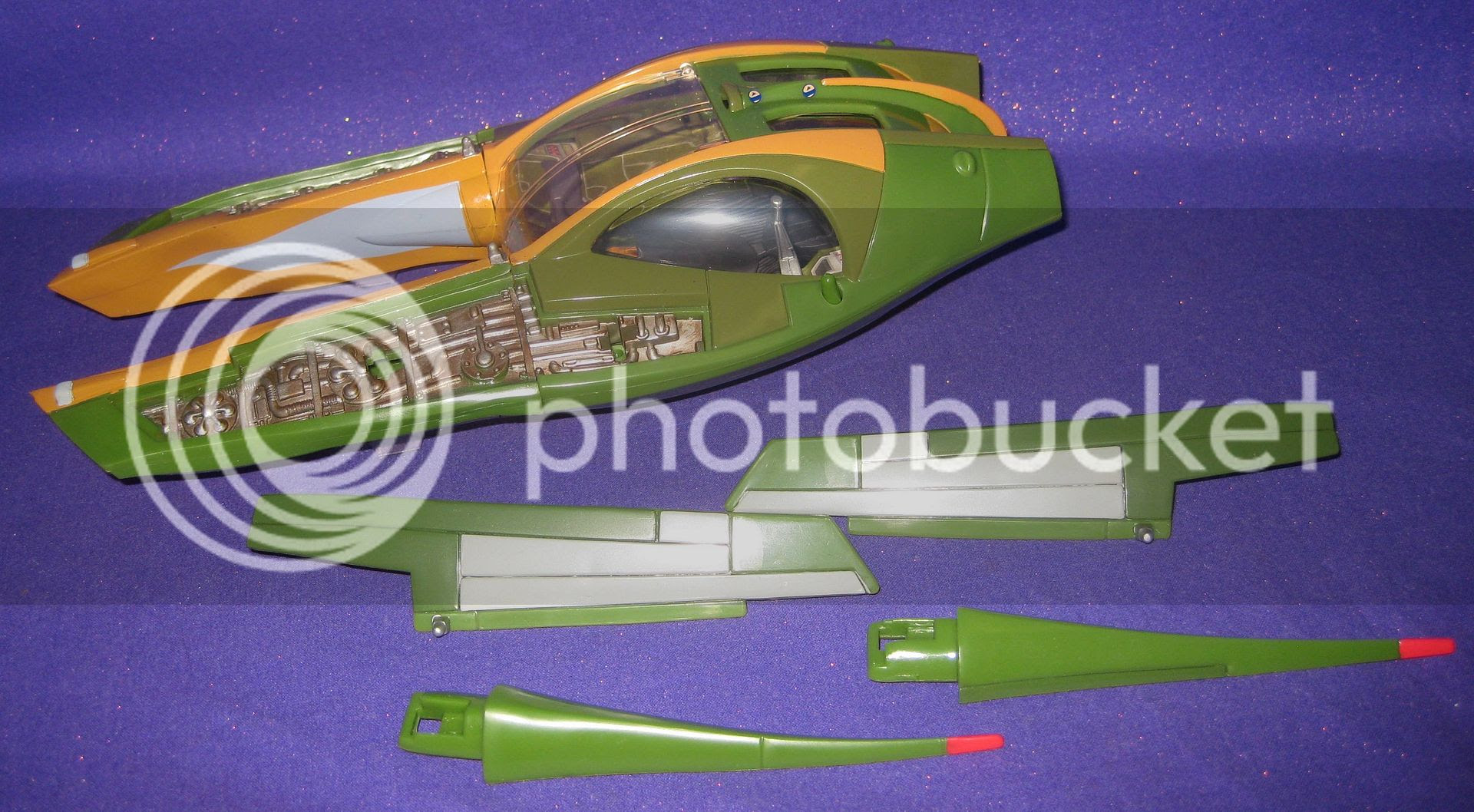 The speeder sports a “crash” feature.

There are two panels in the box that click into place over the exposed portions of the front mandibles. They line up nicely and stay put well despite the soft material they are blending in with. A casual glance won’t necessarily even reveal that there’s a feature here. They don’t blend seamlessly, but just appear to be a part of the toy’s construction. When you push the front of the mandibles – or ram the speeder into something – the panels pop off and the front of the vehicle crumples. It’s a lot of fun, it looks great, and it works well. There are two buttons at the aft of the speeder that pop the crumpled parts back into place so that you can replace the panels and start over again.

Once you start inspecting the speeder the difference in materials is apparent, but the feature is so well executed that I don’t care. The design and paint camouflage things well enough that this can sit on the shelf or hang from the ceiling and look like just another vehicle and not some weird gimmick. On top of that you have the great cockpit interior that is a little more interactive than just an old school hatch. All of that makes for a very fun and satisfying vehicle.

If you love toys, this is for you. You should be able to score one for ten to fifteen bucks and it is totally worth that. You’re not going to find a comparable modern vehicle for that price.
If you hate the Prequels and anything associated with them, this isn’t going to change your mind. It’s a fantastic toy, but it’s not an X-Wing. But it’s also cheaper than any X-Wing you’re going to find.