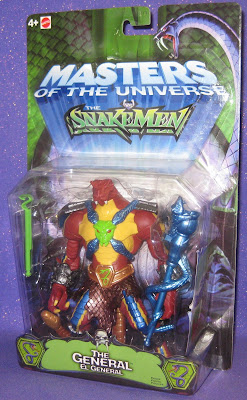 I’ve got a post going up in a couple of weeks that addresses some of the problems that modern toys are presenting to collectors. Essentially the days of high quality at an affordable price are gone and it’s harder for me to get excited about most of what’s being offered.

As such, I am looking to the past. Almost every toy line that I have ever collected has some holes in it. Figures or vehicles that have eluded me for one reason or another. Sometimes I might have gotten frustrated with a line and just quit, but liked the toys enough to hang onto them.

That’s basically what happened with the 200X Masters of the Universe line. I was into it pretty seriously at first, but after walking into stores and finding nothing but He-Man and Skeletor variants time after time I eventually gave up and focused on other things.

Not that every 200X toy that will ever be made has been made it’s a good time to start looking around for deals on the figures that I never saw. The same goes for many lines of the past. Or yesteryear, if you will.

The way that the Snake Men were used in the 200X Masters cartoon was amazing. Their arrival was treated as a catastrophic event for both the heroes and the villains. I love this kind of story. I’m sure it dates back further than I’ll ever realize, but I remember the first time this sort of third party invasion happened in a show that I was invested in it blew my mind.
The General here is actually Rattlor. Or General Rattlor. In the 200X cartoon he was huge and terrifying and basically in charge of the Snake Men. He also talked a lot about the Snake Men’s taste for human flesh.

The 200X cartoon was way, way different from the Filmation cartoon.

Holy crap, this figure is so much better than the Classics Rattlor. It’s stylish and colorful and just looks like fun.

It does, however, come with just another version of the lame Snake Men staff.

The look of the line changed when Mattel introduced the Snake Men. I’ll give Mattel credit for one thing – they sure do know how and when to freshen up a line’s packaging. And they can make some eye-catching designs.

All of the figures from this wave came in Snake-centric packaging, with scaly, green backgrounds and Snake logos all over the place. It’s a damn shame we never got to see the Horde in full effect on the show. I would’ve loved some Evil Horde cardbacks.

The Masters of the Universe logo remains unchanged from previous releases and is still a sticker, which I like. Rattlor fills up the blister, looking quite large even for a line of large figures.

The cardback is actually pretty ugly. It explains the General’s features and showcases the other figures from the wave.

Rattlor is a fantastic, unique sculpt. The head is covered in scales and has nice, big ridges over the eyes. The protruding fangs are part of the hinged upper head and look great separately sculpted from the jaw. The paint is solid, though I would’ve liked black for the slitted irises. I know I could do that myself, but I’m not going to.

The inside of the mouth is painted pink and is more detailed than I expected. Reflecting the gimmick of the vintage figure, Rattlor’s neck extends. The sculpt is great, but the fact that it’s all yellow is disappointing. It looks pretty bad extended, like a yellow Cheet-o.

The massive upper body creates a great profile, with the oversized shoulders enhancing the character’s top-heavy look. The sculpted scales continue down the torso and onto the arms, which have a great reptilian Popeye look. I love the style and proportions on these 200X figures. The chest piece is separate and sort of snaps onto natural ridges on the figure to stay in place. Mine is slightly warped and off-center, but a hairdryer should fix that. The harness has a wonderful paint job and tons of textures. It’s actually in the shape of four snakes holding a larger snake head in their mouths. SO METAL. The shoulder armor in particular is nice and features some cracks and damage.

The stripes running down Rattlor’s arms look great, but I’d be lying if I said the paint on the gauntlets didn’t bother me. It stops shy of covering the upper portion and it’s super noticeable. While this figure is overall great, this is classic Mattel. The sculpt of those gauntlets is great, though. They match the shoulder plating and have Batman-like fins on them, which looks cool. Rattlor’s hands are three-fingered and have yellow talons. Thye look great.

The scale mail kilt looks awesome. It hangs from a wide belt with the Snake Men crest on the front and each scale has a distinctive, raised sculpt.

The worst thing about this figure is this tail. I can’t even imagine someone thinking it was okay to not only make it this bronze color, but to leave it entirely unpainted. I don’t care that it isn’t articulated or a wire bendy piece. It just looks terrible and mars an otherwise remarkable figure. This is part of Rattlor’s body, not a strap-on device. There’s no reason for it to be the same color as his belt.

The calves are armored with greaves that match the gauntlets on the figure’s forearms. Here the paint goes all the way to the top, but Mattel didn’t paint the talons on Rattlor’s feet yellow! ARGH. You might be able to notice in this picture that the blue in the stripes is metallic. It looks great.

Rattlor comes with a very 2000s version of the vintage Snake Men staff, a projectile, and a Masters of the Universe vs. The Snake Men sticker.

Yes, I count the sticker because stickers are neat.

This Snake Men staff is less of a staff and more of a wand. It’s only one color, but that color is metallic blue, so that’s not awful. The projectile looks like Riddler’s cane. It plugs into the wand/staff nicely and stays put, a novelty for such things these days. When you press the button behind the serpent’s head it shoots out a fair distance.

Rattlor can hold it just fine, but not in any way that suggests this is a projectile weapon. I’m not sure how he’s supposed to aim, but once I put the figure on the shelf this thing is going in a drawer anyway.

While that yellow neck is butt-ugly, the extension function and the hinged jaw are great as far as the figure’s functionality as a toy. They’re also concealed well enough that the gimmicks don’t ruin the aesthetics. The neck is activated by pressing a button on the figure’s back. It clicks into place when not extended and the head even swivels on the end. Pretty great.

The articulation is the same as most figures in this line. Since Rattlor is so big there’s not much he can do, but his arms have a great range and his wrists do turn. It’s simple, but far better than vintage MOTU.

That tail. It sure is an eyesore, but it does have a little shaker in the end so that the General can rattle. It’s hilariously small and unimposing, but it’s a neat extra feature that wasn’t necessary. Those tend to be the kinds I appreciate the most.

Between General Rattlor’s built-in features and his Snake Wand, this figure has an above-average play value for the 200X Masters line. Well done, Mattel.

I’d love to score General Rattlor higher, but those paint issues are really bothering me. I suppose I could excuse the neck since you can – and most likely will – display the figure with that hidden. But the unpainted talons on the feet are noticeable and that tail is terrible. The bizarre thing is that in the cartoon he was overall less detailed, but his tail is clearly an organic part of him. They could have at least made it red.

Otherwise this is a fantastic figure and a worthy addition to your 200X Masters of the Universe collection. It has tons of personality and aside from the paint issues is the best Rattlor figure out of all the lines.