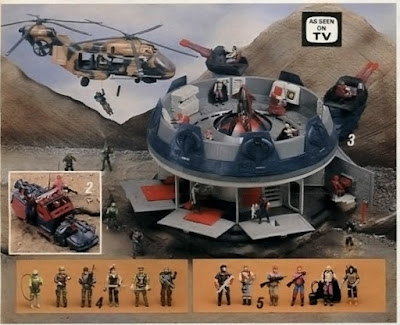 I turned 40 last Tuesday, which means this post would have probably been a bit more relevant to put up then. But I didn’t think of the idea until just now because I AM AN OLD MAN AND MY BRAIN IS SLOWING DOWN.

Thirty years ago I was ten years old, which means I was still at optimal receptiveness for the things that would in 2016 evoke fond memories and feelings of nostalgia. I got the idea for this post from the first Dragon Con panel I was a part of – 1982: Best Sci-Fi Movie Year Ever? (or some such thing). We had a great discussion about the movies that came out that year. Sadly nobody recorded it, but I thoroughly enjoyed having a topic that was both broad and focused. It was only 1982 sci-fi movies, but there were plenty to discuss!

Over the next few weeks I’m going to touch on a broad range of pop culture subjects from 1986 – movies, toys, TV – and just share some memories about the things that affected me the most. Today I’m starting with the toys and cartoons (all of which are related) because this is, after all, Needless Things.

I have to start with the Joes. In 1986 GI Joe was my primary interest and to this day I have more affection for the Real American Hero franchise than just about any other pop culture trend. I think 1985 was probably the peak year for the best toy line ever because that was when the cartoon debuted and the comics and toy line were going strong, but 1986 was no slouch.

In my opinion, it was the best year for GI Joe toy releases. Not that all of my favorites came out that year – they didn’t. But because every single release was awesome and a must-have part of any collection. Thirty years ago we saw the release of the first B.A.T., Beachhead, Dial-Tone, the much cooler second version of Roadblock, Mainframe, Low-Light, the first Viper, Zartan’s siblings, and SO MANY MORE! The single card figures from ’86 stand out to me as the best of the line.

On the vehicle front, we got the H.A.V.O.C., the Tomahawk, and the Dreadnoks’ first dedicated vehicle, the Thunder Machine! Add to that Serpentor and his Sky Sled and Sgt. Slaughter with the Triple T and a few other unique, fun toys and you’ve got a heck of a year. 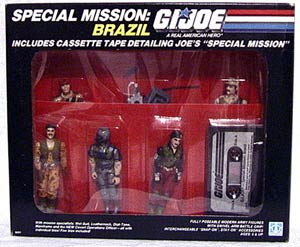 1986 also saw the release of the Special Missions: Brazil set. This was a Toys R Us Exclusive that included a cassette tape featuring an audio play of the titular mission. My mom bought the set for me as a surprise and I was blown away by the fact that there were different versions of Dial-Tone, Leatherneck, Mainframe, and Wet-Suit and a whole new figure called Claymore. Well, new-ish. He was made of farmed parts. But still – this was a new Joe that wasn’t available anywhere else. I was so proud of the fact that I had these Joe variants that none of my friends had.

If you’d like to hear Special Mission: Brazil, the excellent YoeJoe.com has it archived here.
You guys – I am not even done yet. Hasbro also released COBRA’s first headquarters playset (if you don’t count Sears Exclusives) in the form of the Terror Drome! It was one of the most epic toys of my childhood and I still have around seventy percent of mine. Maybe sixty. I’m sure you’d like to hear more about the Terrordrome. Maybe another day. I’ve still got a ton of ground to cover here.

As far as the cartoon, this was the year that saw the introductions of both Serpentor and Sgt. Slaughter. I love the Arise, Serpentor, Arise! miniseries and the idea of Serpentor. The execution was never there (until we got to DDP’s excellent comic book run). Sarge, on the other hand, was the most delightful thing to ever happen to animation because he was a bona fide WWF/AWA wrestler and he did the voice work himself! The cartoon was canceled late in the year, which broke my heart. Fortunately, something else popped up to ease the pain… 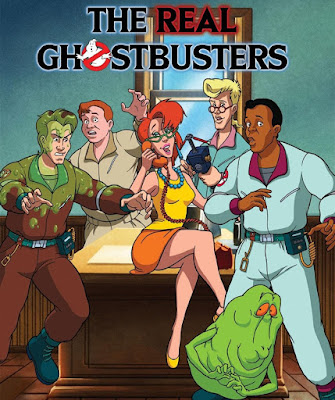 GI Joe was not the only toy line that had an amazing year. Several landmark lines debuted, most of which I only had bits and pieces of because my parents mostly kept to allowing me to collect one line at a time. And in 1986 this almost killed me.

The Real Ghostbusters toy line debuted in 1986. I would count it as one of the best licensed lines of all time, though there was one blight on an otherwise fantastic collection – the Stay Puft Marshmallow Man was too small. Nowadays we’re lucky if a giant monster is even a third the size that it should be in relation to the rest of a line (see the current Giant Man build-a-figure), but back in the 80s gigantic toys were no big deal. There’s no way a twelve or even sixteen inch Mr. Stay Puft wouldn’t have sold like crazy. This always bothered me.

Otherwise the line was an outstanding combination of fun and good likenesses from the animated series. Granted, almost none of the ghosts actually appeared on the show, but they were all great designs. The human figures were larger and less articulated than I liked, but the features were so much fun and the line so jam-packed with ghosts that I wanted every single release. Somehow or other I did convince my mom to break the “one line at a time” rule and the first Real Ghostbusters toy I got was an orange ghost called “Squisher”. 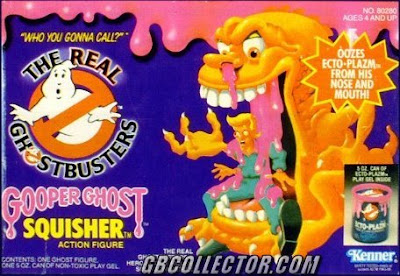 I managed to obtain all four Ghostbusters and some of the Fright Features figures, but I never got any more ghosts. I can’t for the life of me remember why. Probably had to do with the Ectoplasm.

Speaking of which, The Real Ghostbusters animated series debuted late in the year and will forever be my true canon to follow up the original movie. It featured intriguing stories from notable writers such as J. Michael Straczynski, Chuck Menville, and Steve Perry (not to be confused with the Journey guy). The animation was top notch and the voice actors were very good, even if they didn’t sound exactly like Peter, Egon, Winston, and Ray. Now I look at it as the finest animated series of its time (yes, even over GI Joe), even if I hated Egon’s stupid hair back then.

Many of you guys know that this was the toy line that I always wanted and never had. There were three gigantic monsters – about the size a Stay Puft Marshmallow Man should have been – that were undoubtedly the centerpieces of the line. There was nothing else in the toy aisles quite like Metlar, Tendril, and D’Compose. There were also smaller monsters made of rocks, trees, and lava. They all had light piping gimmicks, which I’m not typically a big fan of, but they worked really well and were present throughout all of the monsters in the line, so there was a uniformity to them.

There were also four humans in big monster fighting suits and two lackluster vehicles. I’m a good ways into completing the line now, but I think I’m going to skip the vehicles.

In my opinion these Hasbro toys were absolutely the coolest things that came out in the 80s. I had a couple of the human figures, but my mom would not budge on buying me the monsters. They were pricey and gross and she just was not having it. I had Liquidator and Dr. Derek Bright and that was it. They were intended to be 3.75” scale humans in large mech suits, so they worked with Joes except that they had no monsters to fight in their suits that were clearly designed to fight monsters.

I remember tuning in to the initial five part miniseries – The Evil That Lies Within – back when it first aired, but I don’t remember the eight episodes that followed. It was produced by Sunbow, the same company that made GI Joe: A Real American Hero, but I don’t remember it being as good. I haven’t bothered tracking the show down. I assume I will someday, especially now that I’m making headway on the toy line.

Check back Wednesday if you’d like to know what I would do if I was in charge of a modern Inhumanoids revival.

I was either a master negotiator or exceptionally whiny when I was ten because I had bits and pieces of a bunch of toy lines. Mom insists I was a good kid, so I’m assuming I finagled her with the promise of doing chores.

This line featured larger scale figures with big pieces of armor, accessories, and weapons that plugged into ports on their bodies. Looking back, they had a lot of play value but weren’t the most exciting-looking toys. Shockingly, the Centurions got sixty-five episodes for their cartoon series versus the thirteen that were produced for the Inhumanoids.

For more on Centurions, check out Kalan's excellent Best Cartoon Ever (of the month)!

Chances are I’ll revisit this topic and look at other years, but be sure to check back next Monday for my post about the movies of 1986!

If you want a chuckle, check out this poorly-informed article about the top-selling toys from Christmas in 1986. Five inch GI Joes! Planes that turn into trucks! Madness!

Also, join the Needless Things Podcast Facebook Group and get in on the conversation! Let me know what you think!