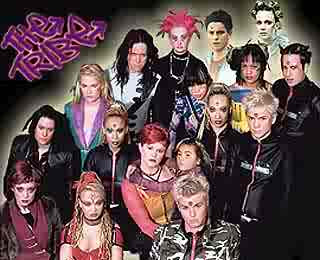 I’m an avid gamer.  Most of you know that by now if you’ve read any of my pieces.  One arena of gaming  that I loved was writing RPGs.  Including gaming, role-playing, and writing, they threw in everything I love in one neat package.  While creating a new proboards with a former friend of mine many years ago I struggled with the image I wanted to use as the avatar for a new character I was creating.  She sent me the screenshot from a TV show that she watched regularly of two men; the show’s town Sheriff and his temporary Deputy.  I loved what I saw; the bright colors of the background and the gothic/apocalyptic look of the characters.  But I had no clue what this show was.  My former friend thought I was from another world for being unfamiliar with it, but she pointed me to the TV Channel that I could catch it on.  I gave it a try and never looked back.  My former friend and I may not be on speaking terms anymore, but I will forever thank her for introducing me to this show.

“The Tribe” is without a doubt one of the best post-apocalyptic shows out there.


The world is full of shows about the end of the world.  From zombies to nuclear winter, everyone has their own take on “the end.”  But shows like “The 100” and the Netflix original “Between” wouldn’t have existed without this predecessor.  “The Tribe” was the first of its kind to ask how the world would have fared if only the children were left behind to pick up the pieces of its shattered aftermath.
Filmed in New Zealand on the same sets as most Power Rangers series, “The Tribe” focused on the fallout and recovery of the world after a mysterious virus of unknown origin wipes out every adult eighteen and over.  Rapidly aging and killing them, the adults did what they could to prepare the children for their new place in the world, but in most cases it wasn’t enough.  The story focuses on one specific city, showing the struggles of its children who, in order to survive, have formed tribes to keep them all safe in their newfound chaotic society.  The main character focus of the story centers on the formation of, maintaining of, relationships of, and rise to power of, one specific tribe:  The Mallrats.  Aptly named by their Chief of Security, Lex, because they reside in the city’s Mall, the group spend the first few episodes slowly coming together by sheer accident.  As you watch more of the show, however, you realize how much deeper this story goes than just the characters.

In Season One you see scared children.  Some are bullies, some manipulators or heroes, and some are simply driven insane by their grief and loss.  But you see how the state of the world quickly makes them all grow and change by necessity.  They quickly realize that they have to ration food.  When you don’t wash dishes, rats will show up.  They develop a water filtration system and create cleaning rosters for the Mall.  They set up security and organize parties to search for supplies and medicine.  Almost overnight, several grow from children to adult emotionally.  They grow from distrusting survivalist to family.

Others, however, continue to be annoying and childish.  While Amber, for example, becomes the tribe’s leader and the most level-headed, their Chief of Security, Lex, remains boorish and chauvinistic with anger management issues.  It takes him much longer to grow up… but doesn’t it for most men?  They aren’t the only characters you see develop.  Many come and go and they all have backstories that explain not only how they got there, but why they are the way that they are.  You see the genius of the tribe’s tech savvy Jack as he helps beef up Mall security, only made stronger as he becomes best friends with the equally intelligent Dal.  You see the tribe’s spirits lifted on dark days by their resident “spiritual guru” Tai-San, who lives her life by the way of karmic energy and making sure ones chakras stay in alignment.  There’s the enigmatic Bray, emotional and strong, who becomes not only co-leader with Amber, but one of the most prolific figures in Mallrat history.
And then…there is maniacal Zoot.  But he is an entirely different story.  Heck, he is an entire universe to some…
The colorful characters each add a different spice and variety as well as a different reason to root for the Mallrats to survive.  Their stories intertwine with each other and their backstories endear you to them.  Even the hateful, horrible Lex, whom most can’t stand for the first two seasons of the show, grows on you.  Once you hear his story and learn why is the way that he is and see his journey, he becomes a favorite as you see the potential for a good man hiding there.  He was always a favorite for me.

As the show progresses you see more than just survival skills being employed and more than just character development.  The tribes of the city, The Mallrats specifically, reinvent Government.  They create a court system, a Police force, Tribal councils where leaders can gather and discuss city matters, and organize voting for a City Leader.  They reinvent money and an open, free-market economy based trading market.  This show did such an amazing job of showing what young people could do on their own that the UK Parliament recommended it as must-see educational programming for youth.  That’s saying something, people.

The show didn’t stick with just survival.  They dealt with issues that any teen had to face in the real world, but in this one they had no help to get them back on the right path when these normal problems ran amuck.  They might been the “new adults,” but they were still teens that needed and wanted guidance.  Drinking, addiction, pregnancy, relationships…these were various undercurrent themes that were addressed throughout the show.  It makes the subjects punch the viewer in the gut even harder than normal in my opinion.  Picture a teen giving birth in that world, scared and wanting a mom that she could never have with her again.  That would make anyone think twice.

The show ended with five seasons in 2005, but it still has a strong following with many “Tribal Gatherings” around the world.  I myself worked on the “Tribe Track” that proceeded the Apocalypse Rising track at DragonCon, which centered around this very show.  “The Tribe” official Facebook page even hosts online Tribal gatherings with online Q&A from the cast and other surprises.  For the die-hard fans, the best part was that they recently chose to keep the show going in written form.  Cloud 9, the production company that created the show, continued the show canonically in the form of the Season Six book series, written by author AJ Penn.  The first two books in the series have already been released and it changes everything the fans thought they knew about the origins of the virus, and about the Season Four villain.  The rights to produce a movie about the TV show have recently been purchased from Legendary, the same company that owns Felicia Day’s Geek & Sundry.  Big things on the way, people.  Big things. 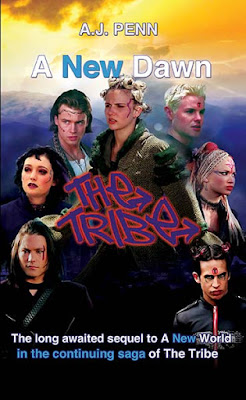 If you dig post-apocalyptic vibes I couldn’t recommend a better one.  A different take on a typical world with so many characters to root for.  Each are vibrant and alive and enrich the world of the show.  The story grows as the characters do from season to season and you watch these people morph from frightened children to determined survivors.  It’s a show you won’t regret watching.  Below is the official link to the Cloud 9 Official Youtube page, where they have uploaded all five Seasons of the show for legal viewing.  I’m also linking the Tribeworld web site where you can look up more content, including character bios, behind the scenes stories, Tribemaster posts (He is a scary dude,) and a shop where you can buy the Season Six books.  You can also purchase them from Amazon if you so choose.

Tribeworld: The Tribe's Official Site
Join “The Tribe” fandom and, as they say in the show, Keep The Dream Alive.