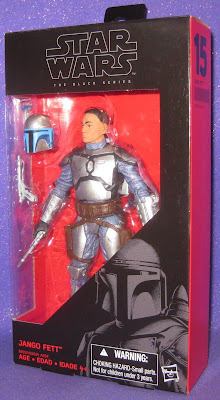 It’s been a while since I’ve said it, but I am not collecting Hasbro’s 6” Star Wars Black figures. 3.75” super articulated figures are my thing and judging from the last year of Hasbro’s offerings in that format I’ll be saving a lot of toy money in the future.

Having said that, there are certain characters that I will collect in any format that appeals to me. And those characters are Mandalorians. Boba Fett more so than any others, but any toy garbed in Mando armor is going to get at least a look from me. I picked up both versions of the Black Series Boba Fett and have been looking for this Jango for a few months now.

Boba is my favorite thanks to his distinctive, mismatched armor and the amount of character expansion he got thanks to authors like Karen Traviss in the Star Wars Expanded Universe, but Jango is technically more important to the Saga. Not only did he have more significant screen time than his son, he was the template for the entire Clone army, as well as the head trainer.

In addition to being a key player, Jango was portrayed by actor Temuera Morrison. Morrison starred in one of the few family drama-type movies I have ever truly enjoyed, Once Were Warriors. It’s about a Māori family in modern (at the time) New Zealand dealing with their marginalized status and it will make you cry. He’s been in plenty of other stuff, too, but the man is a powerhouse in Warriors.

I also met him briefly at Dragon Con and had him sign a Jango figure. He seemed like a really fun guy and he dug my mask. So there’s that, too.

I own several Jango Fett figures and they’re all pretty good, having come in the post-2002 era of Star Wars toys. But this one definitely stands out. The armor looks more lived-in and the small details just look better.

I don’t know why, but I don’t like The Force Awakens Black Series boxes as much as the older ones. They just seem kind of dull. Normally I’m a fan of red and black color schemes, but not in this instance. Maybe if the “Star Wars” logo was in solid foil or something.

Still, this does the job. You can see enough of the figure through the window to decide if it’s appealing or not and it does say “New Product”, though I don’t know how long that shine is going to last with all of the peg warmers that are already popping up. Anyone need a TIE Pilot or Constable Zuvio?

The back features a brief and inaccurate bio of Jango in FOUR LANGUAGES. That’s too many. The bio claims that Fett’s armor conceals his scarred face, but… uh…

I wouldn’t refer to that as a scarred face. There are two scars that I can see and they’re not exactly epic. I think “Conceals his face, which bears a couple of minor scars” would have been more accurate. Especially considering the fact that figure has zero scars, minor or otherwise.

The sculpted likeness of Temuera Morrison is great. I might’ve liked an expression that was more stern and less stoned, but that’s the fault of the paint. Speaking of which, those eyebrows are rough. They’re ultra-black and a bit off-center and just look bad, even when you’re not examining a close-up picture. The hair looks better in person than it does in the picture, though. The paint on the eyes isn’t super. He has a kind of Igor lazy eye thing going.
Jango’s armor looks fantastic. The sculpting is very sharp and defined, giving the plates weight and a feeling of substance. The silver paint is shiny, but not too shiny. There are some spots of sculpted and painted damage, giving them a look of functionality and a sense of being lived in. This armor has stories and the people that designed the figure were aware of that.

I learned all about Mando armor when I made my own a few years ago. There are more pieces and layers than the casual observer realizes. That’s why I like how Hasbro handled this figure so much. Jango’s flight suit has been many different colors across many different action figures – everything from lavender to purple to light blue. I don’t know the color of the actual costume, but this figure’s suit is what Jango looks like in my head. It’s powder blue with a thick, dark wash of what’s almost a dark lavender. It looks great and captures the color and texture of the movie suit nicely. Over that is the vest that the armor plates are attached to. It’s dark, glossy grey and clearly a different material from the flight suit. More of a leather or vinyl type thing. I love the way the shoulders are done. The openings in the vest where the joints are situated are large enough that the plates slide into them when you’re posing the figure. It might not be quite accurate, visually, but it means the figure has a full range of motion at the shoulders.

Jango’s gauntlets naturally hold all of the gadgetry that you would expect from a Mando warrior. The left has a flamethrower and fuel lines that “disappear” under Fett’s upper sleeve.

The right has mini rockets and other sculpted doo-dads that I can’t remember the purpose of but that look great. It also has supply lines running up into the sleeve.

The detail on the gauntlets is great, but not quite as sharp as I was expecting. They look good, but not so much better than the smaller figures that I feel like I’m seeing more parts.

Jango has a very distinctive belt and holster setup. He has the same belt full of pouches as Boba with the wrapping underneath, but sports two low-slung holsters for his blasters. This combined with Jango’s matching armor and overall brighter colors gives him a more together, soldier-like aspect than his son. The sculpt on the figure’s rig is great, with flaps on the pouches and eyelets on the holster straps, but the paint is minimal. They actually stand out against the rest of this figure’s very good paint job and feel a bit bland and tacked-on. They should have some texture or a dark wash to suggest leather. Given the attention to detail on the rest of the figure I’m rather surprised these look so plain.

The figure’s lower legs look great. The kneepads have all the weird stuff on the sides and the greaves have some extra paint to suggest more dirt closer to the ground. The shoes are excellent, with painted detail on the soles to give them a lot of extra personality. The treads look great, as well.

Jango Fett comes with a helmet, a jet pack, and two WESTAR-34 blasters.

For the record I am not a fan of the blasters from the prequels. They look too sleek compared to what we saw in the Original Trilogy. Rather than basing them on existing weaponry the filmmakers sculpted all-new designs and they stand out like sore, silver thumbs.

Fett’s blasters do look like their movie counterparts, even sporting some paint on the grips. I may not like the design, but they look like they should.

They fit perfectly into either of the figure’s hands or into the holsters. The holsters are so narrow I was concerned that the blasters wouldn’t stay put, but they work just fine.

Jango’s bucket is very nice. The paint scheme matches the rest of the figure and it’s a firmer plastic than I tend to expect from Hasbro helmets. The paint is very clean and there aren’t any smudgy bits you can see through. I am disappointed that the rangefinder doesn’t pivot.

The jet pack also has a fantastic paint job. It plugs into holes in the figure’s back armor plate and stays put nicely. My only issue is that it’s made out of a softer plastic and that both of the nozzles on mine were bent.

The figure has great articulation. All of the joints and hinges and whatever that you might want on a twelfth scale figure at this price point are present. The ankles are limited by the placement of the greaves. There is an actual swivel joint on the bicep rather than at the top of the elbow to accommodate the sculpt of the fuel lines. It works better than the elbow swivels normally do and is aesthetically fine because there’s actually an extra sleeve there on the costume.

Jango is good enough that I’ll leave him on the desk for a while. Particularly considering that I don’t have and haven’t played with many other 6” Black Series figures (two – the aforementioned junior Fett and Darth Vader).

This is a very good Jango Fett. If you are excited for a twelfth scale version of the character, for twenty bucks this figure won’t let you down. 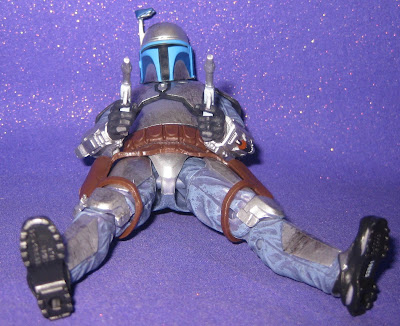