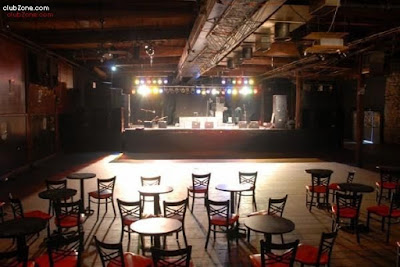 Yeah, I know it’s been a while, but I think it’s high time I continue my tales from The Masquerade. Especially considering it hasn’t actually, you know, closed.

This series of reminiscences was sparked by the news last year that one of Atlanta’s best-known and most diverse music clubs was closing. Now, this news has hit every couple of years for the past two decades, but this time it seemed more legit.

As of this writing the venue has shows booked through August 16th, so it looks like they aren’t going anywhere.

Regardless, I still have stories to tell about my time working there twenty years ago. You can catch up by reading Part 1 and Part 2 if you haven’t already.

When I left off last time, I was still a security peon – the lowest rung of Masquerade employment except for the cleanup crew (although we did some of that, as well). This starting position’s responsibilities consisted of “roaming” during open hours, setting the club up, and loading the bands in and out. There were other things here and there; it was essentially a job where you just did whatever you were told.

This is how I ended up taking Lemmy’s boots to be repaired.

Not everyone that worked at the club had a car. As a matter of fact, I think most of my co-workers were hoofing it. I didn’t live near the club or even downtown at all (yet), so I had a vehicle. This meant that every once in a while I would be asked to drive somewhere to run some errand. It could be anything from picking up some specific thing from a band’s rider (the portion of the contract between the performers and the venue that listed the “needs” that The Masquerade hadd to meet in the backstage area) to getting nails to fix some problem around the building.

One time I had to drive all over town to find some specific brand of cider for The Business. I don’t remember what brand it was, but nobody stocked it. I spent a couple of hours driving around and must have hit fifteen different liquor stores. Keep in mind that this was 1997.
Cider was not the thing that it is now. Some of those stores didn’t carry any cider, let alone “Stoutbloke’s Apple Fist” or whatever the hell I was looking for. On top of that, we didn’t have cell phones or GPS or anything. So I was having to find these places and navigate to them using phone books and a map. I also couldn’t just call the club from my car to tell them, “I can’t fucking find this stupid shit”. I had to find a pay phone to do that.

My favorite gopher job was delivering Lemmy Kilmister’s boots to the cobbler to have them repaired.

There was a lot of excitement surrounding Motörhead’s show. The band had a reputation at the club for being great to work with and 96 Rock – a local radio station – had held a contest to win entry to a pre-show party with Lemmy himself. Obviously we had shows almost every night, but this was one of the ones that felt like a true “event”.

I’ll get into specifics in Part 4, but for now I’ll just say that we typically reported to work in the late afternoon to do what we needed to do to for show setup. After arriving I was summoned up to Barbie’s office, which had never happened before. I mentioned in a previous post that Barbie was mostly nice to me, but she was a mercurial character. You never knew how any given encounter with her was going to go. I was understandably nervous.

The trip up to her office didn’t help. It was at the top of a dark stairwell behind the kitchen and it felt sort of like ascending to some crazy wizard’s tower. Fortunately I saw Kenneth, the Head of Security, on my way up and was able to ask him what was going on.

“It’s no big deal – she wants you to take Lemmy’s boots to get them fixed.”

I was relieved. And excited. Lemmy Motherfucking Kilmister’s boots! Wow! Would I get to meet Lemmy? Maybe we’d share a beer as he explained what sort of repairs his footwear required. Perhaps he’d be so impressed with my boot transporting skills that he’d take me on the road as his personal shoe assistant and I’d be able to ride the global path at the side of the legendary Motörhead, drinking exotic drinks, hearing exotic music, and making love to exotic Rock Chix the world over!

I had ridiculous thoughts like this all the time.

Side Note: I still do.

Now, many of you reading this probably know what Lemmy’s boots look like. He’s worn lots of different kinds, mostly variations on cowboy boots. But I’m not talking about those.
When Kenneth said, “Lemmy’s boots”, I was picturing some kind of combat boot. Big ol’ shitkickers with studs and steel-capped toes. Badass MAN boots. When I got to Barbie’s office, she handed me these: 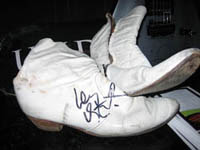 It was one of the biggest surprises of my life. And they were tiny. The internet reports that Lemmy was 5’10”, an average height, but his shoes really did look like elf shoes.

Barbie gave me directions to the shoe repair place and I put them and Lemmy’s Boots in my pocket and headed downstairs.

I did not actually put Lemmy’s Boots in my pocket.

They were way too small – I would have lost them in there.

When I got to my car, I put Lemmy’s Boots on my passenger seat and just sat and stared at them for a while. Not because they seemed so startlingly out-of-character to me, but because they were pieces of rock history sitting in my car. How many stages had the trod upon? How many sonic waves of rock had pounded them? How much and what kinds of alcohol from all over the world had been spilled on this curious footwear? How many women had been penetrated with these boots standing below? How many filthy rock club bathrooms had they walked through?

I suck at directions. Up until the point when GPS became common I could never find anything on the first try. Driving around Downtown Atlanta vexes me to this day due to the cramped streets and bizarre layout. I probably passed the shoe place a few times before I finally figured out where it was. Once I did, I dropped Lemmy’s Boots off and went back to the club.

I know that part was kind of anticlimactic. I don’t even remember walking into that store, just driving around trying to find it.

By the time I got back to the club the special VIP party had started. Before I was even at the front doors I could hear Motörhead playing over the speakers in Purgatory (the bar area). Someone was singing along, loudly and well. As I passed by the open doors I saw Lemmy sitting at the bar, surrounded by leather and denim-clad rockers, belting out “Stay Clean” along with the recorded track.

Side Note: I don’t actually remember what was on. That’s just one of my favorite songs. And it’s not like I’m going to pick “Ace of Spades”. Come on. You wouldn’t have believed that timing for a second.

I don’t know who went back for Lemmy’s Boots. I had to go straight into getting the club ready for the show.

That’s one of my favorite memories from my time working at The Masquerade.
Oh, I forgot to mention that Motörhead was sharing the bill with W.A.S.P. and the Impotent Sea Snakes. This is important for two reasons.

First, the Impotent Seas Snakes owned The Masquerade. I’ll get more into that in another post, but for now just know that they are a very, very dirty and entertaining band that you absolutely should not Google at work unless you already have another job lined up. It made for an interesting work environment and as a result the times when they played at the club were a HUGE deal.

Second, W.A.S.P. is a band known for rousing tunes like “Animal (Fuck Like A Beast)” and “King of Sodom and Gomorrah”. Their singer is named Blackie Lawless (because of course he is) and has been touring almost nonstop since the band formed in 1982. I don’t know what his wardrobe consists of now, but in 1997 he wore rubber pants on stage. I know this because one of my co-workers had to hose those rubber pants out after the show. He said it was the most revolting experience of his life.

These are the things we did to keep our cool jobs at the rock n’ roll club.

Next time I’ll talk more about the actual job and share some more band stories.

Thanks for reading. If you have your own Masquerade stories to share, do it in the comments below, join the Needless Things Podcast Facebook Group, or drop me a line at phantomtroublemaker@gmail.com.

Email ThisBlogThis!Share to TwitterShare to FacebookShare to Pinterest
Labels: Motörhead, rock n roll, tales from the troublemaker, The Masquerade