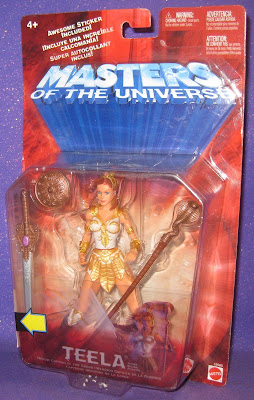 These Four Horsemen-designed updates to the classic characters are the ones that I find the most aesthetically pleasing. While I admire the thrift and ingenuity that went into the shared sculpt concept of both the original toy line and the more recent Classics, the (mostly) unique sculpts of the 200X line are where it’s at. Each character is so distinctive and detailed that I would rank this as one of my favorite toy lines ever.

Since I’m essentially done with the Classics-style figures I decided it was time to fill in some holes in my 200X collection. I put a lot of effort into collecting the line when it was in stores, but it’s as famous for poor distribution as it is for excellent sculpts, so there are a number of figures I still want that I couldn’t find back then. As of this writing, here’s who I(and what) I’m missing:


That’s not a bad list and for the most part you can find toys form this line for fair prices. I’ve even found complete loose samples over the past couple of years.

Up until Joelanta a couple of weeks ago Teela and Rattlor (called The General) were missing from my collection. One of the dealers had them carded. I waited until Sunday because one of the nice things about collecting older toys is that there’s no rush. Just as things were closing up I made an offer and they took it.

If you don’t know, the last day of a con is almost always the best day to buy. If you’re looking at an item that you know you’ll be able to find later it always pays to do your dealing then. I’ve talked people down to half of their asking price just because they don’t want to haul things back home or to their stores.

Of course, you’re also running the risk that the thing you want will be sold or the dealer might pack up early and not even be there for most of the last day. But like I said – with older mass-market toys that’s a risk you can usually afford to take.

I can’t remember how I got the figure, but I have Snake Teela from this line. It’s a neat, canon variant with an excellent paint job, but I have been annoyed for years by the fact that I had that one and not the regular Teela. Now I can finally let that go and find something else to be annoyed by. Such as my new disdain for Marvel Legends.

This is a striking figure. The red hair with the white tunic and metallic gold trim and armor make for quite an eye-catching design. This figure has so much more personality than the Classics Teela.

I’ve always felt that the 200X blister card looks extremely busy and cramped. Most of that is due to the trilingual labeling, something I never like on toy packaging because it presents a whole bunch of extra stuff that is not relevant to my toy purchasing. But I get why it’s there and, as you know, I don’t care too much about packaging anyway because it’s all going in the trash.

The blister covers not only the figure, but the brand logo. This creates a neat look that makes the product seem a bit fancier than just a logo printed on the cardback. More on that logo in a bit.

The Action Chip is something that I had completely forgotten about this line. Many of the figures had chips that would activate a sensor in the Castle Grayskull playset and trigger various sounds. I’ve never heard any because I don’t own this Grayskull (yet), but I’ve always been fond of this simple technology. I think Playmates’ Simpsons toy line might have been the first to utilize it effectively. I had a huge number of toys from that line. The interaction worked well and the sound was about as high quality as you could expect. The Phantom Menace figures also had that Comm Tech thing. I never bought a reader because I just didn’t care. If you don’t know, Episode I isn’t the most quotable movie ever.

The back of the box features some standard fare and a huge clutter of words.

Alright, let me get the pose out of the way first.

I’ve always said that I prefer that figures be in neutral poses. I’m not usually a fan of “dynamic” or “action” stances. Teela’s pose looks pretty neat in the box, but once you get her out of there it’s kind of strange. It looks like her forefingers should be extended, like she’s in mid-“Heyyyyyy, whazzup?” Her torso is also sculpted in a turn, so when it’s centered over her waist her boobs are slightly askew. You can’t ever get her facing forward quite right.

All of that is by no means a deal breaker and honestly, after Teela has been on the shelf a few months I probably won’t even think about it. But it is awkward.

Teela’s face is a little sharper than the animated version, but it looks great. Again, there’s a lot more character here than on any other version of the character. The hair is a combination of head sculpt and separately sculpted attachments. It’s wind-swept, but not obnoxiously so. I dig it. The paint is fantastic. The colors are vibrant and the application is clean. Teela’s tiara and earrings match the color of the rest of the gold on the figure. The facial features are crisp and animated, giving her the same bemused expression as the cartoon Teela.

The torso consists of a base sculpt with a separate soft plastic piece to form the collar and upper torso. This creates a nice effect where it looks like the figure has clothing and armor as opposed to it all just being one sculpt. Teela’s skirt is also soft plastic. It matches the other parts and hangs low enough to cover the hip joints; not that that would be an issue with this figure since the joints blend nicely into the sculpt.

The back is packed with sculpted detail – there are tassels hanging down from the soft sculpt, as well as a loop to store Teela’s sword. I like the sculpted rivets in the plating. I am amused by the butt-shaped leaf on her butt.

Teela is sporting highly detailed bracers and arm bands on both arms. The sculpting is great and the paint is applied well.

Teela’s knees match her boobs, which is funny. This figure’s entire below-thigh situation is vastly superior to the Classics Teela. The kneepads are awesome, but the entire design on the boots is great. They’re still kickass, but more feminine. Does it make sense that she keeps her pouches on her right foot rather than her belt? I dunno, but it looks cool and compliments the asymmetry of that is a hallmark of this iteration of Masters of the Universe. A little paint there might have been nice, but that’s Mattel.

I want to reiterate how much I love the bright, metallic gold coloring on this figure. It stands out beautifully on the shelf and makes Teela remarkable among a line of remarkable figures.

Teela comes with a staff, a sword, a shield, and a Masters of the Universe sticker.

I mention the sticker because for kids, getting a sticker with an action figure is rad. For me, it is also rad. I love little extras like this.

The staff is Teela’s traditional snake staff. It’s nice and straight and actually has two colors. The shaft is brown and the head is a bronze that matches the other weapons. I appreciate the decision to make these pieces a different color from the highlights on the figure.

Teela’s sword is comically huge. This actually comes in handy, which I’ll get into below. The sculpt is excellent and the hilt is very pretty. Another case of kickass femininity. IT has three colors and is a heck of an accessory.

It fits in either of the figure’s hands and the loop on the back.

Shields that don’t belong to Captain America or aren’t made of lasers are generally kind of junky. This one is just another clip-on shield, but it has some nice designs on the front that are just fancy enough to keep it from feeling plain.

It clips on just fine and stays put.

Mattel wasn’t setting any standards with articulation in this line, but the figures are still superior to the original MOTU line. Teela has a neck swivel, hinge/swivel shoulders, wrist swivels, and hinge/swivel hips.

There is also a swivel at the waist, but it is there to utilize the throwback “swivel attack” feature that the old figures had. There’s more of a gap there than I would like because of this feature. It isn’t bad, but it’s noticeable and I’d rather have a clean joint that that feature.
The hip joints don’t work all that well because of the cheap plastic used there. It’s soft and doesn’t move well. That’s okay, though, because Teela won’t stand up unless you have her legs in exactly the right position. Because of her pose, she has weird balance. The easiest way to get her to stand is to put her sword in its storage loop. That balances the weight. Of course, the problem with that is if you have her holding the sword she is way off balance.
Regardless, this is a figure designed with fun and aesthetics in mind. It’s nothing I want to leave on my desk to mess around with during podcast recordings, but it has enough going on that I think kids would like it.

If you’re collecting 200X Masters figures, Teela is a must-have, regardless of quality. Fortunately, aside from a few small decisions that I don’t agree with this is a very good figure. Definitely my favorite Teela in my collection now.