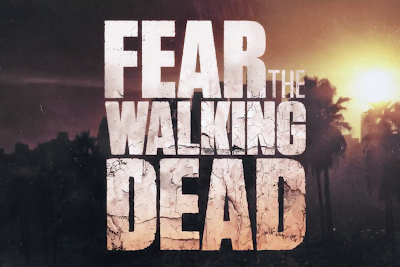 AMC should fear dropping ratings, and it should fear their lack of character development. Mostly it should just fear that it's become my new Nyquil. Through all the ups and downs I've stuck with The Walking Dead. And it's not even that I'm a comic snob. Yeah I've been reading since close to the start, but I got past all the twists and changes of the show. I just can't get behind Fear the Walking Dead no matter how much I try. I want to love you AMC zombie shows, why won't you let me love you?

I had my own misgivings about Fear when it was announced (read more here). If you don't want to read what I wrote way back then I'll just sum it up by saying that I didn't need it. The Walking Dead was a universe I was already sold on by the comic, TV show, and (the good) video games. I didn't need another angle, but I wasn't opposed to it. I'm still not. I do have a problem with the story-telling though. It could be that I have learned to forgive the same issues in the first show, but am not invested enough in the new one to let shit go. That's highly likely, in fact. But then it could also be that before The Walking Dead got gimmicky and lame it hooked me with good characters, and a great story.

What's gotten really annoying about The Walking Dead is everything that's wrong with Fear the Walking Dead. Not the pointless cliffhangers or sending Carol away, yet again. It's mostly that I don't give a fuck about who these people are or whether they live or die. Mostly I just want them to die. That junkie kid, his entire family, that black guy who isn't Tyreese but kind of looks like him. I care more about what's happening on the airplane in those between commercial vignettes than I do about anyone on this show. And that's not to say it's been all bad. A lot of it had real potential. Unrealized yes, but potential all the same. I was hoping it would go more World War Z, and maybe show what other people were going through around the country or the world. It could have been cool with a different group of survivors every season or something like that. Or borrow from Left 4 Dead 2 and have groups cross paths once in a while on their respective journeys. I could have even dealt with an off-shoot group from Atlanta going west instead of north. I might have liked the show versions of Shane, Andrea, and Dale if they'd gone off on a separate adventure. Probably not, but maybe.

Here's what I got out of Fear the Walking Dead. It's a new group of people on the other side of the country. They are horribly flawed in many ways. There are teenagers who ruin everything, and parents who bail their dumb asses out of bad situations they got themselves in to. I got 3 episodes in before I got tired of taking naps. My brother convinced me that the last episode of the first season was worth watching so I watched it On Demand. I'll admit that I liked the idea of where they were thinking about maybe going with it. The main characters pack it up, and head out to sea. If you've read Brian Keene's Dead Sea you'll know why I found the idea interesting. If you haven't, and like zombie books, go read it. If you don't, and won't, then I'll just say that zombie whales are the best idea ever. And that will probably also tell you why I watched the movies Zoombies.

Sadly, there are no zombie whales, or sharks, or anything else cool. When you've got 6 or 7 people on a boat you're not left with little fat to trim so it's a sure thing that not a lot of people are going to die. I'm guessing there will be danger, and peril, and such. Since I still don't care about any of these assholes it's hard for me to get worked up about their possible fates. Your "next time on..." won't get me worried about what might happen to the angry teen who acted like a total dick this week. Bringing in Chris Hardwick for another Talking Dead won't get me either. I only ever bother to watch Talking Dead when someone good is on, and have been disappointed before. Could Nathan Fillion have contributed any less to the conversation? Why should I care about listening to actors and producers talk about a show that has yet to grab my complete attention? I'll give you production quality, zombie gore, and that shot of L.A. burning while they were headed out in the boat was pretty awesome, but what else have you got? I want to be on your side AMC, but you've gotta meet me halfway.

AMC hit it big with shows like Breaking Bad, Mad Men, and The Walking Dead. What they've been doing since seems more like trying to get lightning to strike a few extra times rather than working hard on really original content. Stop making comics in to shows, and go out and get us some new ideas. I'm sure someone has them. And if no one has tried to pitch Dead Sea as a show yet, then I'm calling Brain Keene. For real, people on a ship trying to survive against zombie giant squid? I'll take stupid over boring any day.


Beth got her start writing for a site called Movie Criticism for the Retarded (which has been reborn as dorkdroppings.com. Check it out sometime), but was pulled out of an early retirement to write for Needless Things. When she isn't writing she plays video games and watches bad horror movies while eagerly awaiting the zombie apocalypse. She may try to save her husband and/or their cats, but luckily hasn't had to make those tough decisions yet.