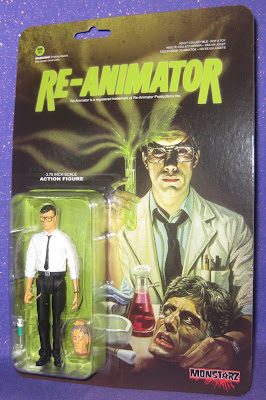 Re-Animator is one of my favorite movies. Stuart Gordon and Brian Yuzna’s Lovecraft-infused Frankenstein tale is unique among the droves of horror films about the undead. The visceral imagery and black humor combine for a cinematic experience that many successive movies have attempted and failed to mimic.

We horror toy collectors have been teased with the promise of Herbert West action figures for years. From rumors of his inclusion in McFarlane’s Movie Maniacs to NECA’s Reel Toys or Mezco’s Cinema of Fear line, West’s name has always popped up at least as a possibility. If I remember correctly (and my brain could just be making this up), I think SOTA’s Now Playing line of horror figures actually displayed a fully painted prototype plastic likeness of the incomparable Jeffrey Combs at Toy Fair one year, but the line was cancelled before the series he was in went into production.

Just a few years ago a sixth scale West was actually solicited in Previews by Executive Replicas. Many websites listed it for preorder, but it has yet to materialize.

In the interim, Amok Time has released images of a 6” scale Herbert West that is supposedly still coming.

And then, out of nowhere, Amok Time announced that there was a Monstarz 3.75” Herbert West and that he was available right now!

In the same way that they sprang their Crite vinyl figure on us last year, they had suddenly offered this action figure that nobody even knew was in development, let alone on the verge of being sold to the public! That’s almost unheard of in this day and age.

I jumped on the site and bought two of these the second I saw the announcement on Facebook. It didn’t matter what size or format it was, I was finally getting a Herbert West figure!

He’s simpler than a modern GI Joe, but a bit more detailed than Funko’s ReAction figures. I think he could actually hang out on the Joe shelf if he was in the back of Dr. Mindbender’s lab. But he’d stick out like a sore thumb with Pinhead and Jason and the other ReAction guys.

A beautiful old-school style blister card the same size as GI Joe and ReAction and other 3.75” figures. Which is good, because I have plastic shells for this size. The card features the same cover art as the Anchor Bay DVD release of the movie. It’s a beautiful painting of Herbert West and Doctor Hill and is perfect for the retro style of this release. It doesn’t say “Herbert West” on the front of the card, but his name is mentioned in the movie blurb on the back:

The image here is the same photo used on the cover of Elite Entertainment’s Millennium Edition, my preferred release.

Yeah, I’m sure these images have been used in plenty of other places, but I like that I can relate this packaging to things I own. Seeing new art or graphics on something like this isn’t quite as exciting as seeing a classic image that’s been in your life for decades.

The head looks oddly lumpy. It isn’t bad, it just looks kind of uneven at first glance. But it is recognizable as Jeffrey Combs. I’m not saying he has a lumpy head, but this sculpt works, even if it isn’t quite as clean as I’d like. The black paint on the hair, eyes, and glasses is applied precisely and looks good.

I’d go so far as to say the paint job on this figure is excellent. The shoes, slacks, and shirt all have different glosses and look clean. There’s no overlap or spatter anywhere, which is impressive for this scale. The narrow black tie against the bright white shirt is a great contrast and is painted with more skill than the big companies tend to employ.

It’s an odd thing to love, but I love the sculpt of West’s shirt. All of the folds and wrinkles are fantastic. The sculpted pocket and collar sit well and are more than just afterthoughts – they have depth and texture.

The rolled-up sleeves also look good. The one sketchy paint app is the watch. The black doesn’t quite cover the sculpt and it looks a little rough. Otherwise the hands are great, particularly the one posed to hold the hypodermic needle.

West’s shoes are a glossy contrast to his slacks. The detail on them is excellent. Laces and soles are well defined. The slacks are crisp and pressed. These are clearly suit pants and not just black jeans or something. I love this attention to detail.

The hypodermic looks great for this scale. It has a great sculpt and three clean colors. In a remarkable feat for a 3.75” figure, his hand was sculpted to hold this item realistically, rather than just sticking it into an open fist. Not only that, it actually fits perfectly and stays put! I’m very impressed by this.

The hand is holding Dr. Hills’ head by the hair. The head is, sadly, not sculpted to look like it’s shouting at or berating West, but it does look great. The hair looks appropriately messed up and has two shades painted on. The neck has a gruesome torn look with garish red painted on the bottom.

The figure has seven points of articulation, one of which is his removable forearm. I’m glad the designers gave the figure elbows because it just wouldn’t look good holding its items straight out in front.

The accessories add some play value and he has two extra joints over your standard “retro” figure, but this is basically just a guy to stand around. There aren’t any complimentary figures or a playset, so there just isn’t much for ol’ Herb to do. Still, for what it is and the spirit in which it was made, this is a solid toy.

Side Note: IT IS NOT A TOY:

If you’re a fan of Re-Animator, this is a must-have – you’ll be the envy of all of your friends. At $14.99 it’s a little steep, but what price can you put on owning your own tiny, little Jeffrey Combs?

This little guy scratches the itch and looks good on the wall or shelf, but doesn’t completely satisfy. I still want the six and twelve inch versions. Or, barring those, a laboratory playset and some more characters.

Buy yours now from Amok Time! (we don’t make any money from this link, but that’s where you get them)
Posted by Phantom Troublemaker at 11:00:00 AM