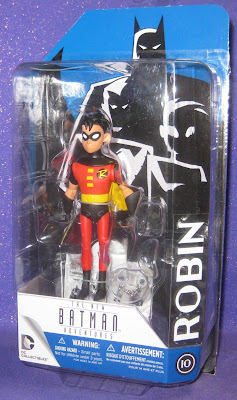 I honestly don’t know that I could pick a favorite Robin. It’s entirely possible that I have in the past for the purposes of making a point or for something that I was writing, but if I really sit and think about Tim, Dick, and Damian I find it hard to choose between the three.

Of course, when you’re talking about the DC Animated Universe Damian is not a factor.

Dick was first, but he was wearing Tim’s gear. When they introduced Tim, they de-aged him because to a certain extent Dick had been an amalgam of the traditional Dick Grayson and Tim, who was the current Robin in the comics. There needed to be differences between the two when the show time-jumped between Animated Series and New Adventures.

I was disappointed with the new Robin. I loved Loren Lester’s Dick Grayson, and even though he appeared as Nightwing in the follow-up series, he was not the constant companion that Robin was. After the cool, teen Robin of the original show it was hard to adjust to this little kid.

In cartoons, little kids had a long history of being incredibly annoying characters that were often nothing more than kidnap victims or the cause of the conflict for any given episode. From Scott Trakker to Spike Witwicky to any and every kid that ever showed up on He-Man and the Masters of the Universe, they were universally a pain in the ass.

Side Note: Yes – I know that Spike was technically a teenager. But he sure didn’t act like it. What an idiot. I didn’t like Spike until Transformers: The Movie, but then they introduced his even more annoying son, Daniel.

Showrunners seemed to think that the young character was a necessary portal into the shows, but everyone I knew hated these kids. That’s why it was so smart to use a teenage Robin for Batman: The Animated Series. A lot of the tone of the show actually revolved around there being a more mature Robin.

This new Robin was more than just a little kid, though. Voice actor Matthew Valencia brought an intelligence and spirit to the role that kept Tim from being another annoying kid. And he certainly wasn’t a victim. He was capable and tough and complimented Batman in exactly the way Robin should. So now, even just between the two Robins of the DC Animated Universe I have trouble choosing a favorite.

Like Batgirl, this is a tiny figure. With a big head. That is, of course, exactly what this animated Robin looks like. The proportions are spot-on and the colors are nice and bright.

This Robin has crazy hair. Like, Flock of Seagulls crazy. The sculpt is fantastically messy, with the whole mess swept up and to the left while those two trademark pieces hang down on the forehead. It has a lot of volume and creates so much personality for the character.
The ears and cheeks stick out, giving the figure that little boy look. The domino mask around the giant eyes is proportioned perfectly. All of the paint is clean and precisely applied.

Robin’s short cape is a separate piece of rubber or soft plastic that can be removed if you pop the figure’s head off. It’s sculpted turning in on the sides, which looks good. The yellow lining is painted perfectly and doesn’t bleed out onto the black exterior.

The details on Robin’s torso – the logo, laces(I guess?), and utility belt are all sculpted. It’s subtle, but they have depth. The paint application is very slightly off on the yellow of the “R”, but it’s not noticeable until you get really close to the figure. On the shelf, you’d never know. Robin’s trunks also have a subtle sculpt at the edges. I’m glad DCC paid attention to this rather than just painting along the lines of articulation. They’re going to a lot of effort to make sure these figures look right. There is a bit of confusion around the inside of that fugly joint, but when the figure is standing in a neutral position everything looks fine. And honestly, since this figure is smaller those hip joints don’t look as awful when it’s posed.

The boots are just painted on, but they look fine.

Similar to the sculpt on the trunks, Robin’s sleeves have a little extra work to make them look right. The red extends out onto the arm and there’s a sculpted extension of the main shirt piece rather than just black sleeves going into the shoulder joint. That probably would have looked fine to me, but pickier folks would have noticed. My issue is that the paint on the black sleeves is a little sloppy and doesn’t quite match the black on the rest of the figure. DCC is usually very good about this. But again – it isn’t terribly noticeable until you get up close, so I’m not losing any sleep over it. I dig the shape of the gloves. They stick out from the arms in an oddly satisfying way. The hands are sculpted nicely and match the color of the upper portion.

Robin comes with five extra hands, a Batarang, a grapnel launcher, Batcuffs, and a stand.

The extra hands are right and left posed to hold the Batarang, right and left open fists, and a right hand with an attached grapnel gun. They all match the gloves and are easy to switch out. The pegs are tiny and you should be careful, but DCC is using a different plastic from the initial wave that had the breakage issues. These kinds of parts are much sturdier now.

The Batcuffs are two plastic pieces connected by an actual metal chain. They should fit most regular-sized Animated figures, but you’re going to have to pop their hands off to get them on. There’s no opening mechanism like on Judge Dredd’s handcuffs. That’s okay, though, because everyone’s hands come off.

I suppose the Batarang is actually a Robinrang, because if you look you can see a sculpted line that creates the image of a bird’s head. Neat. The grapnel gun is two pieces and doesn’t serve much purpose since none of the hands can hold it properly, but I’m glad it’s here.

The stand is the same fancy piece of business the rest of the figures in the line come with. It’s too big and takes up too much shelf space.

For the most part Robin seems to be a little more poseable than some of the others from the line. Some of his joints bend a little deeper and those hips aren’t as fugly as some, I suppose due to his small size. He can achieve all kinds of cool poses. His head also has a good range.

The accessories all interact with the figure – and other figures, in the case of the Batcuffs – in a meaningful way and add to the play value.

I feel like I should say more here, but that’s it. He’s a fun little guy that compliments Batman and Nightwing (review coming soon) nicely.

Robin is great! If you’re not a fan of Tim’s or have eliminated him through cherry-picking, I suppose I can’t convince you to buy one. But DCC absolutely nailed it with this figure. He’s one of my favorites from the line so far.

If you have to buy one, buy from Amazon and help Needless Things pay the bills!: