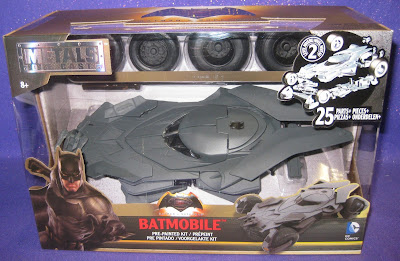 I wanted a toy of this Batmobile. Badly.

Mattel released one to go with their budget 6” figures and it’s okay. I got one for my son (don’t tell him – it’s a present) and it stands up to most of the twenty-dollar Batmobiles we’ve seen over the last decade or so. I’m actually surprised that it didn’t cost more than the $24.99 Toys R Us was charging for it.

At the same time I first saw that Batmobile, I also saw another one. One that was smaller and not the sort of toy that I generally give any attention. One from a company called Jada Toys, which sounded sort of familiar.

I don’t tend to spend too much time looking at the second-string licensed products from movies. I’ll check out the main lines of action figures from Mattel or Hasbro or whoever and maybe the role play stuff. Beyond that I don’t get into the puzzles and nightlights and puzzle squares that can’t be called Rubik’s Cubes that have stickers of the characters from the movie all over them. But this Batmobile caught my eye for a simple reason – it looked great.

As you can see above, the body of the car is clearly visible in the box. It looked to be loaded with detail and when I picked it up the heft suggested it was die-cast. Of course, if I had bothered to look at the box the gigantic, holographic logo on the top left says “METALS DIE CAST”, but I can’t be reading every single little thing on stuff all the time.

It even looked like the canopy opened, and I am a HUGE sucker for opening canopies.

I didn’t buy it that day because I was there for the Batmobile for my son and also because I didn’t particularly want to spend twenty bucks on it. But it became one of those toys that stuck in my head and that I kept thinking about. Also, there weren’t any other Batman v Superman Batmobiles coming out at the time and I really like this Batmobile design. As I’ve mentioned before I collect Batmobiles, and this one had to be in my collection.

Side Note: Yes, I am well aware that Mezco is producing this Batmobile as part of their One:12 Collective line, but I don’t know when it’s coming out and good lord, it’s bound to cost a fortune.

Eventually I took some Rewards dollars back to Toys R Us and grabbed one. I don’t build a lot of models, but I really do love putting things together. It’s an aspect of toy collecting that I miss quite a bit. When I was a kid, pretty much any vehicle you bought required assembly. Of course, there were plenty of playsets, too. Nowadays playsets are nowhere to be seen and more often than not any vehicles I might buy tend to be mostly assembled in the box. Not that I buy that many vehicles anymore, as GI Joe is all but dead and Star Wars has scaled theirs down to the extent that they’re just too small to work with my collection. The current Slave-I is barely a third the size of the one I have.

Of course, this Batmobile is too diminutive to fit in with any action figures, but I’ve got several different scales of the Caped Crusader’s ride so it doesn’t bother me.

Look at it! It looks so cool! That flat grey is tough and sleek and all of the panels and details look great. And it has clear windows. If I’m going to have an opening canopy, it had better have clear windows. This is a classy-looking product and I can’t wait to open it up and put it together.

Speaking of classy, this box is very nice. The arrangement of the body and the wheels displays without words the construction aspect of this toy. And then, of course, you’ve got the picture of the parts just waiting to be assembled. The shiny “METALS” logo is badass. It isn’t at all holographic like I said above, but I really wanted to say “holographic” and conjure up memories of those 80s National Geographic covers.

The back features a close-up of the assembled car and three feature insets. Two of those three are the opening canopy, so I really feel like Jada Toys gets me.

The box is a very thick cardboard and is not only fancy to look at, but fancy to hold. You feel like you’ve got a real, deluxe item in your hands.

Once you dump the box out there aren’t a whole lot of parts. I’m okay with that. I want to put something together, but I’m not a friggin’ engineer. There are two bumpers, four tires, and a few other assorted bits and pieces in addition to the body and the chassis. Jada thoughtfully included a screwdriver, which is amazing.

The instructions are simple to follow, to the point where words aren’t needed. There are only a couple of points of assembly where instructions are even needed. Everything fits together easily and I didn’t have any problems keeping parts together when I was installing the screws. The axles are different lengths, and it is difficult to tell which is which in the instructions. You can’t push the wheels all the way on, either. If you do they don’t fit onto the mounts. There are two little pieces that fit on the back just inside where the wheels sit. It took me a minute to figure out how to attach those.

Otherwise assembly was easy and rewarding. I put a thing together, but didn’t have to use any profanity while doing it.

Another thing that I like about this easy to assemble model is that it is pre-painted. There are only a few spots of paint here and there, but the Batmobile is essentially finished. All of the paint is applied to perfection. My days of custom painting are long behind me, but I would be interested to see what some of the incredible artists that are doing that sort of thing nowadays add to this. It would be neat to see different kinds of weathering.

While the paint is minimal, there is plenty of detail in the sculpt. The body is one of the more complex Batmobile designs and has all kinds of panels and layers. I am not a car guy and have no idea what is what, but There are several ports and fins and scoops all over. It’s cool. The entire body and both wheel mounts are die-cast metal. It’s solid and heavy and makes this whole thing feel like a quality piece.

There’s a plastic gun turret (I’m sure it shoots rubber bullets) on the front. It looks great and it swivels. I was afraid it would be fragile, but it’s fairly sturdy. That doesn’t mean you shouldn’t be careful, but it isn’t going to shatter and fall off when you touch it.

The chassis is a thick, sturdy plastic. I don’t mind the simplistic details on the bottom because I feel like Batman would have this thing sealed up. It’s not like he’s going to leave the brake lines exposed. As far as I’m concerned that’s all armor plating.

The wheels are plastic with rubber tires. The rubber is super stiff, so I wasn’t even sure it was rubber at first. But after messing around with the tires and having to remount the wheels after putting them on the wrong axles it was apparent. The wheels roll freely as long as you mount them properly on the axles. I like the color variation between the wheels and the tires because they don’t look like big lumps of the same material.

The canopy consists of two pieces. It’s a very cool design that is different from any Batmobile we’ve seen. The actual hatch portions are die-cast and the windows are a super clear plastic. I’m glad they didn’t use some cheap, murky plastic for these. Jada Toys seems to keep things top-notch all the way.

The interior looks fantastic. I was surprised at the level of detail inside given the scale of this thing. There’s a steering wheel, a central console and instrument panel, a gear shift, and as many doo-dads as I could want to see in this size of a Batmobile. The paint on the tops of the seats is a great touch that adds a lot of character and there ae two cylinders of some type between the seats with some silver and red. Just those three colors add so much to the cockpit.

Toy cars are not, in general, my thing, so I might not be the best judge of fun factor. But as far as this being a thing that you put together and roll around, it’s great. I probably would have enjoyed a slightly more complicated build process, but I had a good time assembling what was here. It was easy and at no point frustrating. It took exactly as much time as I wanted to spend on such a thing.

The end product is indistinguishable from a pre-assembled die-cast car you might buy from Burago or Mattel, but cheaper. To me that’s a deal because one of the reasons I would buy an item like this is for the assembly fun.

The functional cockpit and the unique way that it operates add some appeal. Obviously it would be more fun to have some figures to interact with this thing, but that’s not the kind of toy this is.

I love it! Sure, I’m just going to stick it on the Batmobile shelf and glance at it occasionally, but for twenty bucks I got to put a Batmobile together and keep a fine looking end product. I think this is a great product and I would definitely keep an eye out for other Jada models that might be up my alley. I’d love it if they got the license to do Bond stuff or vehicles from the Mad Max movies. This would be the perfect format for such a thing. I’m actually surprised it hasn’t happened.

If you like Batmobiles and enjoy putting things together but maybe aren’t the best at it, I think this is a must-have item.

Buy one from Amazon today! Every sale through this link nabs us a ha’penny!: