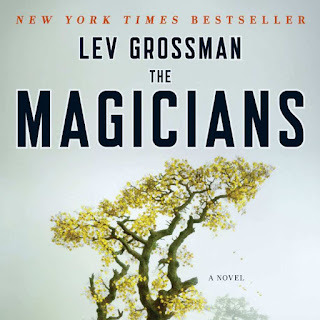 I know, puns are the lowest form of comedy. Lucky for me I never set the bar that high.

I've really been trying to get in to the SyFy show The Magicians. It just seems like something I should like. All magic-y and shit. I tried to get through the first episode twice without success. I'm not the busiest person on earth, but I don't have time to waste trying to force myself to like something. Then our friend Oz, who you may know as Sailor Moonpie from The Dirty Dirty Con Con Game Game Show Show, asked on a Dragon Con forum what people thought. When I expressed my inability to get through the first episode he asked me what about it I didn't like. I honestly didn't have an answer at that time. After finishing the first book I felt ready to give the show one more shot. I finally made it through episode one, but was just done by the middle of the fourth. I couldn't take anymore, and now I know why. 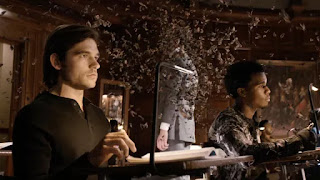 For those of you who are watching the show without reading the books I will keep this spoiler free. I am aware that the books just may not be for everyone; TV is much easier. Well, easier for some where this show is concerned. I realize I have something of a reputation for hating everything, but promise you I did try. For those of you who don't know anything about The Magicians or whether or not you should care I'll give you a short background. Magic is real, and there's a school called Brakebills that teaches a special few how to use it properly. Unlike Hogwarts not everyone who gets invited gets to stay. Ordinary sad nerd Quentin and his childhood friend Julia get to take the test. Quentin gets in, but Julia doesn't. We then get to see what happens to each of them afterwards. In the first book Julia almost completely disappears after this, but the show is giving us her journey as an illegal magician or "hedge-witch". Her story in the show isn't as dull as some of the other stuff they're doing so I'll accept the changes even if she doesn't really add anything. There's also a secondary "made-up" world called Fillory (which is shamelessly similar to Narnia) that Quentin is obsessed with, and may or may not be real. The author really could have tried a little harder, and if the show is going to lead us there it may be in even bigger trouble. The Narnia books didn't survive the big screen (I was so bored watching those movies I don't even remember them anymore), and the knock-off world probably won't do well on the small screen.

On to my first point. There are so many changes from the books. I'm not a purist about these things. I understand and realize that things get changed during the transition between mediums. What I don't like are so many pointless and needless changes. Maybe the show runners felt that they needed a female lead who was stronger than Quentin's mousy friend Alice or super bitchy Margo (who was Janet in the book. Another pointless change), but she's not very strong. If you watch a few episodes you'll probably understand why she goes away early in book one. There's a crazy hospital dream/other world sequence that lost me completely. I also don't need a Taylor Swift musical number, thanks ever so much. There's just so much stuff that's so off for no particular reason I can discern. Sure, trying to turn three books into a TV series is tough. You've got a pretty finite amount of material to work with, but do they need to go so far out of the way to make shit up so early? In the first four or five episodes you should still be setting up your world not fucking it up entirely. 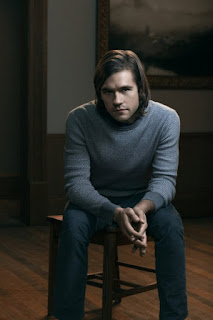 Second, and most bothersome: the characters are all horrible people. The main character Quentin in particular. He's supposed to be the "hero", and nothing about him is heroic. His friends are almost as bad. They're all one dimensional assholes with almost no redeeming qualities. Quentin is weak, selfish, cowardly, self-involved, careless, and egotistical. I'm fine with a main character who has a few of those qualities; as long as they grow or change by the end, but there's no growth with Quentin. He starts small, and stays small. When Julia doesn't make the cut to get in to Brakebills he just forgets she exists. He basically forgets that he has any ties to the normal world whatsoever. Sure he's become part of an exciting new world, but even Hermione happily leaves Hogwarts to visit her muggle parents once in a while. His best friend becomes a magic junkie, and he doesn't really even try to help her even when she begs him to get her another chance to get in to the school. He seems to "know" that he can't help. That makes sense. He's been at this school for a month so of course he would know all of the rules about how and why people get in and the criteria it's based upon, and is such an expert on magic that he thinks she'll be fine. The pathetic little speech he gives is really just him not wanting to be bothered because he's moved on to his sexually ambiguous new friends. His friends are also morally ambiguous, if more glamorous, and just as reprehensible as Quentin himself. The only character who has any good qualities is Alice, and without giving too much away, some very bad things happen to her. Bad things happen to pretty much everyone, but she's the only one who doesn't seem to completely deserve it. You would also expect all of this badness to make Quentin sack up, and quit being a bitch. As far as I've gotten in the books and show that hasn't happened though. I don't expect anyone to do a 180 and become a saint, but I do expect character growth. 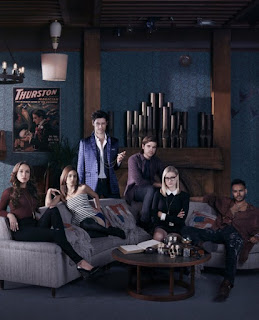 Yes, I gave up before even getting through the fourth episode. I also gave up on the books after the first one. I downloaded a sample of the second book, and Quentin's lack of development made me certain that I didn't want to invest another $12 on something that was pissing me off. Giving up when I did doesn't mean that it's horrible. It's still on TV, and the books have sold well so it must be right for someone. Some other people on the Dragon Con forum spoke well of it, so obviously it's not annoying everyone the way it did me. Maybe everyone is so happy to have some more magical shit to watch that they can look past the many flaws. As much as I miss magical worlds like Harry Potter I'm not so desperate for a new one (especially a bastardized Narnia/sexy Harry Potter) that I'll forgive all that's wrong with The Magicians. I stand by my meh.