So Long, and Thanks for All the Joes 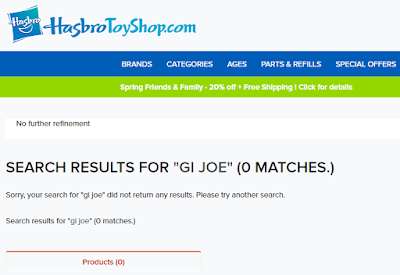 Friend of the site Gary recently sent me this article.

It references Hasbro’s plans for the separate Transformers and GI Joe Collector’s Clubs, mainly the fact that Hasbro appears to be ending their relationship with Fun Publications, who run the Collector’s Clubs and the related Cons.

I don’t actually know a whole lot about the Cons, as brand-specific toy conventions don’t tend to happen in Atlanta and my ability to travel is severely limited. I do know that the Exclusive items produced for the Cons and for the Collector’s Clubs are insanely expensive. The single-carded GI Joe Collector’s Club figures run from $25 to $38 apiece, which is well beyond what I’m willing to spend for a 3.75” Joe figure. This year’s Club Exclusive is Pythona, who I’d love to own, but not without the rest of Cobra-La. I didn’t even buy the Nemesis Enforcer Hasbro produced a few years ago because I had no faith they’d ever make more and you can’t very well have Nemesis Enforcer standing around on his own with the rest of your COBRA troops.

The point is that Hasbro sent out a sort of farewell letter saying to stay tuned for future news about the Transformers Collector Club and… that was it. Nothing about the Joe club.
Between that and Hasbro’s Toy Fair statement that there will be no new GI Joe product in stores for 2016, I think it’s time to give A Real American Hero leave for the time being. And I don’t think it’s unreasonable for Hasbro to put the brand on the shelf.

Er, pull it off the shelf. You know what I mean.

I don’t know about you guys, but last year’s 50th Anniversary offerings didn’t excite me. Out of everything they offered I wanted Gung-Ho and Low Light. That’s it. Everything else was repaints or minor retoolings or characters I just don’t particularly need. When I have notable gaps in my collection like Cover Girl, Dial-Tone, Iceberg, Cross Country, Crystal Ball, Raptor, Sneak Peek, Law & Order, Psyche-Out, and the aforementioned Cobra-La, I can’t get excited about the fourth repaint of Blowtorch.

First – yes, these are characters that to me are essential.

Second – yes, I know that many of those were offered as part of the Collector’s Club. But as I mentioned I am not paying north of twenty-five bucks for a GI Joe figure. Plus however much it was to sign up for the club in the first place. GI Joe is one of my first and best loves, but my heart will go on without Dial-Tone. Having said that, now that I have dabbled a bit in trading I would gladly trade a number of things I have for the above figures. 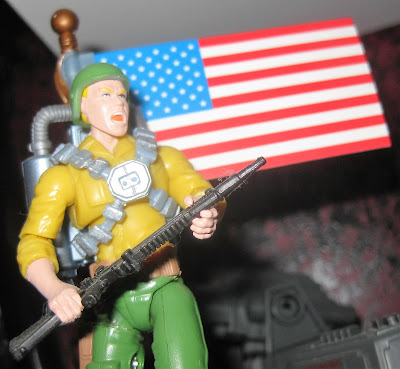 I don’t know if it would have made a difference if Hasbro had offered something different for the Fiftieth. I do feel like they should have had some kind of sixth scale Exclusive since that’s what the anniversary was actually for, but what was offered didn’t feel special or inspired. It felt like the best they could do with what remained of an ailing line that fans seemed to have lost interest in and the general public had forgotten. Because that’s basically what it was.

The social climate has changed and the world isn’t what it was in the sixties when GI Joe was first introduced or the eighties when GI Joe: A Real American Hero ruled the toy aisles. I feel like the military isn’t as aspirational and inspiring as it once was. Not to me, personally, but to the general public. I don’t want to get political, but so many of America’s actions over the last two decades have come across as non-heroic and have certainly been interpreted that way by the American media. 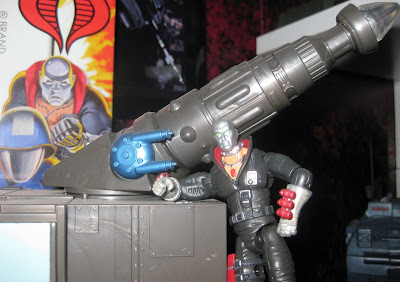 What I’m trying to say is that kids aren’t looking at toys of soldiers and tanks and thinking, “That’s awesome – that’s something I’d like to have adventures with!”

Unfortunately for the Joes, the brand isn’t as capable of adapting and evolving like other classic license such as Transformers or Teenage Mutant Ninja Turtles. It’s not its own entity in the way that Star Wars is and it has a narrower definition than superhero stuff. If you don’t like to play army, you’re not interested. If Hasbro removed the military aspect, it’s just a bunch of adventure guys. That’s sort of what they attempted with the last cartoon, and that was terrible. Well, I thought it was terrible. It got cancelled after one season and the related toys tanked, so what do I know? 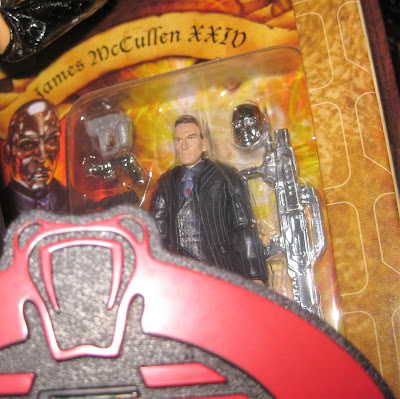 Of course, the biggest problem is that GI Joe does not currently have any affiliated media.
I thought Stephen Sommers did a fine job with the first live action movie. It preserved the wilder elements of the 80s cartoon while updating the characters and settings to something suitable for a popcorn-fare movie. I’ve written more than enough concerning my feelings about the tone of GI Joe and what it should be. Grim and gritty is not what I want. IDW’s comics, while well-written and featuring mostly nice art, were not what I wanted from the franchise. The 2009 movie was. 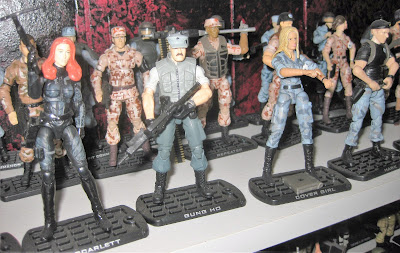 Many fans didn’t like it, though. I have no idea what went on behind the scenes or who decided what, but the sequel was very different. It was more drab and subdued, and the Joe team consisted of about six people that rarely shared screen time all at once. They did not feel like the world’s elite fighting force. I enjoyed the movie, but I hate it when the team is disbanded or decommissioned or depowered in some other way. It’s like when writers can’t figure out how to tell a good Superman story without using Kryptonite. It shows a lack of creativity and, quite frankly, respect for the franchise. 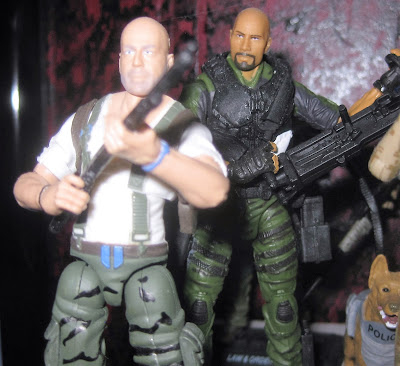 GI Joe: Retaliation didn’t set the world on fire. I think it did well enough, but the toy line – which is what we’re talking about today – had been suffering at retail since the glut of Rise of COBRA figures had been clogging pegs. The intermediate Pursuit of COBRA toy line was a high point in the history of 3.75” Joes, but Hasbro seemed to take a step backwards with the Retaliation toys. The vehicles from the movie were not exciting and Hasbro repainted several old vehicles that most of us collectors had already bought several times. The figures came with huge, overwrought gimmicks that detracted from the look. They were too toy-like for collectors and didn’t look fun enough for kids. I thought that the large accessories were a good idea when I first saw them, but in retrospect they were just more pieces of junk that should have been rifles or knives or something. It was very much the same thing as the junk Hasbro is currently packing in with their Star Wars figures.

A couple of years of repacks, repaints, retoolings, and 5,632 Cobra Commanders later and the little toy company from Pawtucket seems to have run out of steam on one of its greatest toy lines.

I don’t blame Hasbro for not knowing what to do with GI Joe.

Except that maybe they’ve figured it out.

In December of last year, Hasbro made the bonkers announcement that they were combining GI Joe, M.A.S.K., Micronauts, ROM, and the Visionaries (!!?!?!?!) into one shared universe. MASK (I’m not typing it properly because it’s a pain) and GI Joe totally make sense and Matt Trakker even showed up in the 25th Anniversary GI Joe toy line. Once that’s done, Micronauts and ROM aren’t too crazy because maybe after GI Joe nails down the terrestrial threat of COBRA, some extradimensional/interplanetary invaders show up to cause problems. The Visionaries might seem like the biggest stretch, but once you go extradimensional and also consider the holographic technology that was incorporated into a lot of the MASK gimmicks… Maybe this all makes sense.

Also, maybe I don’t give a crap if it makes sense as long as its fun.

A good writer (THIS IS KEY) can make anything work. I’ll tell you this right now and swear my life on it – Paramount could pay me half as much as they’re paying whatever goofball they have heading up this project and I could deliver them a golden script based on what I just said above. I don’t often shoot my mouth off, but I’m as certain of that as of anything I’ve ever said on this site. I’m sure there are plenty of writers around the world that could do an even better job than me. But I doubt Paramount and Hasbro have recruited any of them.

Side Note: They didn’t. We’ve got the guys that wrote Puss N’ Boots and Batman & Robin.

Don’t get me wrong – I’m one hundred percent down with these movies happening. I want them to be great and I want them to continue on and on just like Marvel’s movies have.

As far as a toy line – which is absolutely part of the goal for this undertaking – let me be clear:

Without knowing the nature of this shred universe it’s hard to speculate on what form a toy line might take. As with any modern toy line we have to take into consideration the expense involved with these things now. Vehicles are much smaller and simpler. Articulation comes at a premium. Whatever form this line takes, there’s a good chance that it won’t appeal to collectors. And it won’t be aimed at collectors because Hasbro undoubtedly wants to capture a whole new generation of consumers. Just because they’re using the brands we grew up with doesn’t mean they’re catering to us – they’re catering to our kids and counting on us recognizing what they’re doing.

That’s not to say we won’t get the equivalent of Black Series for GI Joe or special lines for Micronauts. But look at the current offerings in the toy aisle and I think you’ll get an idea of what to expect. I wouldn’t be surprised if we got an entire line similar to the tiny figures that Hasbro produced for Age of Ultron and now Civil War. There’s also the new Jurassic World line coming. The dinosaurs look great, but the human figures are straight out of 1992. That’s what’s happening now. 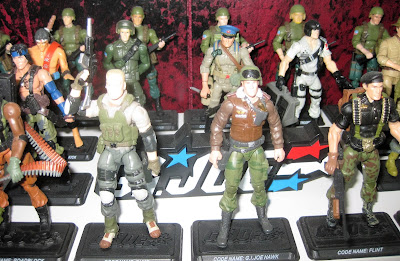 In closing, GI Joe: A Real American Hero is essentially dead. I’m okay with that. I have the comics, the cartoons, and a huge collection of toys. How much more did I need? Where else could it have gone? Sure – there are characters and definitely vehicles that I would have loved to own. But if there’s one thing I’ve come to understand from my almost forty years of toy collecting, it’s that we’re never going to have it all. Whether it’s because the company doesn’t make it or distributes it poorly or because something else shinier calls for your money, it’s good to know when to sit back and be happy with what you have. I don’t have a 25th Anniversary-style Killer WHALE, and I never will. And that’s okay.

Right around the corner we have an all-new iteration of the GI Joe franchise. The best part is that it’s bringing along some other old friends that otherwise never would have seen toy aisles again. And that’s great pop culture news.


Stay tuned to Needless Thigs and the Needless Things Podcast and we’ll keep you up-to-date on what’s happening with this crazy new concept!
Posted by Phantom Troublemaker at 11:00:00 AM