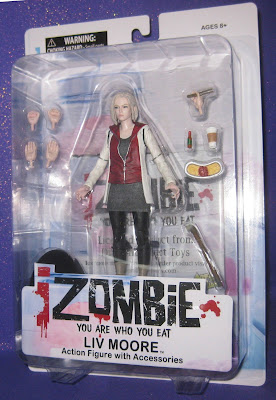 iZombie is a great television show.

Well, maybe it’s a very good television show with a great cast. There are times when the procedural elements get a little repetitive and dull, though the second season has been much better about balancing that stuff with character growth and zombie action. The cast, however, has been phenomenal from day one. Led by the irresistible Rose McIver, every character on the show is interesting and is portrayed by an actor that’s fun to watch. Aside from McIver as Liv, my favorite is Rahul Kohli as Dr. Ravi Chakrabarti, one of the most delightful characters currently on television. I would watch him in his own spinoff show even if it didn’t have zombies or Rose McIver.

Obviously I am hoping that a Ravi figure is coming soon.

I read the first couple of issues, or maybe the first arc, of the iZombie comic book back when it came out. I remember liking it quite a bit, but I have no idea why I stopped picking it up. I do know that the show is only slightly based on the comic.

Anyway, the show is one of the ones I look forward to watching every single week. It’s not one of those habit shows that you watch just to get it off of the DVR. So between that and the fact that McIver is a stone fox, I was definitely going to be buying this figure.

And Ravi, if (WHEN) they make him.

I go back and forth over whether or not Liv’s skin is pale enough. That’s okay, because so does the show.

Otherwise the figure looks great. I’m sure this outfit is pulled directly from the show, but it’s definitely sort of a signature look for Liv. It’s not like they grabbed some random, weird set of clothes just to make the figure look a certain way.

Also there are tons of accessories, and that’s good.

Diamond Select wins with the basic blister card! Aside from a completely resealable box, there’s no better packaging in my opinion.

The blister is big and allows plenty of space for the contents. The graphics are simple, but reflect the look of the show’s promotional materials. I like how clearly everything is displayed in the blister – no elements are concealed under the insert.

The back gives a bio for Liv and credits Gentle Giant as the sculptor. That is everything I need in toy packaging.

The head sculpt is fantastic. Rose McIver has very distinctive features and Gentle Giant captured them. The jaw and cheekbones had to be just right and they are. The hair also had to be just so. Liv’s zombie hair looks and hangs a certain way; if you watch the show you know what I’m talking about. The figure’s hair has just the right amount of detail to show the tangles and thickness that looks oh-so stylishly messy (and dead). The paint is excellent. Liv’s eyes stand out against the paleness of her hair, lips, and skin. The black eyeliner gives her that Mike Allred-designed look. The eyebrows on mine aren’t quite even, but it’s only noticeable up close.

Liv is sporting a lab coat and hoodie over her dress. These are separately sculpted from her lower abdomen to allow for a joint. It’s an ingenious design and it gives the plastic clothes a great look of being actual layers. While the dress has actual sculpted texture with a wash of paint to enhance it, the hoodie and lab coat appear different purely through paint. The hoodie has a wash of black in the folds to give it the look of thicker, sturdier material. The lab coat is almost pure white, which makes it seem lighter. I like how the pockets are sculpted to bulge out slightly and look like actual lab coat pockets instead of just raised squares.

They missed the mark a bit with the paint on the hoodie’s drawstrings. They don’t quite connect and are a little odd if you look closely. The zipper, on the other hand, looks great. This is one of those, “it’s probably just me” things, but sometimes I’m bothered by action figure zippers. If they’re even painted at all they’re often dull or black or something. Liv has a bright, shiny silver zipper and it looks great.

The shoulder joints are nice and snug and don’t have the oversized openings that some coated figures do. Liv’s hands are interesting in that they are sculpted wide open – each finger is distinct. They look great and aren’t sausage fingers like a lot of figures have.

Under the lab coat Liv’s dress is slitted up the sides. This might seem a little saucy for Liv (unless she’s eaten hornball socialite brains), but it’s in order to accommodate her superior leg articulation. More on that in a bit.

The figure has black leggings with fantastically sculpted socks and shoes. The socks have little folds and stuff and look great. If you’ve been following my toy reviews on Needless Things for any amount of time, you might know that action figure shoes are a thing I pay (too much) attention to. Liv Moore has some great shoes. Despite having a big ol’ joint at the ankle (which I am in favor of), they look really good. The laces are well-defined and the heels are thick enough to actually support the figure standing unaided (unlike many of Hasbro’s female figures).

Liv Moore comes with five extra hands, a coffee cup, a bottle of hot sauce, a pipe, a pan of noodles and brain, and a stand.

The extra hands all look just as good as the stock hands. They switch out easily and interact with the various accessories quite well. I love the chopstick hand. The chopsticks are a softer plastic, so you don’t have to worry about snapping them off. I’m not saying don’t be careful, but don’t be too worried, either.

One of the things I love about iZombie is the cooking sequences. Liv has to eat brains in order to avoid devolving into a mindless zombie. This is why she works at the morgue. One of the side effects of being a zombie is the loss of the sense of taste, so Liv likes her food HOT. Hence the little bottle of hot sauce, which looks great and totally isn’t Tabasco. The coffee cup looks real-world accurate, as well. The pan of noodles is nice and shiny (like the zipper) and the noodles look great. I do have an issue with how they did the brains, though. Rather than looking like chopped up brain, it looks like a tiny entire brain. I mean, it looks really good, but it’s odd that there’s this little, out-of-scale brain here. This could’ve been better, but I get that they were trying to make it very clear that this is brains.

The pipe looks great, but it’s just a pipe. The figure can hold it and look all menacing despite being adorable.

The stand is superfluous, as the figure can stand just fine on its own. But it’s the thought that counts.

DST didn’t have to make this figure as articulated as they did, and they did a fantastic job of it.

As a character, Liv Moore mostly stands, walks, talks, and occasionally has a zombie freak-out. None of these require super articulation, but Diamond worked with the aesthetics and packed in as many meaningful joints as they could. As a result, you can achieve tons of poses with this figure. It’s always very rewarding when I spend a lot of time figuring out just how much a figure bends and how many poses can be achieved, and Liv definitely delivered a surprising variety. Chances are she’ll end up on the shelf getting ready to eat brains, but she can do all kinds of other things if you’re so inclined.

Stop it – I’m talking about sitting and kneeling and stuff.

The accessories are plentiful and all make sense. The figure can interact with them all in natural ways – you don’t have to struggle to get anything to look right.

iZombie isn’t an action-packed superhero show and at the end of the day Liv Moore is pretty much just a girl in regular clothes. A staggeringly hot girl, but a civilian nonetheless. But if you love the show and like having little zombie people standing around on your shelf, this is a good figure to have.

But that has nothing to do with this excellent figure!