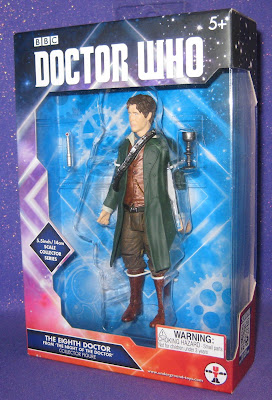 It’s been a while since I’ve reviewed any Doctor Who toys. Also, that’s the most times I’ve used the same word in a title.

Part of the reason it’s been so long is that Underground Toys/Character Options decided to launch an entirely new scale of action figures a couple of years ago. They switched from the five inch scale to a more standard 3.75” scale. This might seem like a wise decision, particularly since they were trying to penetrate the US market at the time, but the 5” scale figures had been around for some time and collectors like myself had no interest in changing scales. Also, since the toys were imports, the prices didn’t do the new line any favors.

On top of that, I was just starting to become cognizant of my dissatisfaction with current Doctor Who.

I basically stopped collecting Doctor Who figures at that point, though I didn’t write a whole post about it.

Now the powers that be seem to have recognized the error of their ways and have started releasing single figures in the five inch scale. Since they’ve resumed this scale in earnest we’ve gotten several Tenth Doctors, a new Jack Harkness, the Twelfth Doctor, Clara, the Curator, Missy, and this fella. 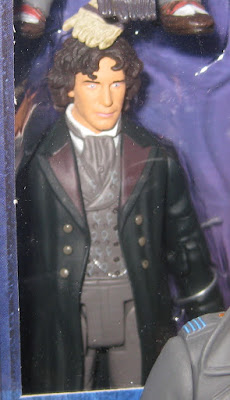 We’ve had two other figures of Doctor Eight – one in the fantastic (and possibly due for an update) Eleven Doctors Box Set: 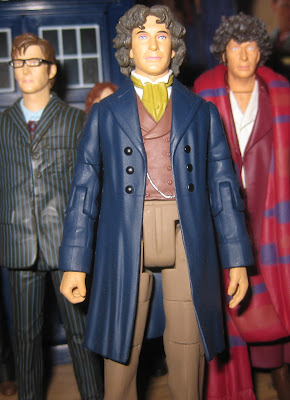 And the other in one of the Fiftieth Anniversary Doctor/Dalek sets.

Both of those use the costume from the television movie, though in different colors. While I never had an issue with Paul McGann’s Wild Bill Hickok duds, a lot of people didn’t care for them and I have to admit that what he wore in the “The Night of the Doctor” short seemed far better for adventuring around space and time than Party City’s “Old West Gambler” costume.

Since I’m talking about “The Night of the Doctor”, I suppose I should address the recent news that its writer, Steven Moffat, is stepping down as the showrunner for Doctor Who.
I’d love to be excited about it. Moffat has driven my love of the franchise into the ground. If my son hadn’t for some reason wanted to watch the last season of the show, I wouldn’t have. The above link provides more detail about that than you’ll ever want, but the point is that I should be celebrating Moffat’s departure.

Given the length of his run, there’s no denying the BBC was satisfied with what Moffat did with Doctor Who. They want more of that. And so they picked Chris Chibnall to replace him, a man who is very much part of Moffat’s regime. It was like when George Bush succeeded Ronald Reagan. Expect more of the same, but probably watered down.

As far as credentials, Chibnall is a lifelong fan of Doctor Who, but I think we’re all grown up enough to know that letting fans run the show is not always good. Often quite the opposite. He wrote eight episodes of Torchwood, a show that I loathe, including the execrable “Cyberwoman”, which holds the honor of being the worst fifty minutes of science fiction I have ever had the displeasure of enduring.

Chibnall has also written some modern Doctor Who. Among his script credits are “42”, which I liked, the 2010 stories that brought back the Silurians, which I liked, “Dinosaurs on a Spaceship”, which I loved, and “The Power of Three”, which was one of the worst stories I saw while co-hosting Earth Station Who.

That’s quite a mix of bad and good. I don’t know what to expect from Chibnalls’ reign – aside from the departure of current Doctor Peter Capaldi – but I don’t really care. I still adore Doctor Who as a franchise. There are plenty of stories from 1963 to 1989 for me to enjoy, and 2005 to 2010 isn’t too shabby, either. If Chibnall is better than I expect and turns the franchise around, great! If not, I’ve made my peace with Doctor Who not being for me anymore.

As far as Capaldi goes, I’ll be reviewing his new figure soon and will get into my thoughts about him then. For now, here’s a figure that brings to mind nothing but positive thoughts!

For as much disdain as Doctor Who fans expressed over McGann’s previous costume, this isn’t honestly that different. It’s less costume store-looking and has enough elements that aren’t quite Old West to look cool and fit better into the Doctor Who wardrobe. 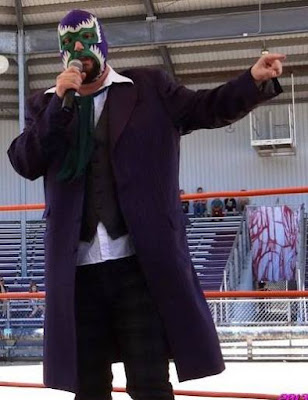 Side Note: It is entirely possible that this and Matt Smith’s second costume influenced the “standard” Phantom Troublemaker costume I adopted a few years ago. 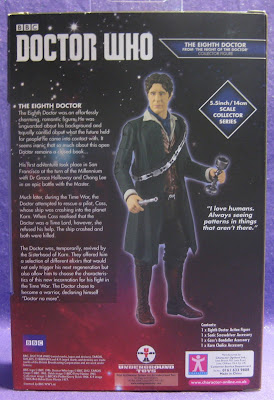 This window box is entirely too much packaging for this figure, but if you’re going to be charging $24.99 for a five inch scale figure, I suppose it needs to look fancy.

That being said, it is a beautiful box. The graphics are rich and colorful and the interior features the “space gears” design that the show has been utilizing lately.

I’m very happy with the biography on the back. It doesn’t specifically get into Big Finish territory, but it also doesn’t just say “The Doctor visited the Sisterhood of Karn and regenerated”. It actually does flesh out the Eighth Doctor a bit. 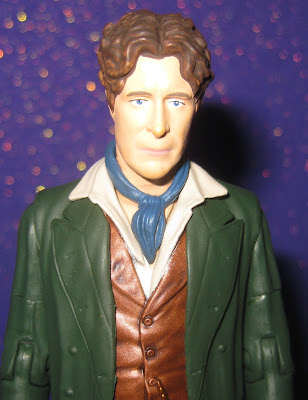 The head sculpt perfectly captures McGann’s expressive but slightly mournful countenance. The hair has plenty of character and detail and a nice wash to give it more definition. The eyebrows are just kind of blotted on, but they look okay. The eyes aren’t so much sculpted as painted, but the way they’re done works at this scale. 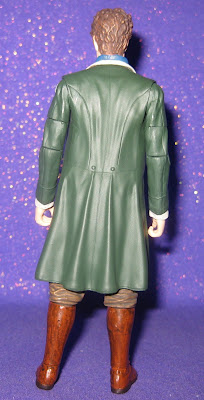 The Doctor’s coat looks a bit plain at a glance, but once you get close up there’s a bit of character. There are wide lapels with sculpted buttonholes and buttons to either side. Interesting panels run down the front and back, with a pair of buttons on the back. I love the shape of this piece – how it flares out as it goes down rather than just hanging straight. The main portion is sculpted separately from the body of the figure, which looks much better than is it was all one piece. 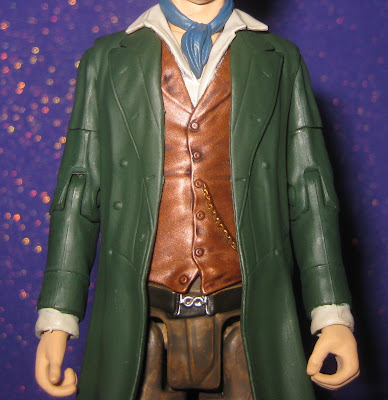 Under the coat are a shirt, vest, and scarf. The scarf is – like the coat - a separately sculpted piece. Like all of the figures in this line, the neck is part of the head rather than the torso, which makes the collar look better than what we see on other lines. I’m a big fan of how Character Options uses layers of sculpting. The vest has cleanly sculpted lapels and buttons, as well as a watch chain. The paint looks great and gives it a nice, leathery look. The chain has some well-applied gold paint.

The Doctor also has a belt with a bit of a swashbuckling look to it. It hangs low and has a buckle that resembles the symbol for infinity – a nice touch. 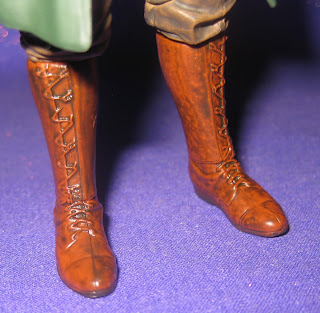 Well-sculpted and painted trousers are tucked into tall boots. The laces on the boots are distinct and well done. I like the paint on the figure overall, but it is a little weird to have so much wash on the boots, trousers, and vest and no detail on the coat. It’s not bad, just slightly odd. 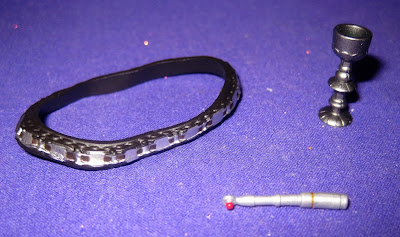 The Doctor comes with a bandolier, a sonic screwdriver and a goblet. 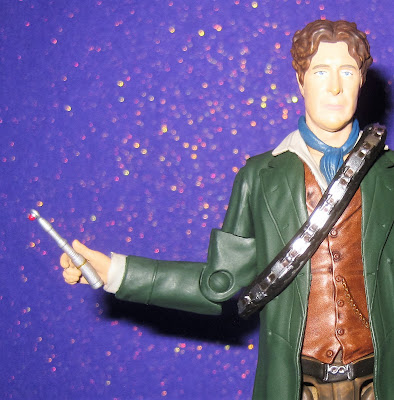 The sonic is the Eighth Doctor’s, which is actually a bit different from every other Doctor’s despite resembling Four’s. It has three colors of paint, which is something of a phenomenon when you look at accessories from other toy lines, let alone something this small. It’s made of a sturdy but slightly flexible plastic and fits perfectly into the figure’s hand. 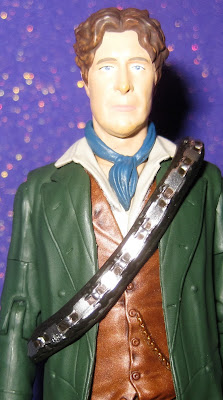 The bandolier is an interesting touch considering how unladen the Doctor typically appears. It's slightly bulky on the figure, but that's just because of it being a separately sculpted piece. I prefer that to it being permanently attached to the figure. The sculpt and paint are great. It's a well done accessory. 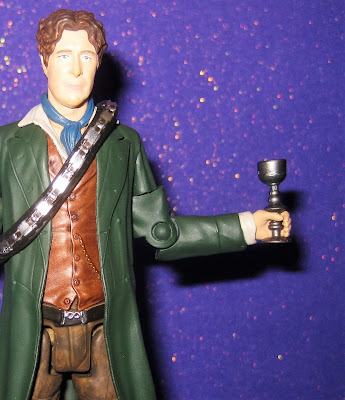 The goblet is the one the Sisterhood serves their magical regeneration juice in. It looks great and has a nice wash of dark paint on it, but I wish it had something inside. For being the catalyst of the Doctor’s most controversial regeneration, it’s a little underwhelming. Not “cup of a carpenter” underwhelming, but still. It fits perfectly into the figure’s hand and does not, in fact, change the figure into John Hurt. 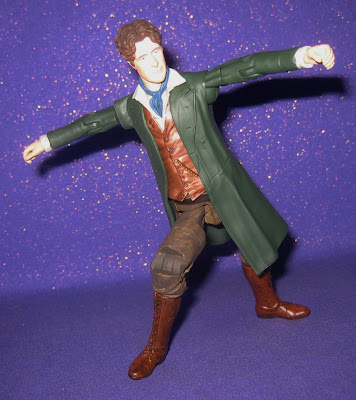 These figures tend to be “pretty good” in the Fun department. As I mentioned above all of the accessories work nicely.

The articulation is far better than the first releases in the line, but not up to the standards of Hasbro’s 3.75” or 6” figures. You get swivels at the neck, biceps, wrists, thighs, and boot tops. The shoulders and hips have hinged pivots and the knees and elbows are single pivots. He can do many of the things that the Doctor might do, but is a bit more limited than I’d like. The worst thing on all of these figures are the cut joints on the biceps.

They sculpt the arms flat rather than round, so if you turn those joints it looks terrible.

Still, this is the Doctor, not Rey Mysterio, so he really only needs to be able to aim the sonic screwdriver and stand as though he’s monologuing. 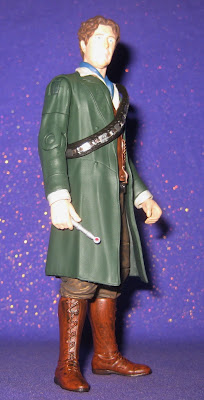 While the price is utterly absurd, I always end up satisfied with these figures. As different as the characters and monsters look, there’s a certain uniformity across the line that other toy lines don’t always accomplish. They all share a certain look and style. And I can’t quite put my finger on it, but there’s something distinctly British about them.

To me, this figure was a must-have even though I have both of the other McGann figures. It looks fantastic and, to me, fits in with the rest of the Doctors much more organically than the television movie versions. The costume also provides a beautiful visual bridge between the classic series and modern Doctor Who. 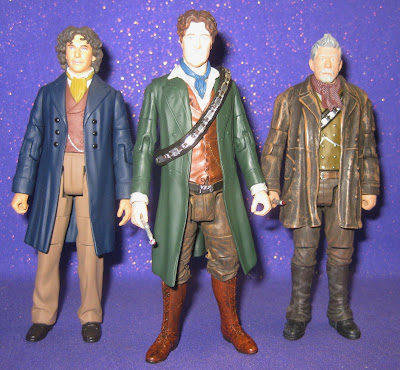