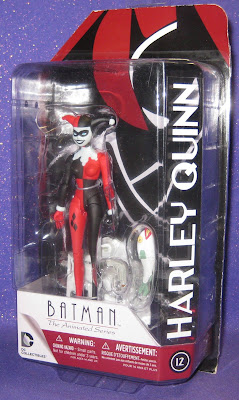 I’ve fallen off a little bit with these DC Collectibles Animated figures.

After six years of reviewing action figures and toys, the thrill isn’t what it once was. I still like reviewing stuff, but I have to switch it up a lot more frequently. Regardless of how many different characters inhabit any given line, there’s a certain sameness that gets old. I actually have to give this line credit for keeping my interest as much as it did last year.

Harley Quinn is very popular. I was going to start this paragraph with, “everyone loves Harley Quinn!”, but much to my surprise this is not the case. The other day the judgy and prolific io9.com spoiled the contents of the most recent issue of Harley Quinn in the headline of a Facebook post. I commented beneath that they did so and as a result was notified when others commented (until I got tired of it and turned off the notifications). Many people agreed with me that io9 were dicks for the spoiler, but a large number of people stopped by just to talk about how much they hate Harley Quinn.

This is an internet phenomenon I do not understand. If someone posts a thing and you don’t like or agree with it, move on. No reason to shit on another person’s thing (unless they’re spoiling stuff, of course). So all of these people were posting about how Harley is worthless and pointless and anyone that likes her is stupid, etc. I don’t particularly care what these people think of Harley Quinn, but I found it so odd that they needed to express their vitriol in a forum that was not devoted to that.

Anyway, I like Harley. I liked pre-New 52 Harley, but I actually like her more now thanks to Amanda Conner and Jimmy Palmiotti’s ridiculously fun run on the solo book. I like diversity and appreciate her in all kinds of different costumes. I think changing clothes fits her character and actually makes a lot more sense than her just wearing the harlequin onesie all the time. But this is the definitive Harley Quinn as most folks tend to think of her. This is how she first appeared on Batman: The Animated Series and is pretty much the only look she had until a few years ago.

This is the somewhat more reserved Harley that appeared on The Animated Series. She got cuter and more exaggerated on The New Batman Adventures, which is how I prefer her. In all honesty I didn’t really think about that until DCC showed the latter version at Toy Fair this year.

The colors on this figure pop nicely. The red is bright and the black is flat and dark. The proportions look good and what little detail there is seems solid. She is super tiny, though, so I’m a little nervous about opening her.

They nailed that wicked smile. The shape of the mouth and the way the teeth are lined up gives Harley an almost feral look. The eyelids are sculpted a bit low so that the eyes also have a menacing look to them. This is the Harley Quinn that’s going to delight in your pain. She’s not as whimsical. Her hat has the right shape and the pom-poms on the ends are distinctive but simple. The lines between the paint colors are super clean, which is impressive when you’re dealing with strong contrasts like red, white, and black. Her pale, blue irises sit perfectly in the center of her eyes.

Most of her body sculpt is as plain as can be. One of the advantages this line has is how simplistic many of the characters are. I’m sure many of the females will share this buck. Harley’s distinctive collar is sculpted nicely and the little pom-poms are even raised and distinct from the rest of the sculpt. Ideally this would have been a separately sculpted piece, but it’s fine the way it is.

The arms are plain sculpts with the appropriate markings painted on. The lines are, again, precise and distinct. Harley’s cuffs don’t have the ruffle detail I expected, but they’re fine.
The hands are great. I love that we seem to be past the “everyone has mitten fists” stage of action figure development. More and more figures now have individual fingers and relaxed hand poses.

The feet look great and are cleverly engineered. The tops of Harley’s boots are that Peter Pan style thing. The ends of the legs terminate in a forward-facing peg and Harley’s feet are sort of like little slippers that plug onto those pegs. This is a huge problem that I’ll get into below.

Harley Quinn comes with four extra hands, a gun, a Joker fish, and a stand.

The hands are two fists, an open hand with a trigger finger, and an open hand. They switch out easily – but as always with pegs this tiny, be careful – and interact with the accessories.

The Joker fish looks just like it should. It has five(!) colors of paint that all look great. This thing is hilarious and I’d buy a ten pack of them if I could.

Harley’s pop gun is mostly solid grey with a cork in the end. The proportions are nicely goofy. It fits perfectly in the trigger hand and stays put.

The stand is a fancy bit of business with Harley’s design references on the base. I liked these at first, but now I’ve decided that they’re just too darn big. They take up so much space on the shelf. Fortunately, most of these figures can stand on their own. Most of them. More on that in a bit.

I’m a little let down that there aren’t more accessories. I’m going to assume that Harley’s trademark giant hammer didn’t come into play until later, but you’d think they could have come up with a couple more items to throw in here. And alternate, unmasked head would have been great. But again – I don’t think we saw that until The New Batman Adventures.

The shoulders, elbows, hips, and knees on this figure work pretty much like the rest of this line. They’re designed to provide articulation without detracting from the aesthetics of the designs. That’s important to me, as there’s no point in doing the line if they don’t get the smooth, simple lines of the characters right.

That being said, I don’t think that they could have out of this figure. Harley’s head barely does more than rotate. That’s disappointing, but it hardly cripples the figure.

The feet do that. The lack of ankle pivots limit the figure’s ability to pose so severely that it almost isn’t worth playing with. On top of that, something about this design has given the figure awkward balance so that it is one of the few that I simply cannot get to stand up on its own. That’s pretty bad.

The accessories are great and the bulk of the articulation is solid, but the feet ruin this figure for me.

Dammit. This is a great-looking figure. They nailed the paint and I love the facial likeness and expression. But those feet ruin it. I can’t give Harley too low of a score because everything else works, but I can’t recommend this one. I hope they figure out a better way to do her feet on the next one.

If you have to buy one, buy from Amazon and help Needless Things pay the bills!: