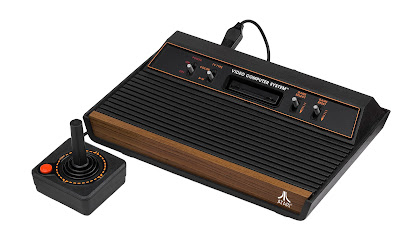 Our console had the “Difficulty” toggle switches as well.

This will totally drum up some traffic.

I was probably around five years old when my dad came home one day talking about Pac-Man. I didn’t know what it was and I didn’t understand why my dad was so excited about it. Quite frankly, to this day I don’t understand why he was so excited about it. He wasn’t exactly a fun and games kind of guy. But I think that’s just another indicator of how ridiculously big Pac-Man was and how much Pac-Man Fever had engulfed America in 1980. I can only imagine that all of his co-workers had the Fever and that he got caught up in the excitement.

It would be if I suddenly started liking college football or hunting.

I can’t remember the circumstances surrounding the Atari 2600 entering our home. I don’t know if it was a birthday or something; I don’t think it was Christmas. But I sure do remember that gorgeous, black and silver and wood grain console and the weird thing that connected it to the back of our equally silver and wood grain Zenith floor cabinet television. It wasn’t a plug. It was two U-shaped clips that you slid under a couple of screws on the back of the TV.

I was terrible at Atari games. I’d be surprised if I ever played one for more than five minutes at a time, though I’m sure my parents could tell you different. I do think that playing the Atari was the most time me and my dad ever spent together. It’s the only game system that he ever spent any time playing, and because of that some of my favorite games are those simple, old Atari games.

There was the one cartridge that had 27 “different” games on it – Combat. Those 27 games were just three games – tanks, biplanes, and jets – with nine different play options each. That variations were things like ricocheting ammo, invisibility, and speed. I always had fun playing tanks and to this day will play a round with ricochet ammo if it’s offered. The biplane game was okay, but I hated jets. I can’t remember if they were too fast or what, but I know I found it frustrating.

We had another one of those combo cartridges called Air-Sea Battle (they were really working hard on branding back then). It was the same general idea as Combat, but with more linear movement. I didn’t like it as much because you mostly just moved in straight lines and it made really annoying noises.

Even at that young age, I recognized that value packs like these were not the way to go. While, I might have enjoyed certain aspects of Combat, I was already aware that the real fun was in the cartridges that only had one game on them. The cool games took up a whole cartridge with their vast amounts of programming. Games where difficulties could not be set by a switch and if you wanted a different play experience, well gosh darn it you had to change out the whole darn cartridge. 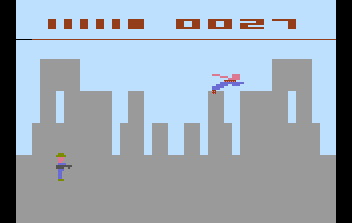 “Superman Atari 2600 screenshot1a" by Source. Licensed under Fair use via Wikipedia

This is one I did spend hours playing. Not because it was fun. It wasn’t. Not because I was good at it. I wasn’t. I spent hours playing Superman because the little character on the screen actually looked like the Man of Steel. Sort of.

The object of the game was to fly throughout Metropolis and catch all of the members of Lex Luthor’s gang. Every once in a while they’d blow up a bridge or throw some Kryptonite at you and you’d have to react accordingly. It all sucked horribly. By the time you fixed the bridge or found Lois Lane (who you had to kiss to get your powers back), all of the guys would have escaped from whatever kind of lousy jail cells they have in Metropolis. I hated Superman, but at least it looked like something.

Side Note: Writing this has left me wondering is this game might be partially responsible for my general disinterest in Superman. Maybe if there had been an Atari Batman game instead I’d be more favorable towards the Last Son of Krypton.

After doing a bit of research, I realize that my dad spent a damn fortune on Atari stuff. I don’t think he bought it all at once, but we had the second 2600 console (with the difficulty switches) and the following games – Combat, River Raid, Air-Sea Battle, Space Invaders, Missile Command, Action Pak, Canyon Bomber, Pac-Man, and Star Raiders. We also had some variation of Pong that had hockey games and stuff on the cartridge (I think). The main reason I liked playing those games was that they used the paddle controller: 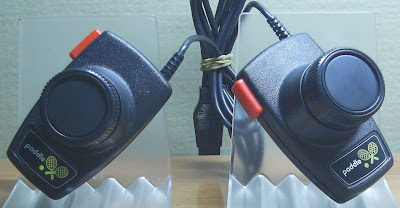 I don’t know why those are called paddles, but I thought using them was the most fun thing ever. One of the big novelties of the Atari system was the various controllers that you could use – more on that later.

A console and nine games may seem common by today’s standards, but when the Atari 2600 launched it was $199! And games were around $30 apiece. That may sound like a bargain until you realize that two hundred 1980 bucks in 2016 dollars is almost six hundred dollars. And those games were the equivalent of $87!

I worked in video game retail on and off from 1995 until 2004 and I spent that whole time listening to people complain about video games getting more expensive, all the while telling them that games were, in fact, getting cheaper. I’ll talk more about my time at Video Game Exchange, Electronics Boutique, and GameStop in a future post. For now, let’s get back to Atari.

You might notice that we had a bunch of combat and warfare games. This is because my dad was a military man that retired at the rank of Lieutenant Colonel. I’ve mentioned it before when talking about my love of GI Joe, but anything involving the Army (which is how I thought of all military stuff back then) was going to catch his eye. That’s why the tanks game in Combat got so much play – I liked bouncing rounds all over the board and he liked pretending he was driving a tank.

And blasting the shit out of his five year old son every eight seconds. 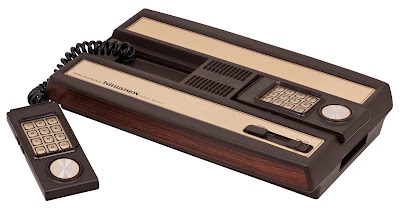 "Intellivision-Console-Set" by Evan-Amos - Own work. Licensed under CC BY-SA 3.0 via Commons

I want to take a moment here to discuss Intellivision. We did not own an Intellivision system, my best friend’s family did, so naturally I thought that it was way better than our Atari. They had a game called Snafu that was like the bike race from Tron, only I didn’t know that at the time. I just loved the game. But the one game that I really lost my shit over and that I could never convince my dad to buy for the Atari was Pitfall!

You guys, I was bananas for Pitfall!. All I wanted to do when I went over to that house was swing Pitfall Harry across alligators, jump him over insanely oversized and strangely terrifying scorpions, and hop him across crocodile heads. Years later when Super Pitfall! Came out for Super Nintendo it was one of the few games that I bought new. 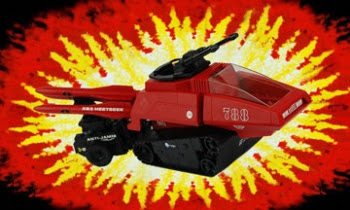 I was so into that game that I often chose playing it over playing with my friend’s GI Joe collection, which included several items I didn’t own, amongst them the coveted Sears Exclusive C.A.T. and S.M.S. Any chance I got to play with GI Joe stuff I didn’t have I normally took, but when I had Pitfall! on the brain I was insatiable.

Getting back to Atari, if I had to pick one game that was my favorite, it wouldn’t be Star Raiders.

I could never understand this game or how to use the keypad controller it came with. 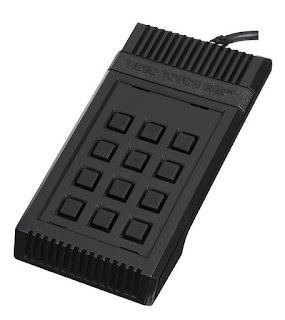 Seriously – I never accomplished a single thing. I don’t think I even dies because I think you had to travel somewhere to do it. All I could ever do was conjure up that stupid grid up there and look at it helplessly. 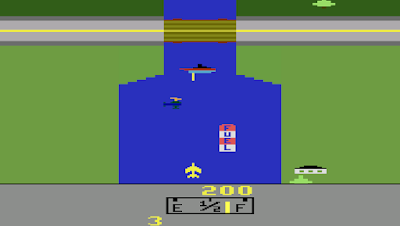 River Raid, on the other hand, was my favorite game, and my dad’s as well. It was the one I was best at and it had the most variety as far as what you were doing, things you were fighting, and landscape. Plus, we had this kickass controller that just felt perfect for a flying game: 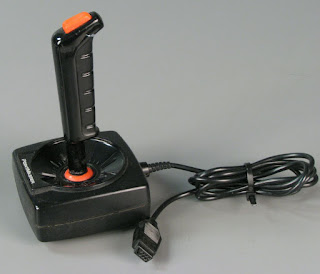 It’s called the PointMaster and it felt so much cooler than the standard Atari joystick. All the stock version had going for it was the neat little rubber piece around the base. This thing looked like it came straight out of a fighter jet!

For whatever reason, Dad lost interest in the Atari and eventually, with nobody to play with and Dad unwilling to buy new games, so did I. It ended up in a box, stored away for years. I had played as many video games as I needed to, at least until the marketing blitz that was Nintendo and its mascot, Mario assaulted my young brain and changed my life forever.
More on that next time!

In the meantime, if you enjoyed this post and have a video game reminiscence of your own, join the Needless Things Podcast Facebook Group and get in on the conversation.