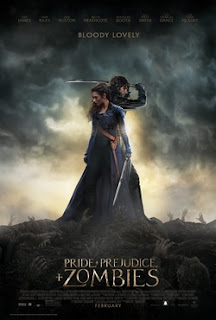 It is a truth universally acknowledged that a genre in possession of a good following must be in want of yet another movie. Sadly the charm of the 2009 mash-up book Pride and Prejudice and Zombies has been forgotten - especially by the people who made this movie. 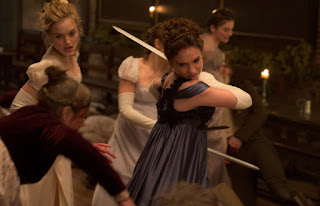 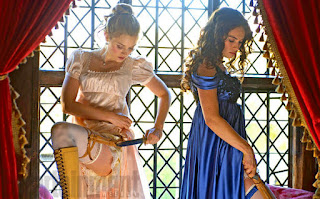 If you love zombies you'll be equally disappointed. Not only are they talking and thinking zombies, but you go so long without seeing them that you forget they're supposed to be there. I guess I could recommend this to Matt Smith fans because he stole the whole thing. I think we spent every seen he was in laughing hysterically. As much as I like Lena Headey and Charles Dance they were given very little to do here. While Charles Dance would have made a great Mr. Bennett playing the character from the source material most of his part was cut. I don't know if it was cut before or after filming, but it seems criminal under use him in this way. The same applies to Lena Headey. Everything she did reminded me of something else she'd done. Even her eye patch wasn't from the book so it must have been a leftover from her role in Dredd. Lily James was a pretty good Elizabeth Bennett, but since I'd only seen her in Downton Abbey before this I don't have much to compare her performance to. I was most disappointed in the choice of Mr. Darcy. In the book he's funny and makes a lot of jokes about balls. The dude playing him in the movie has no humor or charm. He's only saved from being too fey by the raspy  and slightly irritating quality of his voice. Despite what some might think I'm not even trying to compare him to the Mr. Darcy played by Colin Firth in the mid-90's. I really am okay with the idea of someone else playing Mr. Darcy. Matthew MacFadyen was fine in the 2005 movie version of Pride & Prejudice, and I would have been fine seeing someone else in the role. Not this guy though. The point of the book this is loosely based on is that the characters are the same as Austen's characters. They just happen to fight zombies. This guy isn't right for Mr. Darcy in any version. 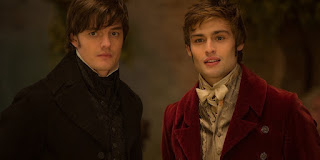 The fight scenes are well done and slick, but there just aren't enough of them. The costumes were also lovely, but I didn't know they made spandex leggings in early 1800's. Despite the fact that they talk they zombies look good, and it's clear some money went in to this thing. I just wish they'd gone with a script that had been more faithful to the book it's based on. Maybe it's something to do with the fact that it's been in some state of production since 2009. Maybe they thought a zombie audience wouldn't like all that Regency era fanciness. So I guess at the end of the day if you're not really in to zombies, like to watch girls fight with knives, and want to laugh at the antics of Matt Smith you might like this movie. If none of those things are your cup of tea then you might want to go watch Abraham Lincoln: Vampire Hunter again.


Beth got her start writing for a site called Movie Criticism for the Retarded (which has been revived as dorkdroppings.com. Check it out sometime), but was pulled out of an early retirement to write for Needless Things. When she isn't writing she plays video games and watches bad horror movies while eagerly awaiting the zombie apocalypse. She may try to save her husband and/or their cats, but luckily hasn't had to make those tough decisions yet.
Posted by bethv at 11:00:00 AM